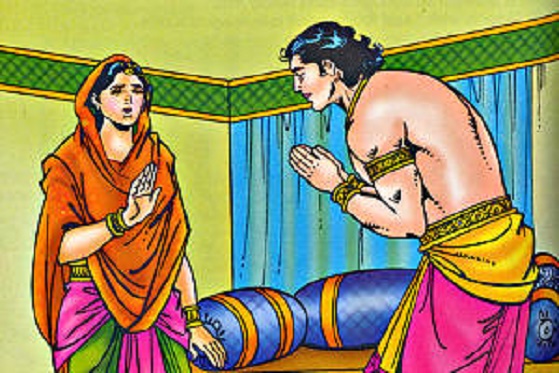 The second meeting Karna had was with Kunti. Kunti, the mother who had abandoned her first-born son and Karna, the son who could not bring himself to abandon the friend who gave him a kingdom. Karna-Upanivada Parva (an upa-Parva in Udyoga Parva) describes both these meetings and captures brilliantly the complexity of human relations and emotions at work.

After Krishna returned to the Pandavas after his meeting with Karna, Vidura had provided an update to Kunti of Krishna’s unsuccessful entreaties to the Kauravas. Kunti started thinking of the looming battle, and her mind naturally went to the warriors in the Kaurava army, who would pose the biggest threat to her sons – her five sons. Kunti correctly thought that Bhishma would be “kindly disposed towards the Pandavas” and that Drona would “never willingly wish to fight with his disciples.” This left Karna, who Kunti saw as the pivot around whom the war could turn.

I wrote in the earlier post that Krishna had approached Karna with as open and generous an offer as could have been made, by man or god. Krishna had made one last attempt at averting the war. Kunti was at this point in time more interested in the preservation of her five sons. With Karna fighting on the other side, there was no guarantee of the safety of any of her five sons. One way of ensuring their safety was to turn Karna over to the side of the Pandavas. “Karna has always been against the Pandavas and I am now tormented by that. Today, I hope to turn Karna’s mind towards the Pandavas. I will meet him, tell him the truth and seek to obtain his favours.”

Karna by this time knew about the truth of his birth. He would also have guessed that Kunti would be the next to come and meet him, and the reason behind such a visit. Thus, when Kunti came to Karna, Karna’s salutation to Kunti was that much more poignant as well as pointed – “I am Karna, the son of Radha and Adhiratha, and I salute you. Tell me. Why have you come here? What can I do for you?”

Kunti, touched to the quick, told Karna the truth of his birth – “You are the son of Kunti, not of Radha. And Adhiratha is not your father.” She then asked him to leave Duryodhana and come join the Pandavas. She ended her entreaty to Karna with these words – “The words ‘son of a suta’ will no longer be used for you. You will be a valiant Partha.”

The pejoration of a “suta” is what had been used to deprive Karna from participating in Droupadi’s swayamvar (according to some retellings of the Mahabharata, though not the Critical Edition’s), what had been used by Kripa to deny Karna the chance to duel with Arjuna, many years ago, by asking these pointed questions – “You should also tell us your mother, father and lineage and the royal dynasty of which you are the ornament.” Kunti had by that time come to know the truth of Karna’s birth. But, she had felt helpless then.

Karna’s remonstration with Kunti was different. It focused first on what Karna had lost through Kunti abandoning him after birth – “By casting me out, you have destroyed the fame and renown that I could have possessed. I have been born a Kshatriya, but I did not obtain the rites that were due to a Kshatriya. All this was because of you.”

Karna then asked Kunti “How can I abandon them?” “Them” referred to the Kauravas.

But, towards the end of his exchange with Kunti, Karna could not refuse his mother. He acceded to Kunti’s request, her real request, not the one that she told Karna about though. Karna told Kunti, “However, your appeal to me will not be fruitless. Though I can counter and kill them, I will not kill all of your sons in battle… The number of your sons will not be less than five. You will either be without Arjuna and with Karna, or if I am killed, you will be with Arjuna.”

Kunti then left Karna with these words – “But you must promise about the safety of four of your brothers. You have given me that pledge and you must discharge that promise.”

Here is one question. Did Karna refuse Kunti because of all the pent-up resentment against his mother? Or did he believe that Kunti had come to Karna not out of love for him, but more out of concern for her five sons? Possibly, this is the reason, because Karna instead made the promise to Kunti of not killing four of her sons. In a way, Karna sealed the fate of the war through what was possibly his last act of charity.

Here is another question. Why did Kunti, or Krishna also for that matter, not tell the Pandavas the truth about Karna that he was one of them, that he was the eldest Pandava? Would that not have stopped the war? Yes, most probably yes. But the Pandavas would have lost, without shooting a single arrow. This was not so much about avoiding war as winning against the Kauravas. Victory against the enemy could be had only by weakening the enemy. That Karna did not go over to the Pandava camp was certainly a setback, but the second meeting in particular did yield dividends. Karna did not forget his promise to his mother, and spared the lives of the four Pandavas during the course of the war. Had Karna killed either Bheema or Yudhishthira, would the course of the battle been different? Many will be inclined to think so. It remains in the realm of conjecture; a fascinating conjecture like so many other incidents in the Mahabharata.

When did Kunti break the truth to her sons? It happened after the war was over, and when Yudhishthira, Dhritarashtra, and others went to the Ganga to offer oblations to those killed in the war. This is recounted in the Jala-pradanika Parva (which, at 24 shlokas is the second shortest Parva in the Mahabharata). Kunti broke down and said this in a soft voice – [bold emphasis mine]

“There was a brave and great archer. He was a leader of leaders of rathas. He was marked with the auspicious signs of a hero and was killed by Arjuna in the battle. O Pandavas! You thought of him as the son of a suta and as Radheya. In the midst of the formations, the lord was as radiant as the sun. Staying at the front, he fought against all of you and your followers. He roamed around, gathering all of Duryodhana’s troops behind him. There was no one on earth who was his equal in valour. He was devoted to the truth. He was brave. He did not retreat from a battle. The one with unblemished deeds was your brother. Perform the water-rites for him. He was your eldest brother, born from the sun god. He possessed earrings and armour. He was brave. He was like the sun in his radiance.”

This gave rise to a tumult of emotions in Yudhishthira. The grief over the death of so many near and dear ones was compounded by the knowledge that they had ended up killing even one of their brothers – their eldest brother. Yudhishtira’s grief knew no bounds, and thoughts of renouncing his kingdom entered his mind. Thus, began the Shanti Parva – an aptly named parva. Here is a third question – why did Kunti finally break her silence when she did? I confess I do not know the answer to that one. I have thought, but no satisfactory answers come to mind.

Kunti had abandoned her first-born son years ago. She could not claim him back. Perhaps, she did not want to claim him, at least not before the war. She would acknowledge Karna as his son publicly only after his death. Karna had been abandoned by Kunti years ago, given a name and identify by his foster parents, and a place in society by Duryodhana. He could not abandon them. He chose to abandon Narayana, who had come to him.

Note: I have used Dr. Bibek Debroy’s unabridged English translation of the Bhandarkar Oriental Research Institute’s Critical Edition of the Mahabharata, published by Penguin, as my reference.