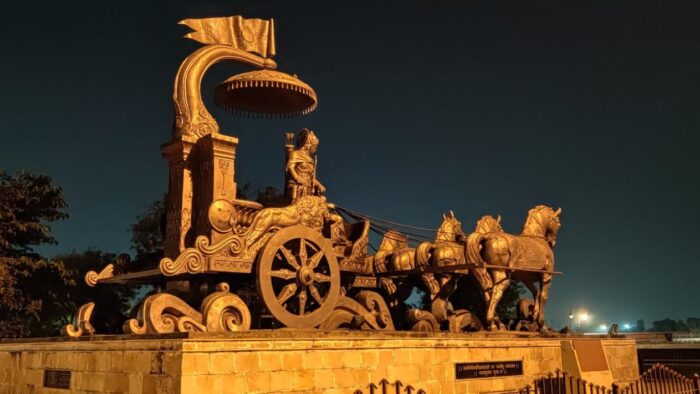 The Grant Trunk Road – possibly the oldest surviving highway in the world – starts out in what is now Bangladesh, makes its way through the Gangetic plains, crosses Delhi, and moving northwards, passing the town Sonepat, the historic battlefield Panipat, the refinery at Karnal, and along the way to Ambala and beyond, if you blink you miss it – Kurukshetra. Even as recently as a decade ago, in the absence of flyovers, it was routine to get stuck in hour-long traffic jams while trying to cross the intersections of these towns. There is now an overpass that takes you right over the intersection of the national highway and the State Highway 6 that makes its way to Kurukshetra on the one side and to Yamunagar on the other. So unless you are looking for the town, you are likely to miss it. But if you do remember to look left (if travelling north), you cannot miss the welcome arch over the road that leads into the city. Whether you are passing by or whether entering the city, do look at the impressive arch. If you do, you will spot the famous, immortal chariot from the Mahabharata atop the arch. Arjuna’s chariot, with Krishna the charioteer. Arjuna’s bow – the Gandiva – is down. As long as it stayed down, so did the Pandava’s hopes of winning the dharma-yuddha. One hand of Krishna holds the reins of Arjuna’s horses – literally and metaphorically – while the other hand is raised, in explanation. This arch is lit up at night, and the visage is all the more impressive, and indescribably evocative. 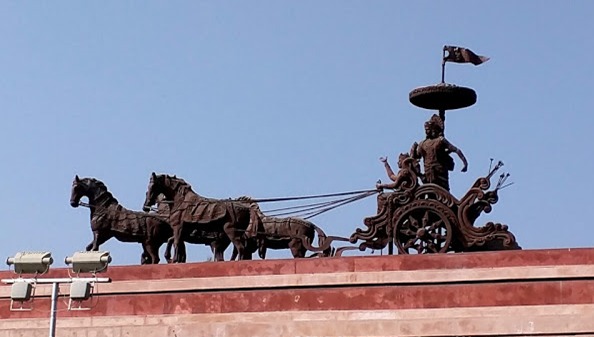 Arjuna’s chariot atop the welcome Arch

Modern day Kurukshetra is almost like any other modern day Tier 2 (or tier 3) town in India today – one road that is the “main” road of the town and which cuts a neat slice through the town, on both sides of which is the oldest and most bustling part of town, and which leads inevitable to the railway station. The railway station is approachable via either a manned crossing, or increasingly common over the years now, via a flyover. For years, and even now, this would be the only flyover in the town, and would lead into the main market of the town. It would be the “sadar” bazaar, or more commonly, just the “market.” Everyone knows what the “market” is. Malls are only now starting to make their appearance, and are still a novelty. The biggest draw for the mall is still the multiplex, and business at the mall depends on the movies playing. Kurukshetra satisfies most of the modern-day stereotypes of a small Indian town. 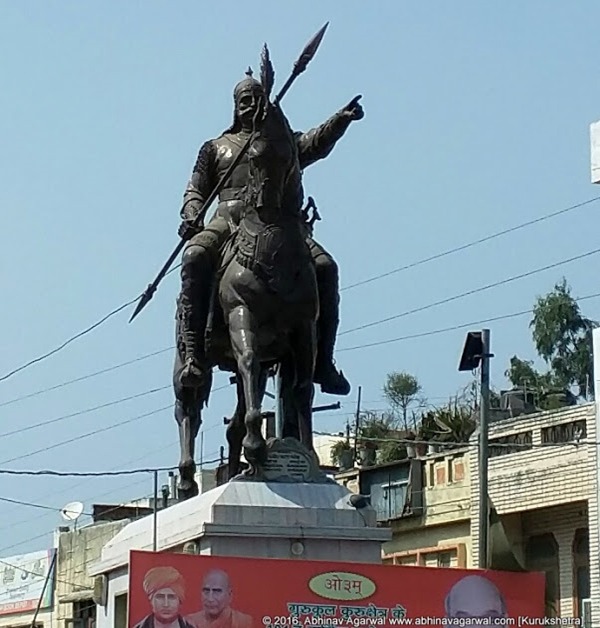 As an aside, Kurukshetra would be neither a Tier-1, Tier-2, nor Tier-3 town – it classifies as a “Z” grade town. Such classifications in India are a pristine example of its famed bureaucratic jumble. This is a population-based classification. The Sixth Central Pay Commission classified cities as “X”, “Y”, and “Z”. Before that there was a system based on HRA (House Rent Allowance) – A-1, A, B-1, B-2 and C. Then there was one based on City Compensatory Allowance. Not to be left behind, the Reserve Bank of India (RBI) maintains six tiers based on population that it calls “Classification of centres (tier-wise).” The RBI further muddies the waters by also having a “Population-group wise classification of centres.” Therefore, according to the RBI, a town with a population of more than one lakh is a “Tier-1” center, and also an “Urban center”, but not a “metropolitan center”, since that requires a population of more than ten lakhs. Anyway.

I said “almost”, because Kurukshetra is different from most other towns in at least two respects. One, the sale (and purchase) and preparation of meat is banned in the holy city of Kurukshetra. This was done in 2012, on the orders of the Punjab and Haryana High Court. Of course, the enterprising few in the town still manage to flout it, and which is an open secret, but one is still thankful for these tender mercies granted to the vegetarians and animals. Second, while prohibition (of alcohol) is now no longer banned in the state of Haryana, Kurukshetra is one town where its sale is still banned. Again, hotels and restaurants are known to provide happy hours to trusted clients. The letter of the law is in the books, while the spirit lives on in hotels. All are happy.

Today, Kurukshetra’s economy is agrarian, and tourism. Most of the workers are employed in some form of agriculture – as cultivators or as laborers. Inside the town – remember that the district of Kurukshetra is different from the town of Kurukshetra – you are likely to find rice mills.

Gunny sacks with rice piled in the compound of a rice mill.

Unlike potato factories (a leader of a national political party talked about “aloo ki factory” – potato factory – thus bringing the phrase into notoriety), rice mills don’t create rice. Rice mills are where the harvested rice is dehusked, producing the white, edible kernel. Given the abundance of cheap labor, much of the rice milling in India is still done manually – the pre-cleaning, drying, dehusking, paddy separation, etc. 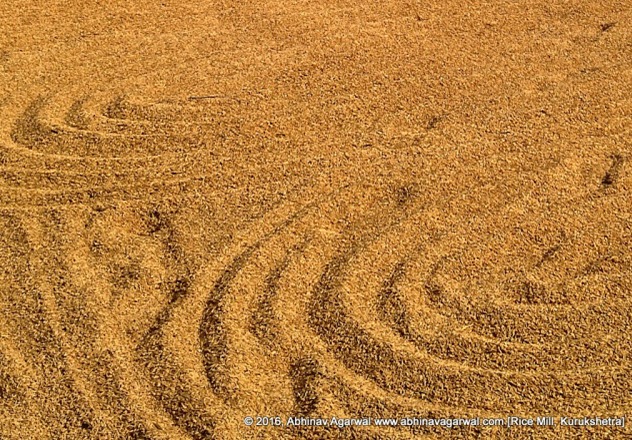 The husked rice needs to be dried before it can be dehusked. This minimizes breakage

Rice laid out to dry before the dehusking process, Kurukshetra.

The harvesting takes place during the months of September, October, and November. As the rice is harvested, the trucks start streaming into the rice mills – all day and all night long. They are either carrying the harvested rice in, or the dehusked rice out to the wholesale markets for sale. The rice mill operates all day and all night long. It can be difficult to gauge the scale of operations at these rice mills from afar. If you consider the fact that each bag weighs about fifty kgs, there are several lakh kilos of rice in one single mill at any given point in time. The rice mill in this post had close to half a million tonnes of rice. The rice is spread in the open at the start of the day, spread over the ground, and at the end of the day packed into bags again. Which is why you see the blue tarpaulin sheets – they are in case there is rain. Which is why rain is murder for harvested rice. Which is why it is an irony of sorts – rice soaks in huge amount of water during cultivation but rain during harvesting or dehusking can destroy it. 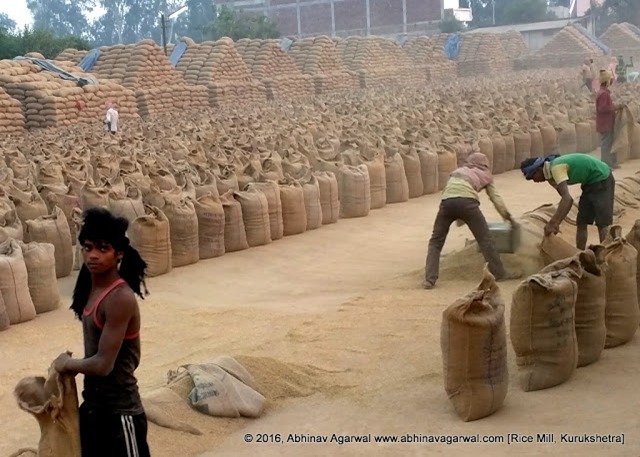 Rice being stored back into gunny bags at the end of the day, Kurukshetra.

At one point in time in the not-too distant past, these rice mills were mostly on the outskirts of the town. Land was cheap on the outskirts. Not any longer. Many rice mills have closed down, to give way to malls or other more lucrative businesses. As the town has expanded, land has become more and more expensive. Large, undivided plots of land like the ones at rice mills, is precious. The money a rice mill can generate is dependent on the amount of rice it can process. This in turn depends on the kind of machinery present, which is expensive. At some point Economics 101 kicks in, and the expected returns are no longer remunerative enough. Which means that such rice mills as the one in this post will also give way to other developments over the next decade or two. The landscape of the town will change. Malls will replace mills.