Vedic Culture: The Difference It Can Make in Your Life 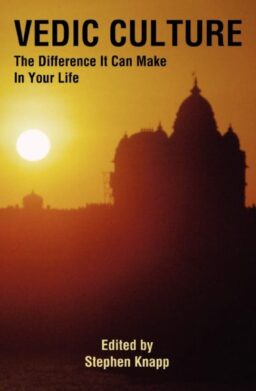 What Vedic Knowledge has to Offer the World: A Different Kind of Primer

It sometimes feels that these days everyone is writing, and everyone is talking – all the time! There are so many books being written, and it does not matter if there is no publisher willing to publish them.

The authors can self-publish, and Amazon is willing to sell it to the world, one print-to-order copy at a time. If there is so much being written, is there anyone who is reading these books? Like the philosophical thought experiment which asks, “If a tree falls in the forest and there is no one to hear it, does it make a sound?” we may also ask, “If everyone is writing, is there anyone reading?”

While this intro to a review of “Vedic Culture: The Difference it Can Make in Your Life,” maybe rather discomfiting, it is offered with the hope that some people, especially those busy writing their own books, will indeed pick this book up to ponder over their own fate in this world of maya, and the fate of the world in the grip of busy human bodies.

We are living in a world that is teetering on the edge of disaster – overpopulation, unbridled consumption, over production, environmental disasters, and nature gone awry. One year of the COVID-19 pandemic has led to the deaths of about 2.5 million people, but the world population in just these first fifty days of 2021 has increased by more than twelve million!

We are close to 7.9 billion people in the world now, and by 2060 we will be ten billion of us — consuming more, producing more, and accelerating toward some kind of doomsday where the earth will heave a sigh and bury most of us dead. What should we do?

Well, we have multi-billionaires like Bill Gates who lives in Seattle in a 66,000 square foot, $127 million mansion, and who is worth 80 billion dollars, writing a book titled, “How to Avoid a Climate Disaster”, but the irony of it seems lost on the world as the book is a bestseller.

The man himself is interviewed repeatedly on this matter of saving life on this planet and neither the millionaire interviewers nor the billionaire interviewee wants to ask uncomfortable questions of each other’s lifestyles, and what they should be doing to save humanity.

Then there are the “self-help” books, churned day in day out, urging people to do this, that, and the other to “find themselves,” to “discover themselves,” to “be yourself,” and what not. Life lessons have been purveyed since the beginning of human history for the human world has been in crisis for long. The human species has taken over the earth, multiplied rapidly, and discovered ways of keeping death at bay. We have presented ourselves with a conundrum: the mor we are, the less we have of other life, and the longer we live, the faster we reach doomsday. However, seers who have pondered the human condition have shown us the way out of this box. There have led us to the water, but we have refused to drink.

The “who are we?” “why are we here?” and “where do we go from here?” questions are perennial, and answers have ranged from the deeply ignorant to the deeply esoteric, with little palliatives thrown in to soothe the anxious nerves of the questioners discombobulated by life’s “whackathons”. So, what is it that can be said that has not been said and shared before? But it is like asking whether good music has not been made before, or pujas performed before, or pilgrimages taken before.

Therefore, good books on the “condition of man” need to be written and read again in the hope that the many “walking wounded” in the world can be made “happy, energetic runners,” understanding that limits to consumption and desire cannot be placed by engineering the outside world, but by discovering the true nature of being human.

This book, edited by Stephen Knapp, is written with that intention. “Vedic Culture” is not just a compilation of essays by authors telling us how they discovered yoga and meditation, and found meaning in life, or satisfaction in their relationship with the world. Yes, there is some of it, and readers may indeed wish there were a little more of it, because in the recounting of life struggles, and what and who came to their rescue, we will find much that is appealing and elevating.

Evoking rasa is important in triggering the dormant quest for the higher and rousing us from apathy and distress.

“Vedic Culture” offers seventeen essays, nine of them in Part I of the book titled “The Vedic Spiritual Paths,” and another eight in Part II, titled, “The Vedic Arts and Sciences”. The foreword by David Frawley (Pandit Vamadeva Shastri) gets the reader primed to read the rest of the book while giving an overview of the nature of the Vedic understanding of the cosmos, and Vedic practices and traditions that enable us to live dharmic lives.

As he says, “Vedic knowledge teaches us how to work with these powers of the conscious universe from the biological forces in our bodies, to the psychological forces in our minds, to the spiritual energies of the soul but as linked to all the energies of the cosmos, which are part of one greater being” (p. 9). The compilation of essays in the book, he says, does not “simply… extol the value of Vedic culture, (but) it aims at showing its relevance for everyone today, including for those who may not have previously considered it to be important” (p. 12).

Stephen Knapp’s introductory essay sets the pace for the rest of the book. He writes about growing up in a small town in Michigan, discovering Christianity’s dark underbelly, and spending his youth in search of truth and wisdom.

He writes about meeting people who had turned to vegetarianism and to meditation, and how he made it to the Krishna Temple in Denver tired of his music gigs and seeking spiritual rest. Knapp takes us on a quick tour of the Vedic world, and worried about the dangers of Western theological dogma and what harm it has already wrought, he argues that “India must remain the homeland of a living and dynamic Vedic culture” (p. 27).

Lessons in yoga, meditation, and the setting of the inner compass right have been shared with the Western world for at least a couple of centuries now, but instead of the West learning from what India has to offer, it seems like India and the rest of the world have bought into the giddy and greedy pursuit of material wealth and pleasure wholesale, proffered by the West, bringing us all to the edge of the cliff from where we collectively stare down into a calamitous future. Thus, all the palliatives that Gates and the United Nations or the well-paid scholars sitting in their plush offices in think tanks offer will not help us figure out fast enough how to stop us from careening into a death spiral.

They cannot help because they are all into “outer engineering”: how to trade in carbon credits, how to reuse stuff, how to send us to Mars, how to tap the Moon for water, mine a comet for minerals, how nuclear power is the answer to reducing carbon levels, etc.

They ask us to “reduce, reuse, recycle,” but these mantras, offered also by concerned city mayors to professors teaching at local universities have been mere exhortations disengaged from a learning and understanding of the true human self. They make for only temporary and ineffective band aids: overflowing garbage and recycle bins in front of every household in the US is a clear indication of that.

Each of these essays offers a quick peek into the vast world of Vedic knowledge, and as such this book is an interesting primer for those Westerners beginning their journey on the meditative and yogic path, as well as an introduction to Indian and Indian American readers who want to know more about what some Americans have found on their spiritual journey, and with whom they have collaborated to walk this path that the ancient Hindu rishis have laid for us.

What I wished, however, as I read Knapp’s essay as well as those by Robert Taylor, Jeffrey Armstrong, Tom Beal, Andy Fraenkel, and others in the first section of the book was that these essays would have had much more appeal to the lay reader if the authors had spent a little bit more time describing their personal journeys: for in the telling of those tales would be revealed the beauty and the power of Vedic knowledge. Each one of these authors, I believe, has a moving tale to tell, just like what Baba Rampuri recounts in his “Autobiography of a Sadhu,” or Narvada Puri reveals in her “Tears of Bliss”.

We need these stories, as well as the important lessons in Vedic science, Ayurveda, Vastu Shastra, etc., to ensure that we are not consumed by greed, and that we only consume what we need. What might have also made the book more appealing would have been to include a few well-chosen graphics (there are only a couple) to offset the text-heavy pages.

Yes, there is still the challenge of clothing, feeding, and offering shelter to the ten billion people by 2060. But without a massive transformation of our mindset, and a change in our hearts, and without a clear guide for our spiritual quest that task would be unmanageable.

“Vedic Culture” includes an informative glossary and offers a subject index, useful to lay readers as well as scholars. The book is published by Vedic Friends Association (VFA), a 501C3 nonprofit organization whose mission is “… to Present, Preserve, Protect and Promote the Principles and Practices of the Universal Dharma, in all its dimensions.”

VFA’s current president is Benny Tillman, aka Balabhadra Bhattacharya Dasa, an African American Hindu, and a direct disciple of Swami Prabhupada, the founder of ISKCON. Stephen Knapp (Srinandan Das), the editor of the book, is the founding president of VFA, and the fine foreword to the book is by David Frawley (Pandit Vamadeva Shastri), founding chairman of VFA.

While the book was first published in 2005, it is a book that should be on top of the reading list for all those who seek to steer their lives in the right direction, and those who are concerned about the fate of their fellow human beings.

The Wonder that is Sanskrit is available on Amazon.