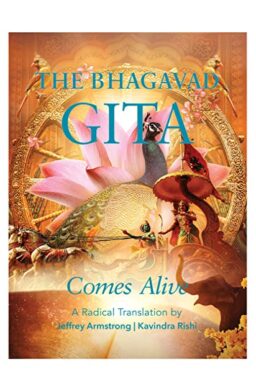 Everyone wants to quote Thoreau on the Bhagavad Gita – “In the morning I bathe my intellect in the stupendous and cosmogonal philosophy of the Bhagavad Gita in comparison with which our modern world and its literature seem puny and trivial” – and many want to embrace the Gita without having fully and carefully read it and understood the nature of the command of “nishkaama karma”.

Of course, there are also some, periodically, as they get out of their stupor of secular inebriation, who want to tear the book apart and burn it. According to the Guinness Book of World Records, the Bhagavad Gita could be among the best-selling books of all time, though unlike the Bible or Mao’s Red Book no church or state backing has been needed to lure readers to delve into contemplating the deep ocean of life, and the release from its burdens that the Gita offers.

There have been many translations of the Gita, since the time Charles Wilkins tried his hand and did the first direct translation into English in 1784, and many of those reading the Gita for the first time may have the kind of epiphany that might seduce them into thinking of translating it because they have found light and want to spread it.

But then they will have to read the numerous commentaries on the Gita, become familiar with the works of the great teekhacharyas’ works – the Gita bhaashyas, the Gita taatparyas – to be able to get a grasp of this tome that evidences the power and the influence of the perennial philosophy of India – Sanaatana Dharma.

The Gita has now become “fodder” for academic mills too, and there is some professor or the other, ensconced in a plush office in a fancy university in the West, or even in India, who wants to provoke the activist Hindu, or sow dismay in the devout saadhaka, calling the Gita a “book that promotes violence,” deliberately misrepresenting Krishna’s exhortation to Arjuna that as a Kshatriya on the battlefield, with his enemy ready to do battle, he cannot lay down arms and walk away, and that he has to do his “duty” as anyone in any other area of life, committed to a particular vocation, has to perform his or her duty to ensure that rta, the cosmic order, is maintained.

However, this is also the season for new translations and new readings and renewed interpretations of the Gita, for it is indeed, as Thoreau proclaimed, a source of “stupendous and cosmogonal philosophy”.

So, is there still room for another translation of the Gita, and what can one do or what would one do to offer something different and differently than what has not already been done and conveyed?

Here we have Jeffrey Armstrong/Kavindra Rishi offering us a “radical translation” of the Gita arguing that what many translators have offered are works that use English words that are not and cannot be synonyms/equivalent for many of the Sanskrit words – about 75 of them, from acharya and atma to bhakti and dharma, and from ananda and deva to maya and moksha, and from papa and punya to rishi and rupa and so on – and that the only way to read the Bhagavad Gita in translation is to retain the untranslatable Sanskrit words and offer a careful explanatory glossary for those untranslatable words.

Many have pointed out over the years, if not decades, that foreign translations of Indian works suffer seriously from both poor translations as well as deliberately mischievous or simplistic translations. These translations and the commentaries on the Sanskrit texts therefore have taken on a life of their own, and now constitute THE way to read and understand Indian texts.

“Let us teach you about what your folks have written, and let us tell you what they mean and meant,” became the modus operandi of the colonizer, and the ways and methods of the colonizer have become the ways of many of those who were colonized and “anglicized” and became deracinated enough that Indology has become a whole industry with constant churning of material seeking to anthropologize, demystify, deconstruct, and delimit the original, the traditional, the mystic, the transcendental, the lived, and the deeply felt.

As such, any attempt at recovering the mystery and the mysticism, the rigor and the depth, and remedying the harm done by both the innocent as well as the ideologically corrupted readers and translators is an occasion to cheer and applaud.

This beautifully produced book is a joy to hold and thumb through. Each verse of the Gita is first transliterated into English, followed by the translation, which retains the Sanskrit “untranslatables”.

The reader therefore is forced to pay attention to the Sanskrit words and concepts, check the glossary carefully, and begin to wrap his/her head around what is sought to be conveyed in the original. Armstrong is also a published poet, and so brings his way with words to translating the shlokas.

How readers will respond to his choice of words will depend on their command over the English language and their choice of the spare over the expansive, the quiet over the florid, or the emphatic versus the muted.

Another radical element in this translation is the insistence on the 5561 BCE date of the Mahabharata/Kurukshetra war. Thus, we have a foreword by Nilesh Nilakanth Oak, a vigorous proponent of that date, based on his careful reading of the astronomical references in the Mahabharata.

It is not clear, however, in the book as to why that date is necessary to understanding or revealing the depth of the meaning in the Gita, and except for a brief assertion in the “Introduction” that the Kurukshetra war “took place in India over 7500 years ago,” there is no attempt to explain to the reader the importance of the choice of the date.

I mention “choice,” because there are other scholars who take issue with Oak’s analyses, and who point out to conflicts and contradictions that arise when triangulating the astronomical data with other textual, historical, and archeological evidence. Therefore, a more careful explanation of the choice of the date would have helped the reader make a more assured sense of that historical marker.

The Bhagavad Gita has now seeped into popular culture, as evident from the popular film “The Legend of Bagger Vance”. Of course, reading the Wikipedia entry for the film would not get you anywhere close to a mention of the Gita but the Wikipedia entry on the book by Steven Pressfield on which the film is based does mention the connections to the “celestial song”. In fact, Steven Rosen’s book “Gita on the Green,” has a foreword by Pressfield.

A careful reader and a concerned human being would understand that most of these activists, academics, and actors are deluded and are still caught in the snares of “ahamkara.” They may do well to check the glossary in “The Bhagavad Gita Comes Alive,” and find out what Kavindra Rishi writes about ahamkara.