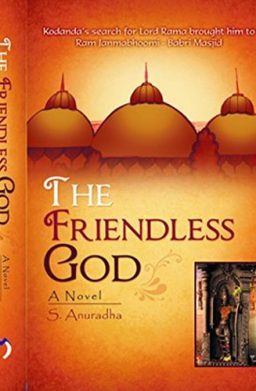 This is the tale of three people, a god, and the relationship the three have with Rama, their god. One seeks to find Rama, the other, having forsaken Rama, fights a losing battle with herself and her son to keep Rama out of their lives, while the third stumbles upon Rama as a way to a better life. Their lives intersect, diverge, and converge over the course of the story.

Vaidehi abandons singing and Rama after criticism of her Tamil-laced rendition of Tyagaraja kritis, and brings up her son Kodandarama, truncating his name to Kodanda, and stripping both his name and life of Rama. Kodanda – truncated from Kondanarama, Vaidehi’s son, grows up knowing nothing about Rama or god, but ends up searching for an answer to his question – why does Rama have no friends, despite being sought by millions. Then there is Raman, an orphan with the street-sense that takes him far.

The denouement of the book edges towards and culminates in the city of Rama’s birth, Ayodhya, on the fateful day of the 6th of December, 1992. Kodanda is drawn inexorably to Ayodhya by the events in the preceding months; first by the light of a lamp lit from Ayodhya and brought to his hometown , then a brick meant for the construction of the temple. Raman, on the other hand parts ways with Kodanda, seeking a life outside, and drifts from one place to the other till he meets a small-time politician, Dasharatha. Dasharatha struggles with political relevance till the Ramajanambhoomi movement breathes life into his ambitions. For him, Rama is a means to rajya, and Raman accompanies Dasharatha on this journey. Kodanda finds a way to Rama through music that his mother, Vaidehi, who tries desperately to strip it of all religious markers. He finds a way to Rama through apprenticeship with Ramimuddin, a painter of the thousands of years old craft of kalamkari.

Is Rama a friendless god? Why was he friendless, a question that troubles and haunts Kodanda. The answer to the question may be found in the reading of the book. What one leaves after reading the book is the feeling that Rama is not free even in the land of his birth, that his name and bondage has been used by politicians to further their careers. There are more subtexts that float at a subterranean level in the book, and which should prompt the reader to go back to the book from time to time to unravel the author’s intent and message.

The book itself is divided into short, crisp chapters of three to four pages each, which keeps the narrative flowing and the story moving forward. The style is easy on the eyes and mind, while doing a good job of conveying the emotions of each of the principal characters. The Friendless God is an interesting and recommended book to those wanting to read a different and thought-provoking perspective on the relationship people can have with Rama.