The Anarchy by William Darlymple – Part I 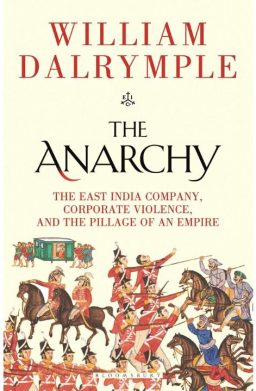 How do you read a Historical Account? That is a million-dollar question. This is an important question that we must ask. This is part of a larger question about the purpose of a historical account and History itself. This has been answered by the community that practices History. History helps us to learn from the past and make progress.

A significant part of the society has remained oblivious to such academic history. It is difficult to say if Europe has learned from the historical accounts of Hitler. In India, that is Bharat, we continue to learn more from Ramayana and Mahabharata, than anything in modern history.

Modern History resurrected King Ashoka from archaeology and texts. The Tradition had completely chosen to forget Ashoka. Yet, King Ashoka hardly inspires society as much as King Krishnadevaraya or King Samudragupta even today. One wonders if History has remained a self-perpetuating enterprise for a chosen few.

Yet, we cannot say that History has made no difference at all. In fact, it has made a significant difference to society in ways that we may not like. It has occupied a crucial space and time at school denying space for tradition narratives. As a result, we have a steadily deracinated and uprooted society. Nevertheless, we live in an era of History and we must deal with it.

In post-independent India, we are used to a pile of History books with enormous academic detail, foot-notes, claims, and criticisms. They have remained within the four walls of academic libraries. There was a community of History readers and writers within a clique. It made careers for people with very less positive differences in society.

However, this has steadfastly changed in the last few decades. We are now slowly filled with well-crafted and professionally Historical accounts that build a sense of the Past. There is a wide spectrum of such literature – starting from the high end of academics to honestly admitted historical fiction. The nature of the narrative and the audience targeted are different in this spectrum.

William Darlymple is one of the most popular history narrator kind of writer today in India. For a larger audience, the story-based narration style of history is easy to understand. Add to it the stronghold of Leftists on the publishing industry has meant that only those they deemed right have been made Gods and Historians in Indian Literature.

Darlymple saw an opportunity in India and grabbed it with both hands. In five decades of post-independent India, we had hardly produced any history book that could connect with the larger audience in spite of the fantastic storytelling tradition of India.

The ivory tower in which our modern history writers and academics live was such that he was able to find residency fairly easily. Starting with travelogues he moved on to full-fledged history writing. He has now assumed a larger-than-life proportion for a certain segment of society in India. His latest book is ‘The Anarchy’.

It is about East India Company (EIC) – a word that continues to generate negative emotion in our country 70+ years after they are gone. This book is about the journey of EIC starting from its formation as a trading company to its becoming ruler of the Great Indian Subcontinent.

How do we review such a book? This is part of the larger question – how do we read such a book? This question is critical. We knew how to read Ramayana and Mahabharata. Their place in society was clear. Their philosophical purpose was Purushartha. They were at once history and the metaphor. Tradition never bothered about the History as it was taken for granted.

It’s the metaphor that guided us. All ancient literature and medieval historical accounts even today are read from the perspective of metaphor. Given this civilizational concept it is how India will ever read any book. It is how we should read a modern Historical account as well, historically speaking.

Therein lies the danger of modern Historical accounts. They are simply weaving together evidence from disparate sources. It is the writer of History who makes the connection. It is, of course, not possible to be arbitrary in the making. There are obvious and unmistakable connections and there are far-fetched connections.

But, eventually, the Narrative is the King. In a great Narrative, the fine detail between the nature of these connections is completely dissolved. It is in the narrative that a historical account assumes a larger-than-life proportion and becomes the Metaphor. Therein lies the danger.

The Anarchy has the ambition of an Epic. It spans from 1599 to 1820. It covers so many characters that the author has thought it necessary to give a brief introduction to these characters in the beginning. It serves the book well. It is rich in incidents and events.

Things happen across the world. It is a dense book with a wide variety of pieces. One would think of the proverbial Jigsaw Puzzle and that is the danger. Is it really a puzzle that is being solved?

We could read the book as a portrayal of characters. Jagat Seth family is a strong presence in the book. They hardly speak in the book, yet their presence looms large in a significant portion of the book. One could fall in love with Shah Alam’s personality and evolution. We may be impressed by the astuteness of Alivardi Khan, so on and so forth.

You could deeply appreciate the humanitarian personality of Warren Hastings and his India appreciation. You could deeply sympathize with Mohammed Shah Rangeela in spite of all his inabilities. That amounts to be drowned in the beauty of the narration achieved by the author. Of course, historical evidence plays a role.

We could read the book as a sequence of situations. We can allow ourselves to be taken in by the role that chance plays in history. We can marvel at the daredevil nature of Robert Clive and his ability to take those chances. We can wonder how situations far away in the world have an impact elsewhere.

We can appreciate how some have the ability to see a larger picture and some do not. This amounts to reading the book like a novel. If a historical account can be read like a novel – that then is the success of the craftsmanship of the author.

You can read it like an absolute thriller. It is fascinating to read Clive’s journey from Fort St. George to save Fort St. Williams and eventually to defeat Siraj Ud Daulah at Plassey with a mere number of troops. You can wander at the late bravery of Shah Alam. You may be impressed that in that age the British had fantastic intelligence reports delivered from India to Britain, the records of which are still available. A thrill sells forever.

On the other hand, you could fly high and appreciate the bigger aspects of life. You can wander at the pragmatism demonstrated by the British at each level. You could be disgusted by the behavior of Bargis in the Maratha army for their conduct and think of the entire Maratha army in that way.

You could wonder at the respect that Mughal emperors drew from the region even in their dilapidated situations. It might strike you that the Industrial Revolution and the modern weapons were the reason why the British could negotiate themselves to a greater plane.

You could also be bewildered at the extreme strife in the regions that constantly called the British to be their negotiating partners which eventually catapulted them into the very rulership. There is no end to it. ‘The Anarchy’ has all of this and more. There is nothing wrong in these readings but we must not be limited to this.

In summary, we must read such historical accounts as a piece in the larger jigsaw. The book is not solving a puzzle yet, in spite of what the narrative chooses to achieve. It may be solving a small part of the puzzle but not the entire yet. This we achieve in the following way.

Through these, we must extend the scope of the puzzle for other narratives to plug themselves in to create a bigger narrative. Irrespective of who is writing a Historical narrative, we need this approach to not be caught in the web of History yet indulge in it for rightful purposes. However, for a Historical account like ‘The Anarchy’, this approach is all the more important.

Why does ‘The Anarchy’ deserve this treatment in particular

The ‘Anarchy’s is about the British East India Company. Its presence in India resulted in what we call in Sanskrit as ‘Yuga Pallata’. The word ‘era’ does not sufficiently capture the importance of what we call as Yuga. The Industrial Revolution combined with the Wealth zeal of East India Company resulted in making fundamental changes in every aspect of Indian Civilization.

We continue to experience the result of that change. We continue to seek a resolution of many aspects of our civilization in that period and beyond. It is a significant period, the understanding of which results in constructing a view of our Civilization in continuity starting from the Vedic times. Of course, it is not to claim that we shall bring Vedic Civilization into the critique of this account.

However, the picture that emerges from this account ought to be a complete one representing every aspect of India. It cannot be a selective picture, however well researched it is. The questions answered by the book are as important as the Questions not answered in the book.

We must ask questions that are fundamental and unimpeachable to the concerns of our Civilization. In that, we must dissolve the narratives of books that are well told, well researched but incomplete in spite of that.