Sutradhar: The Civilization A Stream of Consciousness by Ratul Chakraborty 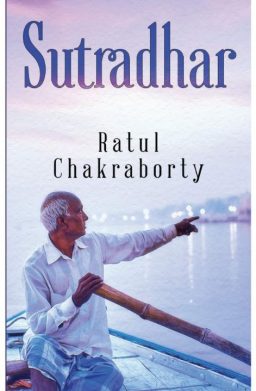 ‘Sutradhar’ by Ratul Chakraborty is a remarkable innovation. It is a collection of short stories but with a common thread. It is held together by a common concern of the Bharatiya Civilization, an interesting selection of situations from the past for stories shaped by intense artistic sensibilities of the author. In this combination, the book takes a very unique form.

The concern for Civilization and the Past has resulted in a unique choice of stories – each an intense moment in our History. Each is thought to have made a deep impact on the flow of the Civilization, resulting in a significant reshaping of the same. This review shall not dwell upon the details of those stories but the nature of the stories and the larger narrative that emerges from the book.

The collection is made of 7 stories. It starts with the River Saraswati, jumps to Chanakya, slides to Ashoka, leaps to Aurangzeb’s encounter with the Deccan and then flows gradually down in the Gangetic plans covering 3 stories one from immediate future after Battle of Buxar, one set in the times of Bengal Partition at Kashi and finally the most important event in the history of 20th Century – the India-Pakistan Partition. The importance of these moments is self-explanatory and needs no elaboration. It is the author’s treatment of these stories that deserve a mention.

The unique innovation in the book is the author’s marrying of a very modern language and expression, with influences from all these traditions and practices – irrespective of whether it is consciously done or not. That provides the reader with very magical reading experience. Stories flow constantly from the plane of the real to the magical and back, in an interesting blend, that makes the reader open up for the heavy substance throughout the book.

The collection of short stories is remarkable in a different way. It is told from particular moments, angles, and characters in the respective story that are not in the mainstream narration of history or it is entirely the creative imagination of the author. The story of River Saraswati is entirely an imagination and recreation of what may have happened, given the enormity of the river for the Civilization, narrated in the strict tradition of the Magic Realism.

A Divine river, its drying up could have only been divine intervention. The story of Chanakya represents the evolution of strategies, laws, and concerns required for the modern era but according to the Dharma – even if Saraswati has dried up. It has assumed a greater realism in its narration that the substance commands.

The story of Ashoka is his own mind speaking to himself through other characters – a sensitive stocktaking of his success and failure, in lyrical flow. Aurangzeb’s story assumes a very grand narration with a fascinating combination of different expressions and imageries. It depicts the ambition, cruelty, the disaster, and the fruitlessness through a fine-set of characters.

My personal favorite is the fifth story, where the disasters that struck Bengal in the immediate aftermath of British capture is depicted in a greatly metaphorical manner. It depicts the inner decadence of the society and a cohesive realization of the same through the genius of the society within. The ghosts that tend to haunt us – it is we who need to let them go, a criticism of the society brilliantly depicted through characters and their metaphoric play between themselves.

The sixth story is set in Kashi, in the vicinity of Bengal Partition, and the flow of all streams leading a greater awakening that eventually led to the political freedom of Bharatavarsha. Finally, the seventh story – set in Lahore during the partition times depicts the tragedy of a Hindu caught in the exchange and the civilizational force that invokes the right spirit in him in the form of an ascetic. It’s a treatise on what should be the way forward for our Civilization.

It’s a remarkably ambitious book. It has imagery and metaphors in 7 short stories that truly belong to a lengthy classic. The ornaan mentation of lyricism, poetry, metaphors is almost at the level of etching one finds in the Hoysala Temples – rich, striking, and overwhelming. It is a work of amazing labor and love, grand in its tone. One does feel that stories from the classical era are missing, but then the book was not meant to be a chronological representation of the historical points, rather as a collection of independent stories with a common concern.

Nevertheless, in 7 stories it attempts to cover the concerns of a classic. A single novel could have never covered the entire history, but a collection of short stories at various points could still capture the essence. The intensity of those moments is good enough to present a collection of Hindu thought – Devas, Dharma, the perspective of a King and Law, Matsya Nyaya, the importance of Kshaatra, and so on. Just as the Kuru-war becomes a great opportunity to present the entire Sanatana Dharma in the most complete and intense way.

The book indirectly brings forth the question of the presence of the narrator and the extent of narration as required by the substance and expression forms. In spite of them being assorted short-stories, the common civilizational concern leads to the book being read like a single body. The narration then should manage this expectation. But that is an aside.

There are great moments in every story – invariably the beginning and the end are emphatic and glorious. The Bengal story is a real classic with an exceptional interplay between metaphors working perfectly towards the concern of the author. The book in itself is a collection of different literary instruments and innovations – quite remarkable for a first-time author.

We may have an assorted collection of beautiful flowers but when making a garland we only choose some and position them in the right gap and number so that the complete garland is beautiful. The composition of lyricism, metaphors, pace, and narration has to achieve the same for a book.

In some ways, the book belongs to the form of ‘Champoo’ writing found in the classical era and thereafter, until the British era. It is quite unique to Bharatamandala – an alternative of poetry and prose. The book achieves this form in a very modern way with poetry, lyrical prose, and normal prose. This blends very well with realistic, magic realism, and other narrative forms – which together creates an overwhelming experience for the reader.

The challenge is to achieve a fine composition between the two so that it works for the book. The textual forms of the characters and that of the narration must distinguish between themselves as well, in this composition. All this, of course, is a finer nuance.

The summary is we have a book with enormous literary innovation, imagination married to a fantastic civilization narrative. Shri. Ratul is a writer – an intellectual writer as well as a creative writer. He has definitely arrived with a bang – with a concern, sensitivity, and perspective. The author’s concern and sensitivity flow like a stream of consciousness throughout the book and falls like a great Waterfall in the final story into the minds of the readers, to reflect upon the post-independence era, in a lyrical form with poetic imagery.

We have to flow with it into the future.

Interview with author Ratul Chakraborty who shares his insights on his book Sutradhar.

Sutradhar is available for purchase from Amazon.