Review of Who Killed Shastri by Vivek Agnihotri: The Making of a Movie, Conspiracy, and a Nation 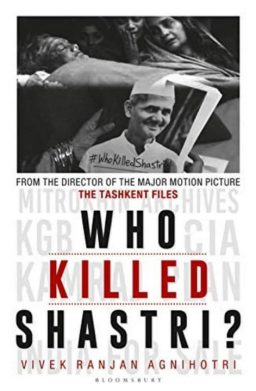 Lal Bahadur Shastri, India’s second prime minister, died in Tashkent in the early hours of the 11th of January, 1966. This was shortly after he signed a peace accord between India and Pakistan, brokered by the Soviet Union. He was cremated in his hometown after his body was brought back to India.

In case people are wondering, another prime minister from the Congress party, not from the Nehru dynasty, was denied a funeral in the national capital.

Regarding Shastri’s death, these are the only incontrovertible facts that people agree upon. Why is that? Because Indians, like everyone else, love a good conspiracy theory.

Because conspiracy theories behind his death have been used to point fingers at the alleged role of foreign powers and the complicity of certain politicians and political families on the other.

Because no one disputed the circumstances of his death till several years later when it was politically expedient to do so.

Thus goes one line of argumentation.

Oh, by the way, no autopsy was conducted on Shastri’s body. This despite the fact that the Indian prime minister had died in a foreign country, not long after the nation had fought a war with its neighbor.

Despite the fact that the late Prime Minister’s wife, Smt. Lalita Shastri had asked for an autopsy, stating she believed that her husband had been murdered.

No commission of inquiry was held to probe into the circumstances of his death to quash any such conspiracy theories. No documents are available with the Government of India about his death. No records exist with Parliament.

Shastri was a vegetarian. His last meal was prepared not by his personal cook, but by Jan Mohammed, who had been Maulana Abul Kalam Azad’s cook and that ‘he was posted as T.N. Kaul’s cook in Moscow’.

Who was T.N. Kaul? He was India’s ambassador to the Soviet Union at the time? In Kuldip Nayyar’s words, in an interview he gave to the author, Kaul called him several times, asking him to put out a statement that would clear his name.

This sowed the seeds of doubt in Nayyar’s mind that perhaps there was more it than met the eye. Or that Kaul refused to allow anyone to come near Shastri’s body, or his insistence that Nayyar gives a statement that Shastri had died of a heart attack. Kaul was later appointed ambassador to the United States by Mrs. Indira Gandhi.

Before the prime minister’s visit to Tashkent, a DIG (Deputy Inspector General) had flown from India and approved the arrangements for Shastri’s stay in the tourist home, that had a provision for an operation theater ‘with oxygen and other fittings’.

‘But two days after his approval, ‘a particular gentleman’ from Moscow … a very big person … intervened’ and the location where Shastri was to stay changed. The Indira Gandhi-led government provided no response or information on who this person was.

Nor is the logbook that holds a record of the prime minister’s pulse, blood pressure, and other health indicators, and which is the government’s property, available. It is simply missing.

We must also ignore as unreliable and exaggerated the accounts of Robert Crowley, a CIA Clandestine Operations Division operative. Crowley spent his entire career with the Directorate of Plans, also known as the ‘Department of Dirty Tricks’.

The recordings of the conversations Crowley had with Gregory Douglas, a journalist, are also of no value, particularly when Crowley tells Douglas that ‘We nailed Shastri as well’, or that Homi Bhabha was warned several times by the Americans to stop India’s nuclear bomb project.

It should also be dismissed as a pure coincidence that just two weeks after Shastri’s death, Homi Bhabha died when Air India Flight 101, ‘Kanchenjunga’, on which he was traveling, crashed in the Alps, ostensibly due to a ‘pilot error’. Never mind that Crowley told Douglas that ‘his 707 had a bomb go off in the cargo hold… No real evidence and the world was much safer.’

Assassinations, or deaths under unnatural circumstances, are nothing new to either India or other countries. Just between 2009-2013, ‘as per the data furnished by the Department of Atomic Energy (DAE) in its response to an RTI query, … Eleven nuclear scientists in India have died under unnatural circumstances.’ It has elicited neither alarm nor an inquiry from successive governments.

A few years later, on the 30th of December 1971, Vikram Sarabhai, commonly referred to as the father of India’s space program and also the founding Chairman of the Indian Space Research Organization was found dead in a hotel room at the Halcyon Castle in Kovalam. Like Shastri, his cremation was performed without an autopsy.

Vivek’s book follows the first-person point of view, with the author interlacing the narrative with the background of the movie; how the idea was seeded, what the research led to, how skepticism faded, and the imagining of the ending, the climax.

After all, we still don’t know who killed Shastri. Whether his own ill-health, the trying circumstances of the times, poor judgment on the part of the medical staff present at the time, or a conspiracy, we are still struggling for answers and closure.

The movie released in April 2019. Since these were pre-Covid times, it saw a theatrical release but had to make do with a small release footprint of 250 screens, as opposed to more than a thousand screens that a typical, mainstream Bollywood release sees.

In addition, it ran up against such movies as Karan Johar’s ‘Kalank’, ‘Avengers: Endgame’, and then the much-hyped ‘Student of the Year 2’.

It held its own, increased the number of screens it played at, and ended up as an unqualified commercial success, much to the dismay of those who had written off Vivek’s movie even before its release and one critic who had wished he could give the movie zero stars, without having seen the movie.

I would be remiss if I did not finish with one last factoid. Two pieces, in fact, about two persons.

Eleven years after Shastri’s death, in 1977, with a non-Congress party in power for the first time since Independence, Dr. R.N. Chugh, Shastri’s personal physician who accompanied the Prime Minister to Tahshkent and was present in the villa where he died, was summoned by a parliamentary body.

On his way to parliament, in the heart of the national capital, the car in which he was traveling was hit by a truck. Only one person, a child, survived. Dr. R.N. Chugh died in that ‘accident’.

The second witness called to depose was Ram Nath, Shastri’s personal servant, and present in the villa when Shastri died. He first visited 1, Motilal Nehru Marg, where Shastri’s widow lived.

As he exited the bungalow, he was run over by a government bus. His legs were amputated, he went into a coma, lost his memory, and died a few months later.

All perfectly normal coincidences, all explainable as random occurrences. Nothing to investigate, nothing to question, nothing to fret over.

As for the book, it is a breezy, well-informed read, and keeps you turning the pages. It may also make you question the mainstream narrative that has been built over Shastri’s death.

Do read this one. It gives you a ringside view into the making of a movie, the contours of a conspiracy that has remained hidden, and the making of a nation that cares little for either facts or its future.

Who Killed Shastri?: The Tashkent Files is available for purchase on Amazon.