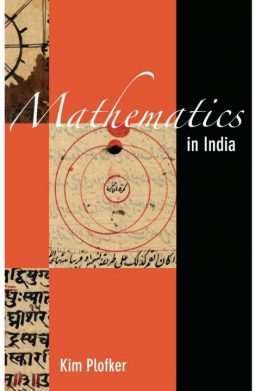 How far had Indians developed Maths in ancient times? What was the extent of their original work? How much was influenced by others? What was the overall structure of maths then? Was it treated as a separate subject in its own right or was it considered mainly as a tool, in performing rituals? Were we stubborn or flexible in welcoming the flow of knowledge from Western cultures? And finally, what was the exact time frame of all those discoveries?

These and similar questions preoccupy us when we focus on scientific and technological developments in ancient and medieval India. Of course, the claims are many, but some of them are not convincingly proved, so far.

For some reason, scholars and researchers around the globe have shown a keen interest in the age-old science and maths that was prevalent in India. One such erudite personality is Kim Plofker, who did her research in mathematics from Haverford College, under David Pingree, a reputed historian of mathematics. Plofker received her PhD in 1995.

“Mathematical Approximation by Transformation of Sine Functions in Medieval Sanskrit Astronomical Texts” was her treatise. This research motivated her to write a complete book, Mathematics in India, which has received quite a name and fame in the circle of fastidious readers. Truly speaking, even a proud Indian finds many difficulties in unearthing the knowledge that has remained hidden in the old treatises. As the author observes:

Unfortunately, owing mostly to various difficulties in working with the sources, the broader history of Indian mathematics linking those episodes still remains inaccessible to most readers. This book attempts to address that lack.

The decimal number system and the concept of zero is, undoubtedly, our contribution to the entire world, but does the glorious story end here? The answer is an emphatic No. From numbers to their various operations, two and three-dimensional geometry, the idea of pi, trigonometry, the concept of binary numbers, indeterminate equations, progressions, and finally calculus.

Before the Europeans could invade, we had done some remarkable and original work in mathematics. A detailed, but not verbose, account of all this can be found in ‘History of Mathematics’.

A glance at the names of the various chapters included in the book will help us understand whether or not the Plofker has tried to address those issues:

Besides, the author has written an introduction of about 13 pages at the beginning. More praiseworthy are the appendixes, added at the end. The second appendix gives the Biographical Data of Indian Mathematicians, while the first one deals with the Basic Features of Sanskrit Language and Literature, which is a unique feature of the book.

Deciding the exact time when the Vedas and the related or allied texts were created is one of the crucial factors in the search of ancient/medieval mathematics in India. In fact, there is a tug of war between two wings in Indian society. While one of these enjoys pushing it far beyond, the other insist on pulling it towards the current time.

It is now clear that illustrious personalities like Aryabhata (I and II), Brahmaguapta, Bhaskaracharya (I and II), Neelkantha, Mahaveera, Lalla and Madhava were all born and lived from 500 CE to 1500 CE, but the exact time of the Vedas is still uncertain. Western scholars have decided this time as not before the 4th millennium BCE. Many Indian scholars have claimed that the creation of the Vedas must have been prior to this.

Plofker has mainly resorted to the typical modern (and Western) approach in this case. Of course, to substantiate her claim, she has taken into consideration various aspects, like the style of the language, etc. She says:

The whole framework of the history of Sanskrit mathematical science ultimately hinges on the question of when and how these texts were composed, and it is a question that still has no universally accepted answer. The discussion in this book for the most part hews to the standard or conservative scholarly consensus about the basic chronology of Indian history and science.

In Vedic literature, there are numerous references to different numbers. In fact, the manner in which these appear suggests that we had already developed the decimal system. The author has considered various such verses and has tried to show that Indians did have a complete idea of the decimal system, since Vedic times. For example:

You, radiant [Agni, the fire-god], are the lord of all [offerings]; you are the distributor of thousands, hundreds, tens [of good things]. (Rig-Veda 2.1.8)

The mention of fractional numbers (in the Vedas) reinforces the author’s claim. It should not now create any problem in accepting that the basic idea about the numbers and the various basic operations on them was known to Indians, for ages.

However, one question remains. Did we really treat Mathematics as a separate subject or did it always remain just a tool, for astronomy/astrology and ritual practices? It is an established fact that the Vedic literature does talk about the various rituals/sacrifices to be performed.

For performing these, it was mandatory that the typical structures (for example, altar) that were used to get created should be of a particular size, area, shape, etc. The standard text for all the calculations required was Shulba-sutra. Although the various geometrical methods, explained in Shulba-sutra are worth considering, the maths (or logic) behind all these is hardly explained. The Shulba-sutra directly gives methods to perform, and not to forget that the ultimate goal of all these was to attain specific rituals.

The texts created by Aryabhata and others (from the 5th century CE onwards) do not seem to a have strong connection with rituals. But most of them contain extensive information about astronomy. Hardly any of these contain pure Mathematics. Plofker has pointed out this fact and raised this doubt.

At times, one feels that these texts were mainly handbooks, giving only a list of the various results. The absence of detailed proofs and the mention of only the final results creates a doubt about the credibility of Indian mathematicians of the bygone era. However, the author has a different approach here. She affirms:

Mathematics, not being an epistemologically privileged discipline in Sanskrit learning, was generally subject to the same truth criteria as other forms of knowledge. In Sanskrit epistemology, valid ways of knowing to include direct perception, inference, analogy, and authoritative testimony. This means that the idea of mathematical proof is somewhat different from the formal chains of explicit deduction mandated in Greek geometry.

Mathematical assertions in Sanskrit can be justified in a number of different ways according to philosophical truth criteria, and sometimes they are not explicitly justified at all. This is not to say that rigorous demonstration and formal logic were unknown to Indian mathematicians, nor that Indian mathematicians generally permitted arguments from authority to overrule demonstration.

But there was no conventional structure of proof consistently invoked as essential to the validation of mathematical statements. True perception, reasoning, and authority were expected to harmonize with one another, and each had a part in supporting the truth of mathematics.

A similar approach can be seen while discussing the exchanges with the Islamic world. While a few scholars have made a few harsh or disdainful remarks on the Indian texts, the author has tried to exonerate Indian mathematicians and has commented that the reason lies in the difference between the cultures and their styles.

The chapter on ‘Exchanges with the Islamic World’, in which she has dealt with this question, also focuses on the fact that we were not stubborn in accepting the knowledge from other sources and cultures.

Was “Indian” mathematics over by the 17th seventeenth century? It is true that after the beginning of the 17th century, the Europeans took a much longer leap in the field of science, mathematics, and technology. As an impact of this, we mainly hear about the works and names of Europeans only in this era.

This creates a feeling in our minds that Indians just forgot that they too should contribute something. However, the author Kim Plofker has refuted this belief in her last chapter, ‘Continuity and Changes in the Modern Period’.

In a nutshell, to get a detailed account of the vast mathematical knowledge that our ancestors had, to get a brief idea of what they thought about astronomy, to get to know the style of their writing, to understand the various ideas, they came up with, for concise writing and finally to learn about their ‘give and take’ with the Western world, the book ‘Mathematics in India’ is a must-read for all.

Mathematics in India is available for purchase from  Amazon.