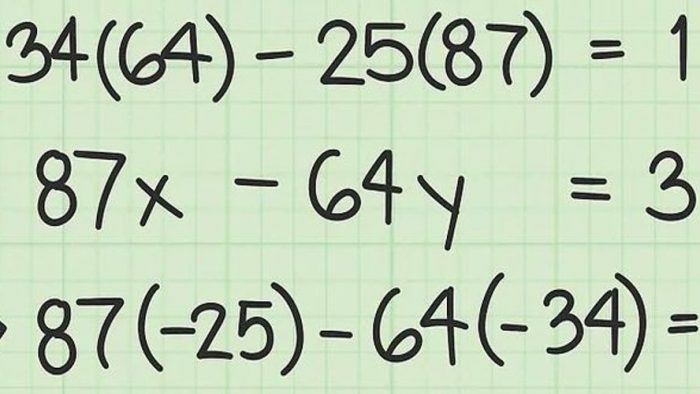 Ancient Indian Mathematical Treasure is a new series of articles by Salil Sawarkar, introducing the rich mathematical heritage of our country. This is the fifth article in the series. Read the first five articles here, here, here and here and here.

Since, we have been going through the advancement of Indians in Algebra, and these are numerous, it won’t be a bad idea to go a little further. Let us consider a practical situation. Suppose you have gone to a store (following the restrictions of lockdown, of course!) for purchasing a pack of biscuits. Suppose you have more than enough money but it consists of only five rupee coins. The shopkeeper too has sufficient money but it consists of only two rupee coins. If the pack costs twenty rupees, then you can produce four coins (each of five rupees). If the pack costs any other multiple of five, still it can be easily purchased by producing the required number of coins. But suppose the pack costs eighteen rupees. What would you do? Not so difficult. You can give four coins (that is, twenty rupees) and the shopkeeper will return one coin of two rupees. What if the pack costs twenty two rupees? It’s still not difficult, for you can pay him thirty rupees (six coins, each of five rupees), and he will return eight rupees by returning four coins, each of two rupees. So we seem to be solving the problem, in every case. Note that our solutions are not the explicit solutions. For example, 22 = 5 × 6 – 2 × 4, but then it’s also true that 22 = 5 × 8 – 2 × 9. Similarly, 22 = 5 × 10 – 2 × 14 and so on! The same is true with 18, also.

What we are doing can be written algebraically as r = ax + by, where r, a, b, are known but x and y are unknown. Now in general, for any x, the value of y can be found out. However, if we restrict x and y to be integers only, then solving such an equation becomes a difficult task. Such equations are known as Diophantine equations, as the Greek mathematician Diophantus had studied them. However, Indians were quite aware of such equations. They used to call these कुट्टक (kuttaka). We find methods of solving these in our old treatises. It won’t be out of place to make a comment that such an equation may not be solvable at all. In our example, suppose you have ten rupee coins and the shop owner has five rupee coins and if the pack costs 22 rupees, then, no matter how many different combinations you consider, you cannot pay exact 22 rupees. Give it a try!

Two other words कुट्ट (kutta) and कुट्टकार (kuttakaara) have also been used by our ancestors. It may be noted that these equations are also called as Indeterminate Equations, for they don’t have a unique solution. We have seen that such an equation may have more solutions or no solution, at all. For these reasons, these are termed Indeterminate Equations. Actually Indians considered three different types of problems. The three basic types of problems were: (1) To find a number, which after divided by two given number leaves the given remainders. (2) To find a number, which after multiplied by a given number and then to this product a given number is added, becomes perfectly divisible by a third given number. (3) The third type is what we have seen above, that is, r = ax + by, where r, a, b, are known. Of course, the method to solve these equations is too large and the कुट्टक (kuttaka) is itself a separate subject of several articles. So, we won’t delve much here. Instead, we will just keep a note that such equations were tried successfully by Indians. For the time being, we will divert our attention to something which is comparatively easier.

In the treatise ब्राह्मस्फुटसिद्धान्त (Braahmasphutsiddhanta), the mathematician ब्रह्मगुप्त (Brahmagupta) has very lucidly explained the methods of solving linear equations in one unknown, simultaneous equations in two unknowns, quadratic equations and indeterminate equations. It may be noted that the ब्राह्मस्फुटसिद्धान्त (Braahmasphutsiddhanta) deals mainly with astronomy, and mathematics appears as a tool to solve the problems in astronomy. For the equations of the type, ax + c = bx + d, where a, b, c, d are known, Brahmagupta says,

This means, in a linear equation with one unknown, the difference of the known terms taken in the reverse order, divided by the difference of the coefficients of the unknown gives the value of the unknown. Thus, in the equation ax + c = bx + d, we get, x=(d-c)/(b-a). The reader must have seen the equation ax + c = d, for which we get x=(d-c)/a . It can be seen that it is just a particular case of the above equation, with b = 0.

Having explained the method to solve linear equation with one unknown, Brahmagupta considers a particular set of simultaneous equations and explains the method to solve them. He has considered the equations of the type: x + y = a and x – y = b, to which he calls सङ्क्रमण (sankramana). The reader might recall that the best way to solve these two is to add the two equations initially and then take the difference of the two equations. Brahmagupta depicts the same in the following verse:

As remarked above, the treatise Braahmasphutsiddhanta mainly deals with astronomy and therefore, at number of places, we find that Brahmagupta considers the problems from the field of astronomy. For these types of equations, the problem considered is as follows:

In fact, here Brahmagupta asks a question in the first line and supplies the answer in the second. He is asking the exact amounts of residues (a typical term in astronomy) of two heavenly bodies, when the sum and difference of the residues of the two are known. As an answer, he repeats his method, described above.

In mathematics, a particular set of equations is known as Pell’s equation, which can be stated as, Nx2 + 1 = y2, where N is known, but x and y are unknown. Again, in general, for a given x, one can find y, but if we restrict x and y to be integers, then finding the solutions for this is rather difficult. From the name of the equation, one may feel that it was mathematician Pell, who solved the same first. John Pell was no doubt a great mathematician of the seventeenth century, but Brahmagupta had solved such equations, around 1000 years before him. He has called these equations वर्गप्रकृति (vargaprakruti). As in the case of r = ax + by, this too may have several solutions. Basically, Brahmagupta gives a method of obtaining several solutions from one! For this, we have his theorem, which states that if a1, b1 and a2, b2 are solutions of such a वर्गप्रकृति (vargaprakruti), then a1b2 ± a2b1 and b1b2 ± Na1a2 are also solutions of the same. So, the moment we have two solutions, we can find many more, using the two. In fact, even if we have only one solution, we can still find many more by treating the same solution as the second solution. For example, if one starts with 8x2 + 1 = y2, then one observes that x = 1 and y = 3 is a possible solution. So let a1= 1, b1 = 3 and a2 = 1, b2 = 3. This will lead to x = 6, y = 17. (You can check that 62 × 8 + 1 = 289 = 172) From these we can obtain x = 35 and y = 99 (352 × 8 + 1 = 9801 = 992) and so on! So, a little guess work (or trial and error) initially and you start getting millions and millions of solutions.

Bhaskaracharya too worked on problems of वर्गप्रकृति (vargaprakruti) of Brahmagupta, but his method was different. He called it चक्रवालपद्धति (chakravaala paddhati). In Brahmagupta’s method, one has to start with a set of known solutions, which were outcomes of ‘trial and error’ methods. But Bhaskaracharya went ahead in his चक्रवालपद्धति (chakravaala paddhati) and removed the pains of guessing the initial solution.

As time marches on, the world progresses. This progress continues forever, because the next generation is always standing on the shoulders of its ancestors. Thus, the latter scholars are able to see far beyond than the former ones, and they feel indebted, if they are humble! Bhaskaracharya has exhibited both these qualities. He salutes his ancestors, at times, and continues developing the mathematics of his time. So far, we have seen equations of the first and second degree, but in his बीजगणित (Beejaganita), Bhaskaracharya attempted to solve fourth degree equations too. In one of the problems, he asks to find the unknown, say x, such that x4 – 2x2 – 400x = 9999. Solving such an equation is not so easy, but Bhaskaracharya adds 4x2 + 400x + 1 to both sides of the equation and then a bit of manipulation gives him x = 11. The reader can verify that the answer is correct.

It is quite natural for an Indian to feel proud about the advancements of his ancestors, but when we find that even the foreigners did the same, we feel really overwhelmed! “The learned Brahmins of Hindustan are the real inventors of Algebra”, was remarked by none other than the German Mathematician Hankel! (Those who don’t like the word Brahmin may read it as Scholars!) Scholars like James Q. Jacobs and David Ewing Duncan have praised Aryabhata and his Aryabhateeya. In the book, named History of Mathematics, the author Carl Boyer has praised Bhaskaracharya for his solutions to a particular वर्गप्रकृति (vargaprakruti) 61x2 + 1 = y2. Bhaskaracharya got extremely high values, like x = 226153980 and y = 1766319049, as its solutions! Isn’t it astonishing? How could he come up with such ultra large solutions when he didn’t have any machines to aid calculations? Boyer has aptly said that, “the verification of these alone will tax the efforts of the reader!!”