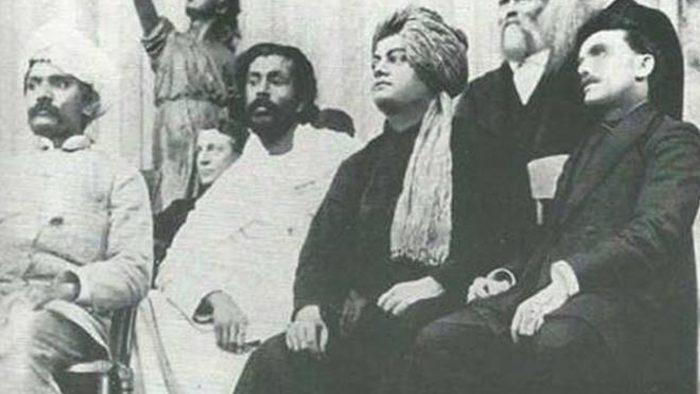 The maiden Parliament of the World’s Religions, conducted in Chicago between September 11 and 16, 1893, was an august gathering of prominent luminaries across faiths. While Vivekananda’s historic speech here opened new vistas for the globalization of Hinduism, it is pertinent to note that this gathering was expected to reclaim the supremacy of rich and Christian nations. As Swamiji mentioned it in an interview,

The Parliament of Religions, as it seems to me, was intended as a heathen show before the world; but it turned out that the heathens had the upper hand…So the Parliament was a failure from the Christian standpoint…But it was a tremendous success for India and Indian thought.[1]

Swami Vivekananda’s prophesy has indeed come true as exactly 127 years ago, On September 11, 1893, his iconic address opened a new era for the worldwide reception of ancient Indian wisdom in general and Hinduism in particular.

After a passage of time, Vivekananda’s revolutionary words are still reverberating as we can see a growing interest of scholars, academicians, spiritual masters, and people in general in understanding the implications of Swamiji’s Chicago speeches.

On the anniversary of these legendary addresses, let’s have a sneak-peek into its historicity and relevance from Swamiji’s own standpoint.

Chicago addresses and the making of Hinduism

It is essential to understand the context in which Swamiji spoke.  American and European understanding of India was limited rather misconstrued.  India was projected as a country neck deep in poverty so much that Vivekananda was asked that if Indian mothers threw their baby girls to crocodiles.

After returning from America, in a reply to Hindus of Madras, Swamiji clarified his stand against Christian missionaries and also gives a glimpse into how they projected India before the world to raise funds,

… I protest against certain of their (missionaries’) methods of raising money in America. What is meant by those pictures in the school-books for children where the Hindu mother is painted as throwing her children to the crocodiles in the Ganga…is meant by the pictures of huge cars crushing over human beings…..I have heard one of these gentlemen preach in Memphis that in every village of India there is a pond full of the bones of little babies. [2]

Even after Vivekananda’s success in the Parliaments, a lot was rumored against Swamiji.  In his letter, Swamiji hints that supremacy of Hinduism didn’t go down so well. Dr John Henry Barrows, a leading figure in organising Parliament of World’s Religions shared love hate relationship with Swamiji in spite of being his good friend.

Swamiji in his letters, categorically mentioned to welcome Dr Barrows to India, [3] Dr Barrows never reciprocated the same when Swamiji returned to India after his first visit to the West. Life of Swami Vivekananda by His Eastern and Western Disciples chronicles this incident. [4] He also accused Swamiji for being liar but Swamiji read it right that his mission to India failed because he taught ‘bigoted Christianity. [5]

Swamiji has explicitly mentioned how supremacy of Hinduism rather ‘hurt’ Dr Barrows. ‘You have also heard, quite within recent times, the claims put forward by Dr. Barrows, a great friend of mine, that Christianity is the only universal religion…[6]’, said Swamiji in one of his lectures.

The philosophical conquering of Hinduism was the bone of contention to orthodox missionaries. As swami wrote in a letter, ‘The Parliament of Religions was organised with the intention of proving the superiority of the Christian religion over other forms of faith, but the philosophic religion of Hinduism was able to maintain its position notwithstanding.’ [7]

While sending missionaries to India has been a regular practice for Europe and America, an Indian monk , in an orange robe with native command over the Queen’s Language, did come as a shocker to the conservative Christians. Swamiji, calling Hinduism as a ‘mother of religions’, could have come as a surprise to them.  Like Nivedita notes in her introduction to Complete Works of Swami Vivekananda,

Of the Swami’s address before the Parliament of Religions, it may be said that when he began to speak it was of “the religious ideas of the Hindus”, but when he ended, Hinduism had been created.

Presence in the contemporary media

Though Vivekananda was unsparing about his attack about hypocrisy and bigotry, be it in India or west, he was open-minded about noting how liberals in USA and Europe understood basic tenants of Vedanta and Hinduism.

It is not just that European or American newspapers had taken the cognizance of Swamiji but back home, many Indian newspapers and journals too had reported about Swamiji’s glory at the Parliament.

That’s the reason Swami Vivekananda received a grand reception in India and was invited to many places to lecture. His lecture series, ‘Lectures from Colombo to Almora’ is a wonderful chronicle of his addresses in India.

This series has been a catalytic agent in arousing Vedantic spirit in his fellow countrymen. Dr. Sankari Prasad Basu, a veteran Indian scholar has presented a detailed account of Swamiji in Indian media in his well-researched book, ‘Swami Vivekananda In Contemporary Indian News’ published by Ramakrishna Mission Institute of Culture Golpark.

Preaching Vedanta in the Indian spirit

Why Chicago speeches turned out to be a milestone in Swamiji’s journey to the West? Scriptural hermeneutics of Vivekananda, interpreting texts in the original sense and with the Indian spirit deserves a categorical mention. Swamiji’s pioneering attempt to keep the originality of Indian texts could have been an antidote to the westernization of Hinduism.

Chicago speeches were a benediction to it.  While Swamiji’s letters, biographies and reminisces have given enough detailing into Swamiji’s struggle till the Chicago addresses, Swamiji’s ability to speak the truth in spite of the adversities remains unmatched. The philosophical and religious exchange between India and Europe may date back longer.

‘I think Schopenhauer’s philosophy makes a mistake in its interpretation of Vedanta, for it seeks to make the will everything. Schopenhauer makes the will stand in the place of the Absolute….’ [9]

Swamiji also had candid interactions with another famous figure Max Muller, who had written on Life of Sri Ramakrishna in English and also another Indologist Paul Deussen. Swamiji’s interpretation of Hinduism had a wider appeal because he interpreted it in the original sense.

Swamiji had also warned that Indian texts must be preached ‘according to our sages and not according to orientalists or so-called European Scholars’. In a typical western sense, a newspaper reporter in Europe asked Swamiji and if what he preached was the form of comparative religion, Swamiji gave an apt reply,

“It might convey a more definite idea to call it the kernel of all forms of religion, stripping from them the non-essential, and laying stress on that which is the real basis…You know that the Hindu religion never persecutes. It is the land where all sects may live in peace and amity…. India sets the example of real strength that is meekness. [10]

Swamiji presented the entire rubric of Hinduism at the Parliament. All in all, he delivered six short addresses that have not only left an indelible mark in the world but have emphasised on harmony of all religions.  If Parliament of World Religions is seen as the maiden attempt to organise an interfaith dialogue, Swamiji must be called the forerunner in what is called ‘religious pluralism’. [11]

A scholar observes, ‘Swamiji believed in intra-religious as well as inter-religious pluralism;…his employment of the category of Vedanta is completely different from what has been perceived as his ‘privileging’ of Vedanta, therefore it is not an impediment to his pluralism. Vedanta is not one of the competing ‘religions’. [12]

His response to the Welcome portrayed the idea of Vedanta. In his second address, the Upanishadic concept of  Kupamanduka, a frog in well story that he told, set the tone for religious pluralism. Here he, launched a candid attack on Christian missionaries in his address ‘Religion not a Crying need for India’. In the next address, he called Buddhism as a fulfilment of Hinduism.

Vivekananda’s presentation of Hinduism in Chicago addresses is not merely persuasive or convincing rhetoric but it is rather compelling content.  Swamiji’s immanent articulation could be stemming from the tremendous clarity he had about the religiosity.

The impact Swamiji created through his presentation of Hinduism needs to be comprehended in the original sense of Indian spirit which emphasizes on experiential learning.

Thus, Swamiji’s Chicago addresses and mission in the West could have been not only the facilitator of Indo-West cultural exchange but also rolled a red carpet for India’s soft power, yoga, and spirituality.