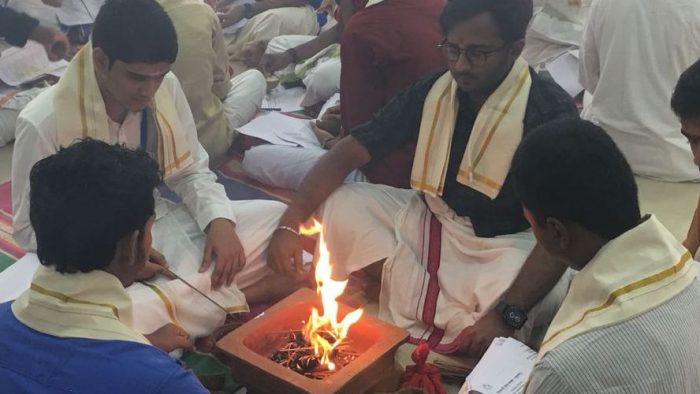 The lush green woods of Kerala are indeed there on either side of the road I am driving on, though with an endless chain of shops in the foreground. And then there are the numerous churches that look like bakers’ entries in a competition for the most ornamental wedding cake. I am on my way to Chinmaya Vishwavidyapeeth (CVV) in Veliyanad about 50kM from Kochi airport. I am to attend the commencement ceremony on July 27, 2018, the Guru Purnima day.

I am at 76, a near alien to my Hindu inheritance, now eager to rediscover what I had misplaced. For a decade now I have been nursing my loss without quite knowing how I might retrace my steps. I have taken to simply trusting my passion and longing. Thus it was that I allowed myself to be persuaded by my friend Hari Kiran Vadlamani to join him for the event.

He is committed to an Indic Renaissance and has an eye for opportunities to support and promote causes and institutions that’d fitted his mission. I am a member of an online community called the Indic Academy that he has founded. He has been supporting two students at CVV. He was to deliver the keynote address as the new term begins on Guru Purnima day.

As I ride on, I don’t quite feel in the mood of a man about to attend a Dharmic event. The over-sweet grins of churches begin to tire me. Where are the marvelous tile-roofed wooden temples of Kerala that glossy travel magazines seduce us with? I arrive at the portico of the CVV’s guest house. It’s an unprepossessing building. I am given a room, which is pleasing with its spartan functionality.

Before long Dr. Arundhati Sundar, drops in to greet me. She’s Academic Outreach Coordinator of Chinmaya International Foundation (CIF). She’s infectiously friendly and has a wealth of information to share about the place and the institution. My mood lifts immediately. “I’ll take you to the heritage part of the campus but let us first have some tea,” she suggests. Padmaja and Hari Kiran Vadlamani, had just arrived and they join us at the cafeteria.

The Chinmaya International Foundation created by Swami Chinmayananda committed itself to this Veliyanad campus in 1990. (Arundhati reserves the story of how that happened for later- after we have toured the heritage area.) At this campus, CVV has been running a university for two years now, while CIF continues with its Sanskrit research and academic programs in Indian Knowledge Systems and caring for its growing library, which is esteemed by research scholars from all over. 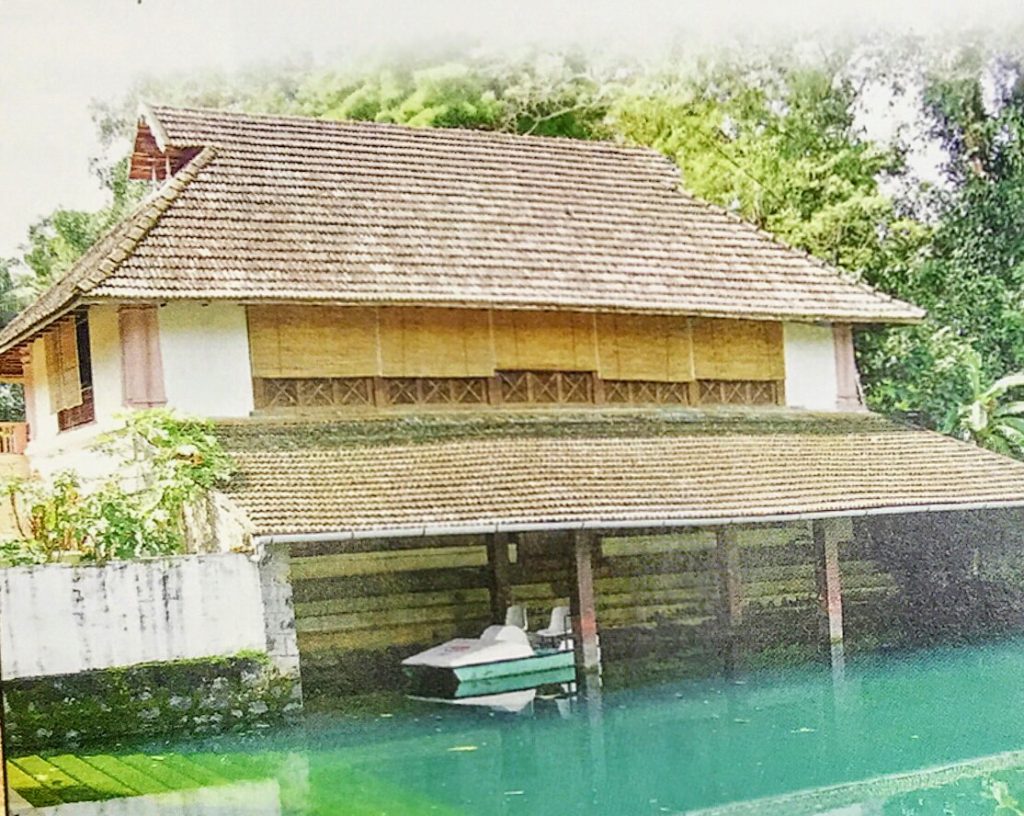 Leaving the cafeteria, we are led by Arundhati down a dozen stone steps: suddenly, we are in a world of some centuries ago. There’s a vast well swept yard of about half an acre clearing amidst woods. On it stand three fine old buildings of great dignity and beauty. Silence reigns. Here was the Kerala of my imagination and longing – beyond as it were, the noise and kitsch of what I saw on my way here. 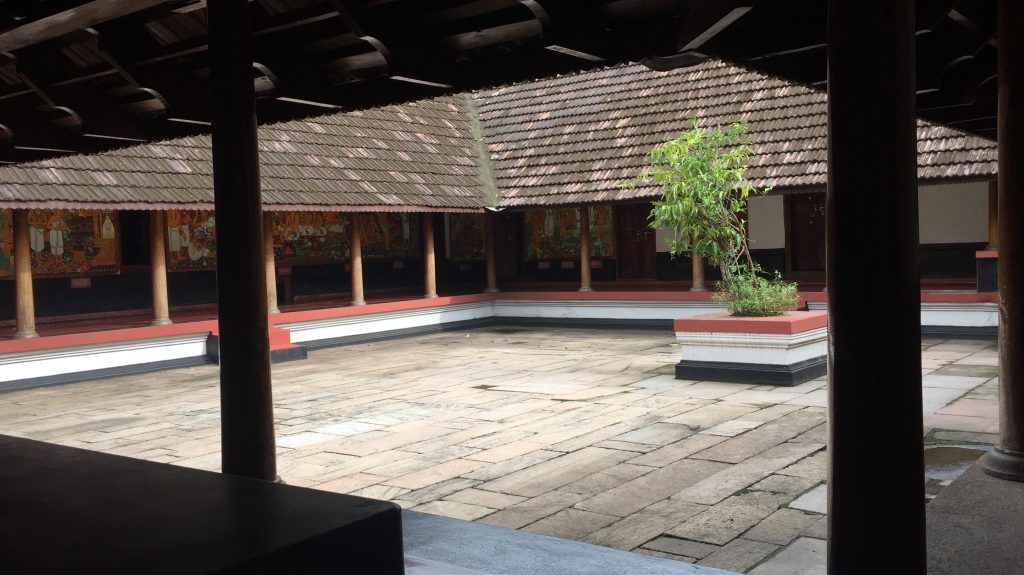 ‘Melpazhur Mana’ says a quiet sign on the wall by the entrance of a vast house. This is the ancestral home of Adi Sankara’s mother Aryamba, who was married to Sivaguru of Kalady, some 40 kM away. It was in this maternal home she gave birth to her son. We enter the house. It’s a house built around a vast courtyard. Arundhati’s usually soft voice goes even lower, to barely audible whispers. Passing the raised reception platform (Poomukham), we enter spaces around the courtyard. We have on the south a large raised area (Tekkini) where the extended family gathered. Ending the passage is a small puja room. Next to it is the room where I had the most transporting experience of my long life. It is nearly dark and still. An oil lamp burns without flickering in front of an altar- as it has done continually for 28 years. As my eyes get used to the diminished light I discern several people sitting in deep meditation on its cool floors. It was in this room that Child Sankara was born. In Malayalam this is reverentially called ‘Sankara piranna muri’.

We sit for a while and tip-toe out. We are now distinctly slower and deep in silence as we walk the courtyard’s canopied way. We sit down facing the ‘piranna muri’ across the courtyard. On the long wall behind us is a continuous mural on scenes from Sankara’s childhood. The figures are fluid in their actions and done in calming pastels. Arundhati resumes in whispers: “For centuries before and for the over 1200 years since Baby Sankara was born here, descendants of that extended family of Namboothiris has lived here. They had been endowed with several hundred acres of productive fields and woods. Their mandate was to maintain over 8 temples in continuous worship. Conducting annual festivals and the periodic kumbhabhishekams were their responsibility too. “As time passed, winds of change blew over Melpazhur. Hard times came upon the family. Parcels of land were sold from time to time to maintain temples. In the 1950s the government’s Devaswom Board took over the management of temples. Men that had lived close to the Mana and its environs now traveled afar in search of livelihoods. Thus came about the rupture of a culture that integrated land, people,work, living, worship and related festivals, arts and crafts. “Around late 1980s the descendants of Melpazhur Mana, its lands now reduced to about 9 acres, reluctantly decided to sell out. By a propitious circumstance it was about when Swami ChinmayanandaJi was looking for a place to build the Chinmaya International Foundation. They had looked at over 40 places when news of Melpazhur Mana, Aryamba’s ancestral home, being up for sale arrived and met his acceptance: he had grown up in these parts after all and, had he not also on gone on to spread the word of Adi Sankara?

Arundhati ends the story with a pleased chuckle: “A few days before the property was transferred we discovered Swami Chinmayananda Ji’s grandfather and a grandfather of the then head of the family had been cousins!”

Over the next 24 hours I was to repeatedly return to the Mana to indulge myself – seated on its smooth floors – to reveries of how those times must have been. Here Sankara had his Vidyrambham and his Upanayanam. Here he must have frolicked and observed. Between here and his father’s house at Kalady he learnt his Vedas. His teacher declared the boy an adept when he was but 8. He left home by foot, a Sanyasin in search of his Guru by the River Narmada. He returned just once to Kalady. As his mother Aryamba lay dying Swami Sankara arrived to keep the promise he had made to her: that she’d see her son before she died . He cremated her himself with full Vedic rites. For a Sanyasin to even return to his home was sacrilege in those times…but this! But then, Sankara was a revolutionary – the reality he saw was different.

I rose early on Guru Purnima day. By 5 AM, I was at Adi Sankara Nilayam. A lady was tending to the lamps. I shall sit quietly for a while, I tell myself, but soon, a huge reluctance to get up comes over me to get up and leave. I trudge my way to the auditorium. About 200 young boys and girls in their teens wearing bright smiles are tittering excitedly. Soon they are seated in circles around 11 homa kundas. Swami Sharadananda Ji’s sonorous voice leads everyone in Guru veneration. Wispy smoke rises from tens of circles formed by students. I am a mere awed witness, asking myself if the word ‘homage’ rose from ‘homa’.

After breakfast, we reassemble for the commencement ceremony. Sri A.Sundar, Academic Outreach Coordinator commences the proceedings. Vice Chancellor Prof Mahadevan is a remarkable man. A practicing Vaidika, and the current Director of IIM Bangalore, he had taken a break to get the CVV started. After two years he is handing over charge to Smt Gauri Mahaulikar, eminent Sanskritist and an expert in Vedanta. They both address the students explaining the difference in the education they’d receive at CVV: even secular subjects like commerce, accounting and business are taught in parallel with Sanskrit. They are imparted knowledge, along with human values.

Hari Kiran Vadlamani begins his commencement address. It’s a virtuoso performance explaining the purpose of his work with Indic Academy. India’s traditional knowledge system is not some outdated archive but a living treasure awaiting to be discovered by a materially successful but curiously puzzled modern societies across the world. The students graduating from CVV would meet unique and unexpected opportunities because of their grooming in a Dharmic atmosphere. They’d be in great demand in an automated world heading for ‘permanent leisure’. The emerging personal voids await Dharmic solutions. As an example, he narrated instances of how the West was discovering the centrality of one’s mother in corporate success. When he says he’s committed to installing 108 Murtis of Adi Sankara around the world, it strikes a joyous chord in the rows of students.

I reflected on this response in young people in their teens. When my turn to speak came next, I stood humbled and apologetic. I explained how my generation had veered away from our culture and ways. How our uncritical admiration of Western ways has devastated our society. I saw my environmental work as something of an atonement – the only access I found to our culture was through lives I found committed to nurture of Nature.

Swami Advayananda concluded the event with a gentle lecture. In soft cadences he led us all through a spell of meditation. My mind wandered to Melpazhoor Mana where Adi Sankara was born and ventured out from, never to return. He had traveled by foot to the four corners on this land. I gazed at the earnest young faces seated in the hall. They hail from Kashmir, Punjab, Uttarakhand, Arunachal Pradesh, Orissa, Karnataka, Maharashtra… from just about every part of Bharatavarsha that the Adi Sankara had trod. Across over a millennium, His voice has beckoned them to the fountainhead where it all began.