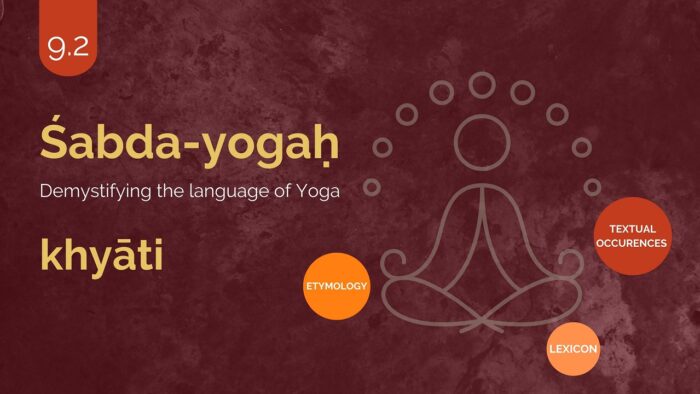 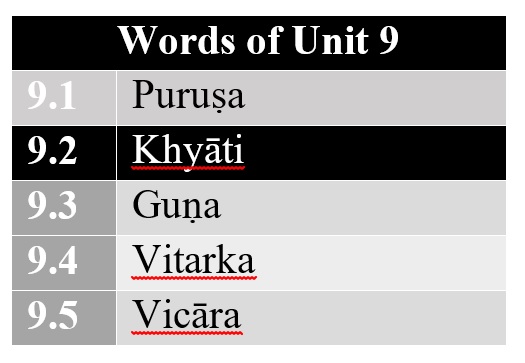 From among the above five words for this unit 9, this part discusses the second word khyāti.

In amarakośa one entry is found –

There are 6 occurrences of the term in Yogasūtras. It is interesting to note that this term is found in all the four Pādas of this text. A chapter wise summary of these occurrences is presented hereunder.

Here the term khyāti is used in the context of the Para – Vairāgya – higher state of dispassion. SadāśivaBrahmendra (one among the commentators of the text) describes khyāti as साक्षात्कारःsākṣātkāraḥ – direct realization – in this context. And most other commentators agree upon this interpretation. Commentators inform that this khyāti is said to arise from the teachings of the guru and also the Śāstra-s. This khyāti becomes more clear by reaching the state of Saṃprajñātasamādhi.

In Sūtra 2.5 the expression ātmakhyāti is found. This term is part of the definition of Avidyā. Knowing the Non-ātman as the ātman (anātmaniātmakhyāti) is also an expression of āvidya.

In Sūtra 2.26 the expression vivekakhyāti is found. This is a very critical concept in yoga. Viveka here refers to the firm discriminative discernment that Draṣṭā and Dṛśya are different from each other. It is only by this – the state of Hāna or Kaivalya is reached. The self-same term is used in the Sūtra 2.28 also where the practice of limbs of Yoga gradually leads to vivekakhyāti.

This Sūtra from the third pāda speaks of the sattvapuruṣānyatākhyāti – the clear knowledge that the intellect (Sattva) and the consciousness (Puruṣa) – are distinct from each other. Saṃyama on this leads to the ability to control all beings and omniscience.

This sūtra speaks about the attainment of dharmameghasamādhi. It is attained by the having detachment in Prasaṃkhyāna – the powers mentioned in Sūtra 3.49 is Prasankhyana according to SadāśivaBrahmendra. When these powers are disregarded, vivekakhyāti becomes very firm and this leads to dharmameghasamādhi that culminates in Kaivalya.

This term is not found in these two texts.

Tabulation on Distribution of References in Yoga Texts 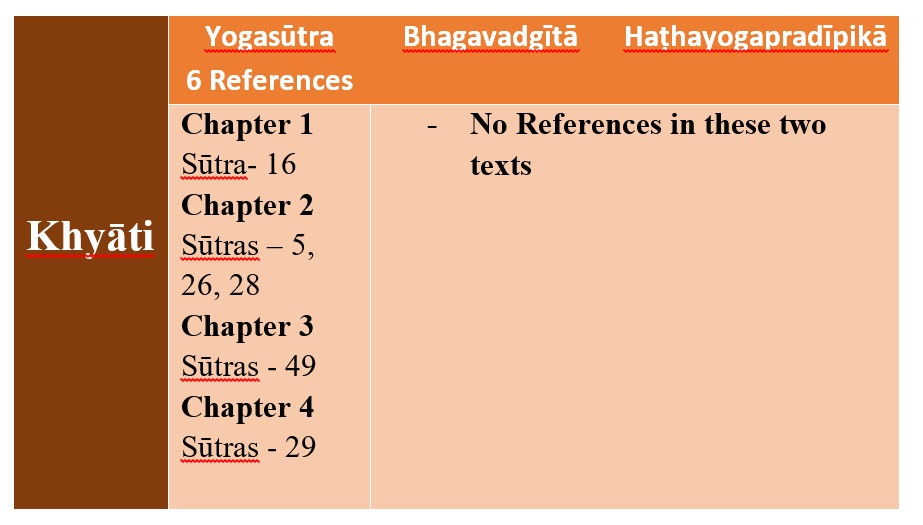 It could be understood that from among the three types of Yoga texts – the term Khyāti is found only in the Yogasūtras. Even in Yogasūtras we see four kinds of khyātis (knowledge/understanding).

Thus as evident from the references and discussion it becomes very clear that Khyāti is a very important concept in Yogasūtras which has implications right from Avidyā to Kaivalya.

Unit 9 To be Continued…