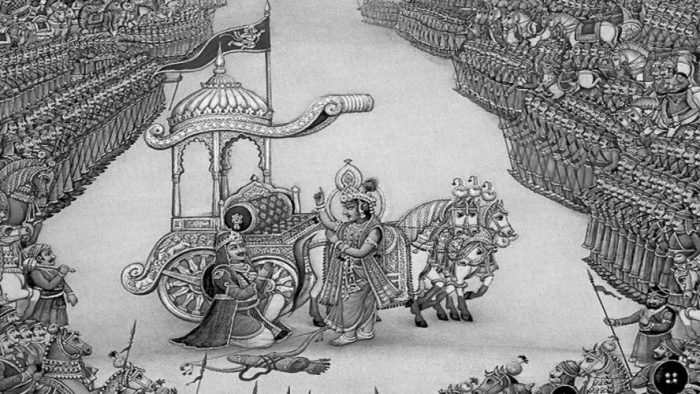 Mahabharata has been the Itihasa that defined a part of my identity. It has defined and continues to define my consciousness. Whenever I read the Itihasa, take any episode of it, a kinship is formed between me and those immortal people within. I feel invested, physically, mentally, emotionally and spiritually. From wanting to knock some sense into Shantanu, feeling like bursting into the Kuru Sabha and defying the Adharmis and feeling the exhilaration of speeding through the bloodied battlefield of Kurukshetra with none other than Krishna Vasudeva as my charioteer, I feel one with the epic. I am sure I echo the sentiments of crores people who consider themselves as the spiritual inheritors of this legacy, The Bharata.

I don’t have to remind anyone who is aware of the epic even at a superfluous level, of the multitude of emotions that overwhelm us when the ill-fated dice game takes place. Falling prey to the crafty abuse of tenets of Kshatra Dharma, Yudhishtira gambles away the empire, the sweat and blood of his valiant and loyal brothers, allies and soldiers and the horror does not stop there!

Jumping right to the phrase that stayed with me during the landmark workshop conducted by Prof Vishwa Adluri and Dr. Joydeep Bagchi, Mahabharata is not something that has happened. But it happens and it will happen, all through the clashes between Dharma and Adharma at micro and macro levels, till eternity, till the end of human civilisational and beyond. It is an empire as rich as the Bharatavarsha itself that was passed on to us!

Then came the onslaught of the Church dominated Western education which did manage to market itself as ‘rational’ though it remained loyal to Abrahmic thought, all through. They told us that our eternal legacy was a myth. They told us it was a figment of someone’s imagination! Some of us fell for it. Some of us fought on. Most of us battled this colonial hangover retaining the wisdom of Veda Vyasa in our hearts. Some of us thought a devoted study into our history would ‘prove our beliefs right’!

In this need to ‘prove’ our ancestors as ‘real’ to those whose concept of reality itself is questionable as Adi Sankara would have felt, we gambled our legacy away! (Fitting descendants of Yudhishtira, aren’t we?). Like Shakuni pretended to appeal to Yudhishtira’s Kshatradharma, they pretended to appeal to our pride in our history and said, there is indeed an element of truth in the epic. Unaware of the trap, some of the past scholars played into their hands and lo! The immortal epic in its infinite glory is maliciously reduced to just a bloody war. Not just that, interpolations were done by conveniently misinterpreting select phrases just to suit their theories. The theories of European (Read Nazi) Supremacy which fantasize that India was once the home of dark skinned people who weren’t capable of fighting the ‘superior, white skinned and technologically abled Aryans! The words Krishna (interpreted as ‘dark’) and Arjuna (interpreted as ‘white’) were extrapolated to indicate these two ‘races’ of ‘Aryans’ and ‘Dravidians’. If you are wondering how it makes an iota of sense when Krishna and Arjuna of our Mahabharata are on the same side, well I hear you. But apparently, logic and rational thinking is permitted to take a back seat (rather shoved to the back seat) when ‘proving’ Nazi Supremacy is the end goal of these indologists instead of a humble seeking and rational inquiry into the universe that is Mahabharata.

The horrendous appropriation continued. These ‘indologists’ arrogantly dismissed the aesthetic and spiritual crux of this Itihasa as a figment of Brahminical imagination. Yes, as the wilful attempt of these Brahmins to hold sway over the rest of the masses. They opine and push that the timeless wisdom of Mahabharata is the result of a crafty power thirsty priestly class that sought to dominate the country and almost exhort the populace of India to reject the very identity bestowed upon us by the undying Rishi Parampara. The message is clear- “Desert those Brahminical ancestors of yours and become our bootlickers, you inferior race!”

I am eerily reminded of the events that followed the dice game. Assaulting empress Draupadi, dragging her by hair to the Sabha and upon her diligent questioning, heaping insult over insult, finally asking her to desert her husbands and choose the son of Dhritarashtra as her Lord and husband. A wicked and condescending offer which the illustrious empress spat upon and stayed strong by the side of the sons of Pandu. It did not take her long to see through this facade of ‘freedom’ offered to her which was actually a life of humiliating subservience. Draupadi scorned the ‘offer’. Invoking the tenets of Dharma, she questioned the elders and their own wisdom. Calling out to the infinite one, beyond the boundaries of this world, she protected herself from those assaults. Finally, succeeding in making the blind king guilty of the whole debacle, she got the unethical game annulled and freed her husbands.

This warning of Bhagavan Vyasa echoed in my heart even during the eye opening workshop by Prof Adluri and Dr. Bagchee. Do we, the spiritual descendants of the great Bharata have that spark of Draupadi within us to repel these malicious attacks by those ill intentioned sections of Western Indology? Do we have it in us to throw out these wily ‘teachers’ and bring in the immortal teacher, Veda Vyasa himself to guide us like Prof Vishwa Adluri courageously did?

The painstaking research and findings of the duo is documented in their trailblazing book. Reading through, I could only imagine the rigour, courage and commitment needed to unravel the trap that is German Indology. A book that every Indian must read. Just to know the attack that is mounted on our identity and the bold fight put up against it by a handful of noble souls like these two academics. We are also educated about the relentless endeavours of historians like VS Sukthankar who embarked upon compiling the critical edition of Mahabharata at BORI (Bhandarkar Oriental Research Institute, Pune), drawing from the various rescensions. It dawns upon on us that the three decade long work of compiling done by a team of selfless Sanskrit Pandits (paid some annas per line drafted!) is no less than a Yajna. “Philology and Criticism” is also an inspiring reminder that the flame of that Yajna still blazes through.

This is an experiential essay written after attending the 1-day workshop on the Mahabharata conducted by Dr Vishwa Adluri and Dr Joydeep Bagchee in Bangalore. IndicToday had previously made an announcement regarding the same. The workshop was held on 15th August, 2018.