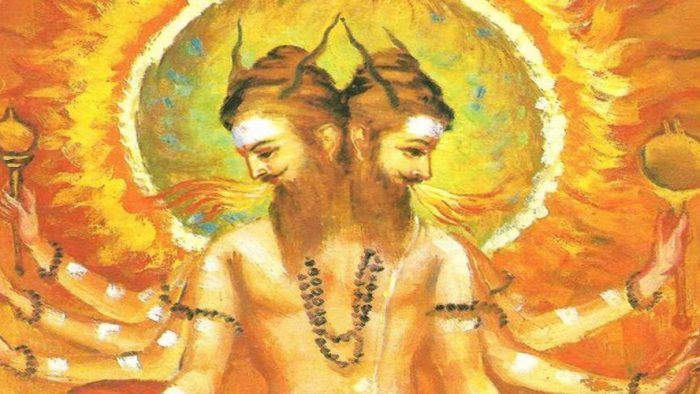 This is an intriguing story from the very early parts of Adi Parva. Ugrashrava Souti prepares to narrate the story of Mahabharata to the sages of Naimisharanya. Sage Shounaka, the leader the mahayagna, seeks to begin with the story from the lineage to which belongs – that of Sage Bhrigu. The great Souti is very pleased to narrate the story of Bhrigu lineage. Sage Bhrigu was born when Brahma himself performed the Vaaruna Yagna. His son was Chyavana. Chyavana’s son Pramati. Pramati received a son from Apsara Ghritachi – who was Ruru. Sage Shunaka was none other than the son of Sage Ruru from his beloved wife Pramadvara. He was the great grandfather of Sage Shaunaka – the performer of the great Yagna at Naimisharanya, where Sauti has graced to narrate the story of Mahabharata. Sauti begins to narrate the greatness of Shunaka but Shaunaka becomes curious about Chyavana – the son of Bhrigu. Sauti then begins to narrate the circumstances of Chyavana’s birth. Thus opens the Mahabharata.

The beautiful Puloma was the wife of Sage Bhrigu. The sage was much in love with her. She was pregnant with his child. Their union was one of great love with each made for the other. Once, the great Bhrigu, was away from the Ashram for bath in the nearby Sarovara. A Rakshasa, also called Puloma, sneaked into the Ashram. His eyes, at once fell on the beautiful Puloma. Struck by Kama – the lord of desire, his discretion fell aside. Puloma, unaware and innocent, thought of him as an atithi. In the tradition of the Ashrama, she began to treat him with the food of an ascetic. Now, deeply immersed with lust, the Rakshasa was delighted and at once thought of abducting her, telling himself that his desire of a very long time was to come true now. There was a reason for it. The Rakshasa, had in the past, had taken her as his companion. However, the father of the beautiful Puloma had given her in marriage to Sage Bhrigu in the tradition of the Shastras. The Rakshasa had never forgotten what he considered as an injustice to him. He thought of this as an opportunity to get even and abduct her. It did not take a long while for the thought to become conviction.

Just then his eyes fell on Lord Agni in the Ashram – the eternal light lit by Sage Bhrigu in a sacred place of the Ashrama. “Hey Agnideva – You are the greatest witness. You need to now declare whose wife she is. You are the most prominent among the devas. I had sought Puloma to be by wife for her grace and beauty. But her father, a man of untruth, instead gave her in marriage to Bhrigu in the big tradition long after I had taken her as my companion. Is she the same Puloma? Agni – you need to adhere to the dharma of a witness and tell me the truth here. The injustice meted out to me by her father is burning me from within. I shall take her away from here to my place. Is it not an unrighteous act of injustice that he gave her in marriage after I had taken her as my companion? Hey Agni – you tell me whose wife she is? Hey Agni – you are within everybody. You are a witness to every act of righteousness and unrighteousness of ours. Has Bhrigu not made my wife as his? As a result, is she not my wife too now? Once I hear from you – I shall abduct her from here and you will be a witness to that”.

The great Yagneshwara was now put to a dilemma. Lying would be adharma. But telling the truth meant inviting the wrath of Bhrigu. Silence was not an option, Puloma – the Rakshasa would not budge till he heard from Agni. After a careful consideration and great thought Agni recounted “Oh Puloma, she is indeed the same Puloma that you had taken as your wife earlier. But please remember that you never wed her in the high tradition of Mantras. Her father was keen that his son-in-law was an illustrious man (varalObha) and hence gave her in marriage to Bhrigu, but in my presence and in full conformance with the Mantras. This is how I see the marriage of Puloma”. The moment Agni completed his recounting, Puloma – the Rakshasa took the form of a pig and carried her away with a speed greater than the wind and mind. This disturbed the child in the womb. Using immense yogic power, the child pressed himself out of Puloma’s womb. The child became famous as ‘Chyavana’ after this great fall from mother’s womb. Puloma – the Raskhasa, could not bear the immense grace of the child. He left her hand but before he could make an escape, he was simply burnt to ashes from the divine rays coming out of Chayavana’s eyes. A grieving Puloma began to carry Chyavana back to the Ashram with great difficulty. This sight of his daughter in law grieving and struggling moved Lord Brahma who came down to console her. Her tears formed a river which Brahma named as Vadhoosar. The river flew around Sage Bhrigu’s Ashram.

By the time Puloma reached back the Ashram, Sage Bhrigu was in great fury. He at once roared “Who declared to the Rakshasa that you were my wife? He cannot learn this by himself. You must tell me Puloma – and I need to know who dared to do this without fearing my curse”. Puloma had no other option but to reveal the act of Agni. Bhrigu, true to his anger, did not think beyond and cursed Agni to be a Sarvabhakshaka – one who consumes everything. Yagneshwara was grief-struck and at the same time very angry. He questioned Bhrigu how recounting the truth as a witness was bad enough to invite an ignominious curse. “Oh Sage! Are you not aware of what the dharma of a Saakshee (witness) is. When somebody invokes one as a Sakshee – one is bound to tell the truth. In the absence of which, one pushes seven generation of ancestors and seven of the descendants into Naraka. You are much aware of the perspective of the Shruti. For your overreach, I should have returned your curse with one of my own. But I shall respect your status of being a Brahmana and Sage. Beyond everything you have grown me here in your Ashrama through your Yagna. Hence, please listen. It is through me that the Devas receive their powers. I am their face – the mukhasvaroopa. If I become a sarvabhakshaka how can I remain the mukhasvaroopa any longer.” Not willing to curse the sage back, the grief struck Agni simply vanished from all Yagnas, as the only means of registering his protest. All Yagnas at once came to a halt. Without grace of Agni, the world lost its vigor and began to tremble.

This set a sequence of events. All the sages expressed their grief to the Devas and sought advice. All the devas and Devarshis then sought a relief from Lord Brahma himself – the father of Bhrigu. Lord Brahma had no other option but to call Agni and console him. “Oh Agni, you are the reason for Srishti-Sthiti-Laya. You are the very reason for the performance of all Yagna. You are wearing the three worlds with your power. Why are you sulking like a commoner? You are alone the ever pure in this universe. Without the shelter that you offer, life does not sustain itself at all. All your flames do not consume anything without discretion. Only the downward flames consume everything. One of your flames that reside in all beings – also consumes everything without discretion – the kravyaat flame. In any case, just as Sun purifies objects through his touch, you are the purifier of all objects that you touch. You are the same as the grace that results from your acts. From your grace, please make the Sages curse true – you will touch everything through your grace and make it pure. There is no impurity in you. Please get back to your normal being in all the Yagnas and accept the Havis – that is offered to the Devas through you.” Lord Agni was satisfied and returned to his duties. Devas and Devarshis were relieved. The vigour of the universe was restored.

Once again, in the rich tradition of Mahabharata, this story contains so much within a single narrative of few characters. The Puloma, the Rakshasa, can simply not appreciate that the beautiful Puloma has effectively made a transition. Unless she sought, he has now lost any right on her. Puloma himself is not able to recognize her in the absolute, the agni within him has weakened so much that he needs the vigour of none other than Yagneshwara to even absolutely recognize her. Lust has taken over him as much. Puloma, the beautiful wife, does not recognize him at all and she has nothing of the past with her. The Agni within her is with great vigour and but has no relation to the past. Bhrigu, on the other hand, grows the Agni but fails to recognize the anger (krOdha) is another agni that seeks to extinguish the very agni that is essential for a life of vigour. The sage is yet to win over his sense of possession. Agni himself is aware of his powers of burning of the physical but always needs to be reminded of what he offers through physical burning – the universally touching grace. Agni must as much burn as must his grace invigorate the universe.

The great Mahabharata story starts with a simple, dramatic story about Agni and its place in our lives. We need the grace of Agni to touch the entire universe and we cannot suffer its absence. Neither should our anger result in our agni within within burn universe should our lust weaken the vigour of our agni so much that we lose our sense of discretion and righteousness. We need it as much so that the world is blessed with its grace. The entire Mahabharata then is a result of an imbalance in the Agni.