Mahabharata Metaphors: Arjuna – The Sensibility Of An Arya 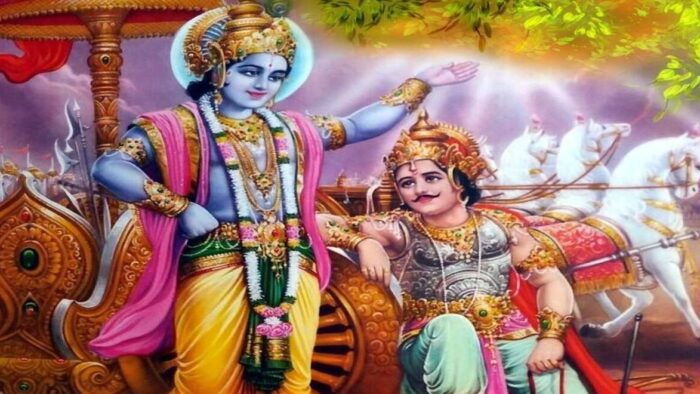 The greatness of Mahabharata is that it has the grand vision of Hampi, the architectural grandeur of Brihadeshwara, and embellishments of Hoysala architecture. At one end it portrays the flow of civilization. At the other end, it carves every single character with great empathy, patience, sensitivity, and purpose.

The microelements of Mahabharata compose themselves with each other together creating a macro-structure that stands for a civilizational philosophy. Each character distinguishes himself or herself with specific attributes that serve the metaphor that the story proposes to carve.

In this article, let us explore the personality of Arjuna, the madhyama Pandava, through one story in Virata Parva.

Towards the end of Virata Parva, the Pandavas are formally introduced to King Virata by Arjuna and Prince Uttara Kumara. Virata sees the Pandavas in the attire of Kshatriyas but recognizes them from their personas of the last one year. He is surprised by their Kshatriya attire and occupying seats meant for Kshatriyas.

First Arjuna and then Uttara introduce them as Pandavas. Virata is overcome by the enormity of Pandava presence. At the same time his own rude and haughty behavior with Kanka Bhatta – Yudhishthira in disguise – haunts him. He finds it difficult to come to terms that he treated the Pandavas as his servants.

Keechaka may have died but the ill-treatment that Draupadi suffered at his hands and his own inability to intervene in the stand for what is right haunts Virata. Above all, Virata has hurt Kanka Bhatta directly by hurling the dice at his face resulting in Yudhisthira suffering a bloody nose.

It may not even be possible for Virata to remember every single word that he spoke with the Pandavas in the previous months and which one could be considered as belittling the Pandavas, even if he did not know who they were. He goes to the extent of submitting his entire state to them as an offering.

In summary, Virata is quite tense with his situation. He does not say that very explicitly but subtly and through his profuse praise of the Pandavas. Finally, Virata proposes to convert his embarrassment into an opportunity and seal the relationship with the Pandavas. He offers his daughter Uttara in marriage to Arjuna.

Arjuna respects the offer – “A marriage between Matsya-s and the Bharata-s is indeed honorable”. In that, he offers an equal position to Matsya. Arjuna never forgets that he is not just a Pandava, but a Kuru and Bharata prince.

Arjuna says he accepts Uttara but not as his wife but as a daughter-in-law. He proposes that Uttara be given in marriage to Abhimanyu, his son from Subhadra. Virata is, of course, quite surprised.

When he is himself giving his daughter in marriage and it was a practice of those times to take many wives and sometimes young princesses, why is Arjuna rejecting the proposal? Virata cannot hide his disappointment that his daughter would not be married to one of the Pandavas.

There is a hidden concern if Arjuna thought of the proposal being below his stature. Clearly, Virata, even in a state of concern, does not want to abandon the high honor of a Kshatriya. Of course, Abhimanyu was very young and his prowess was not known to the world yet. Virata directly asks Arjuna in as many words.

Arjuna in his response shows the world what Arya dharma was. “Oh king, I have spent a year in your Antahpura. Your daughter has spent time in my company with immense faith in me. She came to me often alone and at other times along with her friends.

I have treated her very affectionately (like a daughter – vaatsalya). She has looked up to me as an elderly person and an Acharya. [The truth of that relation must not be altered even after my real identity is revealed]. She must continue to be my daughter. A daughter in law is very much a daughter.

Uttara is as pure as fire. The world must not develop any doubt about Uttara today or in the future. [The world must not think if there was a different relation between Uttara and Arjuna, and hence they went into marriage soon after the duration of my hiding came to an end.

A permanent stigma would be attached to our relationship in the year I spent in the interiors of your quarters]. That would be a great injustice to Uttara. Beyond everything, who is she marrying? It is Abhimanyu. He is equal to me in every aspect. He is the nephew of none other than Srikrishna. He has acquired the best of all knowledge and skills that a Kshatriya must acquire.

Uttara will be married to a great Kshatriya of our times. That would be justice to her as well. Hence, it is my suggestion that Uttara be given in marriage to Abhimanyu”.

Virata is now pleased with Arjuna’s thoughtfulness. In his moment of panic, he forgot the implications of his offer on Uttara. Varata accepts Arjuna’s explanation. It is at once ensuring that everybody’s well-being is taken care of. Arjuna demonstrates remarkable sensitivity in his explanation.

At once, Arjuna ensures that Dharma is not violated, worldly propriety is maintained, the authenticity of a relation respected, and the aspiration of King Virata is fulfilled. At the same time, Pandavas acquire a new relation and strength. Virata had a huge army but without his chieftain Keechaka the army was without a leader.

Integration with Pandavas served his own security interests. At the same time, Pandavas developed a new relation and strength that would come in handy in their future war against the Kauravas.

In this complex situation, it is noteworthy Arjuna did not lose sight of Uttara and her reputation. In addition, Arjuna upholds the importance of authenticity. His relationship with Uttara during the hiding must be true. A well-spent year cannot become false.

What of all that Arjuna taught Uttara? In the falsitude of the relation, would everything else that came along with the relation also be lost. That cannot be.

In many stories in Mahabharata, this aspect is highlighted. Saatatya is maintained at multiple levels. At the level of life, philosophy, tradition, practice, and finally a personal relationship too. Everything is Flow.

It is all part of the Ruta. Ruta ought not to be disturbed. If there were true beauty and truth in the relationship between Arjuna and Uttara in the year of hiding, it ought to continue after the hiding is completed too. This continuity is part of the constant seeking of the subtle Dharma – the Dharma sookshma.

This episode also highlights another aspect of Mahabharata. It is full of Dharmic conversations. Every conversation between two people covers an aspect of Dharma, a decision making thought process, thinking through in multiple directions of what is right and what is wrong.

Of course, this episode is also about Arjuna and his own personality. Arjuna is praised in Mahabharata for his extraordinary conduct and clarity of Dharma.

All the Pandavas demonstrate extraordinary respect and concern for women and their honor, and Arjuna as well.