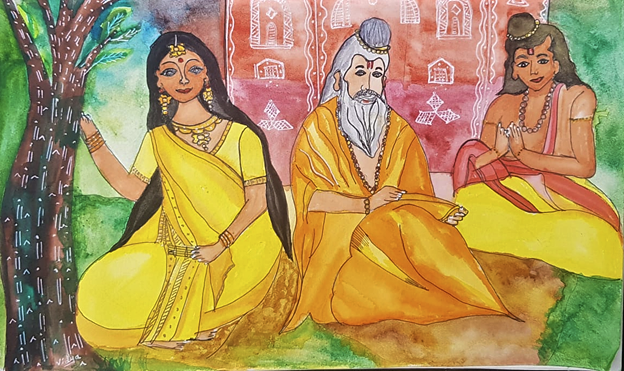 “He must not have eyes, but he cannot be blind”

Rishi Devala, a doting father, was now in a strange situation. He had always indulged in every demand of his darling daughter. But the latest one by the sixteen year old Suvarchala had taken him by surprise and shock. It seemed more of a riddle than a demand.

Suvarchala, the intelligent and beautiful daughter of Rishi Devala had shown keen interest in learning from a very young age. She would sit by her father as he taught many students in his Gurukula. By the age of sixteen, she had gained expertise in many shastras and was now teaching young students at the Gurukula. In her spare time, she immersed herself in svādhyāya (studying the scriptures).

Watching his child blossom into an intelligent young lady, Rishi Devala knew it was his duty to find a suitable life partner for his daughter. Being a great Vedic Scholar, he also knew very well that only his daughter had the right to choose the right partner. After all the vedas had clearly prescribed that a daughter who practiced brahmacarya was expected to marry a man of her choice who matched her in intellect. (1)

One morning Rishi Devala asked Suvarchala what kind of life partner she desired. Suvarchala gently and firmly put forth her demand.

“Father, He must not have eyes, but he cannot be blind. I will marry such a man.”

This riddle had puzzled Rishi Devala and was now giving him sleepless nights. What puzzled him even more was how Suvarchala did not seem to be bothered about their conversation.

“Silly girl! She really thinks I can fulfill all her demands. Where on earth will I look for this strange man? I must be prepared to see her as a brahmavadini all her life.”

Rishi Devala was distracted by this thought at all times now.

“Father! You are getting late for your classes”

Suvarchala shook her father from his reverie.

said Rishi Devala and quickly gathered pace to his Gurukula.

That day, he announced in the student assembly that he was now looking for a suitable groom for her daughter. He instructed his students to travel far and wide and extend invitations to suitable Rishikumaras (Sons of Rishis) to visit him on an auspicious day.

Soon, that auspicious day came and a large number of Rishikumaras gathered at Devala’s doorstep. Devala greeted each one of them as per the custom. Special seating arrangements had been made to accommodate all of them. Suvarchala too greeted them and took the centerstage.

In a firm and clear tone she announced,

“I welcome each one of you to my father’s ashram. Who among you does not have eyes but is not blind. Such a man may come forward now. My father will perform my Kanyādāna. “

These words struck the Rishikumaras like a thunderbolt. Obviously no one came forward. Instead,  they mocked and insulted Suvarchala and left the place one by one.

Rishi Devala was deeply disturbed by the whole incident. But he did not say anything to Suvarchala. He had never raised his voice with her and he had no intention to do so now. Suvarchala as usual remained calm and went about her chores in the Gurukula and continued spending time in svādhyāya.

One fine day, a handsome and bright young man came to visit them. He introduced himself as Shvetaketu, son of Uddalaka. Rishi Devala’s happiness knew no bounds. Of course, he had heard about ‘The Great Shvetaketu’ , who was well known as the exemplary seeker of supreme knowledge. His father had taught him the knowledge of Tattvamasi.

Devala greeted Shvetaketu with great festivities and called Suvarchala to meet the visitor. With great excitement he said :

“Dear, here is Shvetaketu! the most learned young man we have heard so much about. You must marry him”.

Suvarchala’s discerning eyes could not ignore the glow on the young man’s face. But, her father was annoying her now. She was irked that her father had brought up the topic of the marriage and had completely forgotten her demand.

Noticing the irritation on Suvarchala’s face, Shvetaketu wasted no time in uttering these words :

These words had the desired impact on both Rishi Devala and his daughter Suvarchala. Devala was convinced that his instincts were right after all.

But, Suvarchala hid the excitement and calmly asked :

“Oh ! Really ! I see that you have such beautiful large eyes. How can you say you do not have eyes? Can you explain, please? ”  (2)

Shevtaketu then spoke these words (3) :

“My lady, It is crystal clear to me that I am experiencing the world outside me only because of the supreme being. There is absolutely no doubt in my mind’s eye on that matter. Therefore, I am not blind”

Suvarchala was now completely convinced that Shvetaketu was the right person with whom she could spend the rest of her life.

Rishi Devala was overjoyed. Suvarchala and Shvetaketu married as per the vedic customs and entered Grihasthashram and lived happily ever after.

(This is an English translation of a Kannada article)