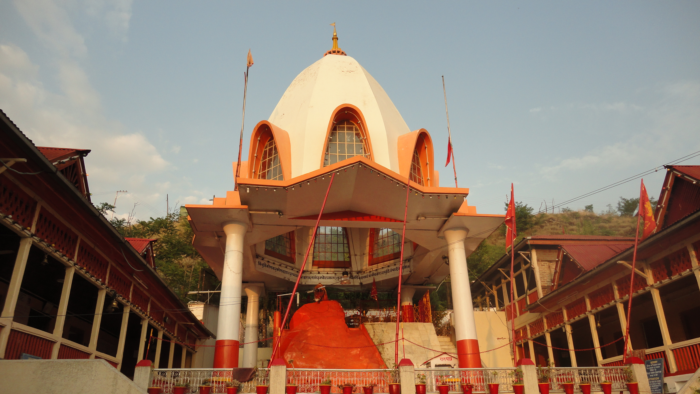 Traditionally the Hindu New Year is celebrated on Chaitra Pratipada – first day of the Shukla Paksh – bright half of the Chaitra month (March/April).  In Telangana, Andhra Pradesh and Karnataka it is celebrated as Ugadi, as Gudi Padwa in Maharashtra, and as Navreh in Kashmir.  In most of the North India, Chaitra Pratipada also marks the beginning of the much-awaited Chaitra Navrati Festival wherein the next nine days after dedicated to veneration of the nine forms of Durga – Shailaputri, Brahmacharini, Chandraghanta, Kushmanda, Skandamata, Katyayani, Kaalratri, Mahagauri and Siddhidhatri –collectively known as Navadurgas and hence the name Navaratri.  The ninth day of Chaitra Navrati also coincides with Ram Navami, the birthday of our beloved Lord Rama.

Samvat or Samvatsara means a “year” in Sanskrit.  The most common Samvats used in our country are the Vikrami Samvat named after King Vikramaditya to symbolize his triumph over the Shaka rulers which commenced in 57 B.C. and the Shalivahan Shaka Samvat which kicked off in 78 AD.  So, as we usher into the year 2078 of Vikrami Samvat and year 1943 of Shaka Samvat, another calendar that is worth mention is the Saptarishi Samvat – the era of the Kashmiri calendar which is believed to have commenced on first day of the Shukla Paksh of the month of Chaitra.  It is the oldest operational calendar in the world which is STILL followed by the people of Kashmir.

According to the Legend, the Saptarishis had once convened at Hari Parbat (Also known as Sharika Parvat, which is the abode of the Ashtadashbhujadhari – eighteen-armed Goddess Maa Jagadamba Sharika Bhagwati, the Supreme Mother and the presiding deity of the valley), at the propitious moment when the first beam of sunlight touched her Swayambhu Shrichakra form, to pay obeisance to her.  This very moment formed the basis of calculations for the Navsamvatsara or NAVREH, and the beginning of the Saptarishi Era.  Thus today we are heralding into year 5097of the Saptarishi Samvat. 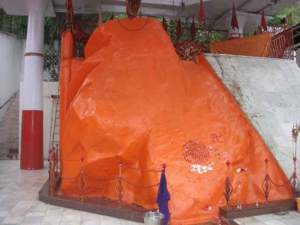 The most important ritual associated with Navreh is the preparation of a special Thal or platter called as Thal Bharun.  On the eve of Navreh, usually the eldest female member of the household prepares a special auspicious thal; preferably a bronze or Kansya platter is used.  She fills the thali with rice or paddy and then places tchoch’vor or small rice rotis, few lumps of cooked rice, pen  inserted in rice so as to keep it standing, small bowls salt and sugar each, some curd in a pot, some walnuts and almonds, a few flowers, a small mirror, and some money.  Finally, the most important item, a new Panchang or Janthari – Nachipatra is placed carefully on the rice mound.  The thal can never be complete without the Janthari or Nachipatra.  This thal is prepared with a lot of love and care, and another platter is gently placed over it so as to cover it. 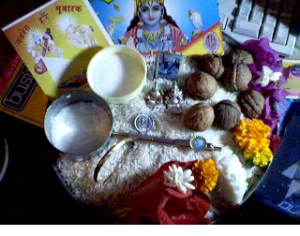 The following day, which is Navreh, before sunrise, the eldest lady of the family, carries the thal around, and makes sure that all the family members look at the thal first thing as soon as they get up, then see their face in the mirror, thus wishing for prosperity, well being and abundance in life, and writing something auspicious with the pen – a Gayatri Mantra or a simple Om.  Some walnut pieces from the thal are later immersed in the water body as a mark of appreciation to Mother Nature thanking her for beautiful flowers that are in full bloom in the spring season.

People of all ages dressed in new clothes assemble at Hari Parbat on this day to pay reverence to Mata Sharika Bhagwati.  It is the belief of the people of Kashmir that on Navreh, the energy effused by SriChakra is the maximum and many people have actually witnessed a burst of energy emanating from the Chakras of the holy rock.  Some devotees undertake Parikrama of the whole hillock.  This circumambulation starts from the temple of Maha Ganesha moving towards the rock known as Sapat Rishi – the spot where the Saptrishis gathered to pay obeisance to Mata Sharika 5097 years ago, further moving along the small temple of Mahakali and passing through Sidh Peeth – a place known for divine vibrations where many saints of Kashmir like Madhavji Dhar and Sahib Koul are known to have mediated, and entering Devi Angan, a vast expanse of land at the foothill and finally the flight of 108 steps leading to Chakreshwari temple.  People recite Indrakshi Strotram, Bhavani Sahasranama Stotram and other Strotams in the praise of the divine Goddess praying for happiness, prosperity and life free from ailments.  In doing so, the nine facets of the Goddess Durga or Navadurga conceptualized as Shailaputri, Brahmacharini, Chandraghanta, Kushmanda, Skandamata, Katyayani, Kaalratri, Mahagauri and Siddhidhatri embarks us on our of path of Chaitanya or consciousness.  The Kashmiris offer Taeher – yellow rice cooked with turmeric to the goddess and later distribute it among the friends and family members.

Navreh was the day spent in meeting and greeting friends and family, and soaking in the abundant gifts of nature and appreciating and praising and thanking Mother Nature.  The visit to Hari Parbat was often followed by visit to Badamwari or almond gardens adorned by deep rich hues of pink almond blossoms.  Women would bring Samavars – a traditional Kashmiri Kettle used to make and serve tea, to prepare Kahva – a Kashmiri tea which is a delicious sweet mix of almonds, cardamoms, cinnamon and generous amount of saffron.  Kahva or Mogul Chai was often accompanied by Loochi – a deep fried Kashmiri flat bread and Nadir Monji – the supremely delicious lotus stem fritters coated in rice flour and select spices before being deep fried.  Before migration, visit to the Badamwari was a much-awaited annual excursion by the Kashmiri Hindus and the day always ended with laughter, cheerfulness, hopefulness and sanguinity, and people wishing each other Navreh Mubarak.

Rekha Dhar holds an honors degree in Engineering from the University of Mumbai. She has deep interest in Indian philosophies, indigenous Indic traditions and valueRead more