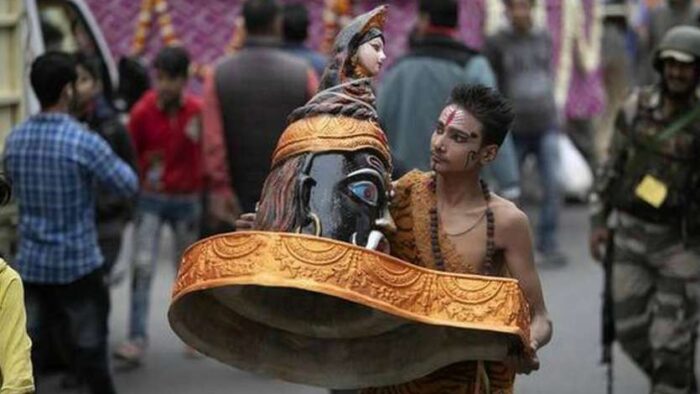 The Supreme Night of Shiva – MahaShivratri is one of the most significant events in India’s spiritual calendar.

Shaivites see Shiva as a Ubiquitous Reality – Universal Consciousness, the Ultimate truth, Infinite Love and last, but not the least as the Destroyer – one who ends the old cycle of time in order to pave way for new creation.  Lord Shiva’s influence on everyone is idiosyncratic and so are the ways of celebrating his greatness.  The devotees in the family situations observe MahaShivratri as his wedding day. Those with worldly ambitions see it as a day when Shiva conquered all his enemies. The Rishis and yogis see it as the day when he became one with Mount Kailasha with absolute stillness.

Shivratri usually falls on the fourteenth day of every lunar month; basically a day before the new moon is observed as Shivratri. MahaShivratri falls between February and March among the twelve Shivratris of a calendar year and carries the most spiritual significance.  This is the day when nature is pushing one towards one’s spiritual peak. In order to have the most of these natural upsurges of energies, one of the fundamentals of this nightlong festival, is to ensure that you remain awake throughout the night mostly in a yogic pose.

There are many narratives as to the origin of MahaShivratri.  Some legends attribute it to the night when Shiva performs the cosmic dance of Shristi – creation, Stithi – preservation or sustenance and Samhara – destruction or dissolution while others accredit it to the night when Shiva and Parvati were united in holy matrimony while some epics memorialize the MahaShivratri festivities to the day when the omnipotent Shiva saved the world by consuming the Halahala vish – the deadly poison, one of the elements liberated during Samudra-Manthan – the great churning of the ocean, a joint undertaking of the Suras (the Gods) and Asuras (Demons), in order to obtain Amrit – the nectar of immortality (the philosophical essence of the above myth is as follows: Gods and demons symbolize all kinds of individuals, both good and bad, in the world. The Ocean of Milk represents the ideal world that is full of peace and happiness for all human beings. Churning the Ocean of Milk signifies the human activity in the world. The amrita symbolizes happiness and the poison represents human greed and selfishness. Shiva symbolizes the atman (self), the spiritual essence of an individual.), and there are many more such chronicles.

According to the Kashmiri lore, Herath commemorates the manifestation of the great Jwala Linga or the pillar of light, which appeared on triyodashi, a day before MahaShivratri day.  The story goes like this – Goddess Parvati along with the yoginis was meditating in the forest.  Meanwhile Lord Shiva, who was searching for his divine consort Shakti, appeared in the form of a Flaming Linga, at Pradosh Kaal or the dusk of the early night in the form of a Swacchand Bhairava – a fearsome form of Shiv.  This frightened the yoginis who started running
helter-skelter.  In order to take control of the situation, Mata Parvati created Vatuka Bhairava and Rama Bhairava, her mind-born sons, to pacify the Lord who subsequently disappeared.  After a moment of tranquil, Swacchand Bhairava appeared again as a dazzling column of fire or the Jwala Linga.  Vatuka and Rama approached it to locate its emergence and termination, but were unsuccessful.  They began to sing praises of Lord Shiva and went to Mata Parvati.  Unable to comprehend the illustriousness of Shiva, Vatuka and Rama and the yoginis merged with Goddess Parvati who in turn merged with the Jwala Linga.  She then blessed both the Bhairavas – Vatuka and Ramana that they would be worshipped by human beings and would receive their share of sacrificial offerings on that day and those who would worship them would have all their wishes fulfilled.  MahaShivratri festival is celebrated across Bharat and other countries like Nepal on Chaturdashi – the fourteenth day of the Krishna Paksha of the month of Phalgun (February/March), but in Kashmiri it is celebrated a day earlier, i.e., trayodashi, the thirteenth day of Krishna Paksha of the month of Phalgun.  In fact, to be more precise, it is a fortnight-long fiesta pinnacling on trayodashi, the day of appearance of the Jwala Linga.

The 9th century Kashmiri saint-poet Utpaldeva describing Shiva-ratri wrote, “When the sun, the moon and all the other stars set at the same time, there arises the radiant night of Shiva spreading a splendor of its own.”

No amount of exposition about the customs, rituals, traditions and practices prevalent in the Kashmiri Pandit Community is complete without the mention of MahaShivratri, better known as Herath, coined from the original word Hararatri – The Night of ‘Hara’, another name for ‘Shiva.’  Herath is in fact the paramount festival of this community.

The commencement, progression and culmination of Herath unfolds in the following way:

Herath Truvah – Herath Truvah or the thirteenth day is the day which marks the zenith of all celebrations.  This is the day of main pooja.  It is important to mention that until the migration in the 1990s, the whole Kashmiri Pandit community usually lived in a joint family system.  It was not unusual to find a single household consisting of as many as 20 to 30 members and some even more.  The eldest member of the family would keep fast.  This day symbolizes the wedding of Shiva and Parvati and it is believed that the Bhairavas and other Ganas accompany Shiva.  Special dishes are prepared for them in order to please them.  This is what constitutes the vatuk pooja, better known as Vatuk Pooza in local parlance. 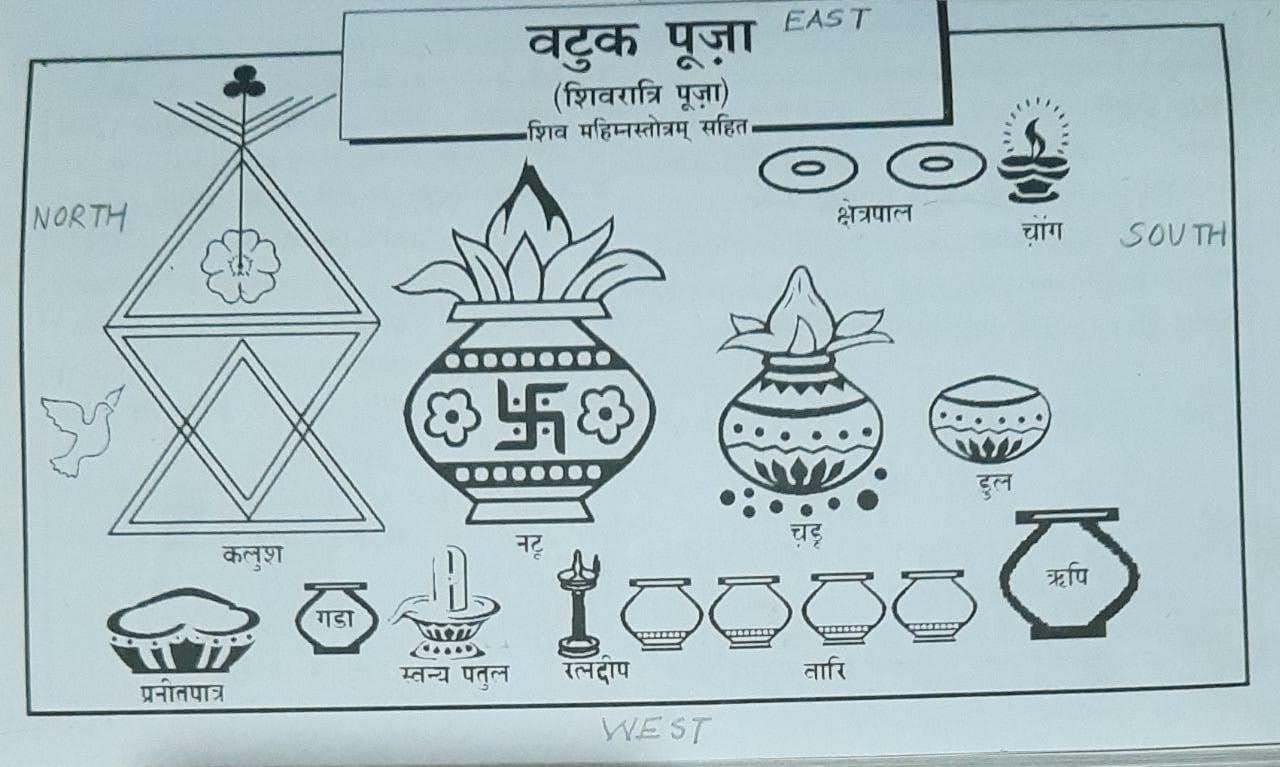 The picture above depicts the layout of the Vatuk Pooza.  The Pooza begins with Kalasha Sthapana or placing of the Kalasha.  The area is cleaned thoroughly and prepped using lime and Kalasha is placed in the area designated by the flower in the picture.  Next No’t representing Lord Shiva and Chou’d representing Mata Parvati are placed.  Saniwaer, dul (for placing food for Bhairavas), So’nni Potul, Dooph’zuur or Ratandeep, and Hrishdul (for placing food for the Hrishis) are placed in the order designated in the figure above.  Nariwan and garlands are tied around these articles.  The Kalasha, No’t, Chou’d, Saniwaer are filled with doon or walnuts (every family has pre-decided number of walnuts to be placed, but usually it is not less than 51 for the No’t.)  Other items that go in are milk, curd, Kand (crystalline sugar in the shape of Shiva Linga), rice, flowers etc.  Now an elaborate Vatuk Pooza is undertaken under the auspices of a Kul purohit or family priest, whereby Shiva and Parvati are united in holy matrimony.  It is interesting to note that since migration, many audio cassettes and later online audio links containing instructions on rituals along with mantras are available to enable the new age Kashmiri Pandits settled in different places to stay close to their culture without compromise.  After the Pooza, The Bhairavas are fed their choicest delicacies, usually consisting of meat and fish accompanied with rice, another ritual very specific to the Hindus of Kashmir.  The family then sits down together and enjoys the meals. 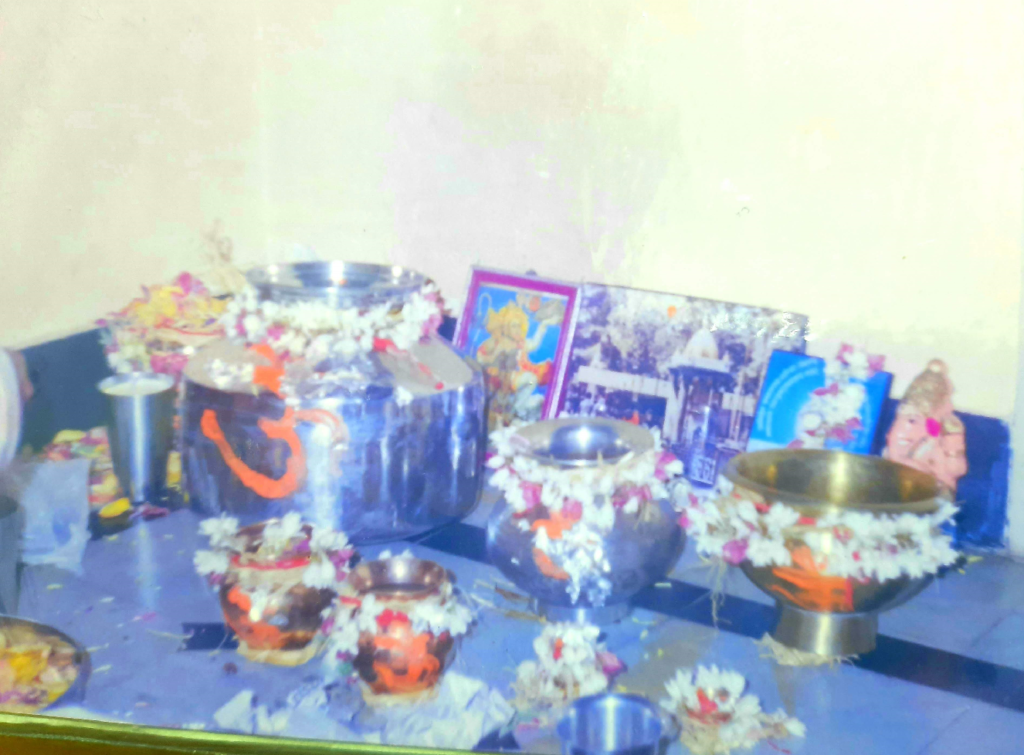 It is interesting to note how beautifully our lives, rituals, customs, traditions and festivals are interwoven and totally in sync with the seasonal cycle.  Earlier it was mentioned that the festivities last a fortnight, but in reality Shivratri from its outset to conclusion is a conviviality lasting 23 days.  Imagine the 23 days of gaiety, celebrations and the Kashmiri pandits chanting their favourite mahimnapar strotam:

O’ one with the complexion as bright and divine as a lighted camphor, embodiment of compassion, quintessence of all worldly existence, adorning the venous snakes as ornaments, I bow down to the lotus feet of my Lord Shiva and Mata Bhavani who dwell in the inner kernels of my heart.

The turbulent times of 1990 threw the Kashmiri Pandits out of their beloved land but could never uproot them from their traditions, customs and more importantly their way of life.  Even today they are easily recognized in any part of the world.  The spirit of Shiva lives in them wherever they are and I would like to end this piece with an anecdote repeatedly narrated, year by year, by the elders to the youngsters of the community that goes as follows:  During the Afghan rule, Jabbar Khan, the governor forbade the Pandits against celebrating Herath on the designated date of triyodashi of the dark phase of moon of the month of Phalguna because someone told Jabbar Khan that the Pandits believed that it was imperative to snow on the night of Herath.  Instead he suggested that they should celebrate Herath in June, which is summer.  But as divinity would have it, due to the amalgamation of extraordinary forces of nature, not only did the snow descended from the heavenly sky but also formed a thick white sheet on the ground on this night too.  The Hindus of Kashmiri believed that their supreme deity, the benevolent Lord Shiva or Hara made the impossible possible and blessed them with his mercy.  The rhymesters soon got to work and created a new song, “Wuchton yih Jabbar, jandah, Haras tih karun wanda” (“Look at Jabbar, the wretch, even Har he turned into winter!”)  It is interesting to note that the Afghan rule in Kashmir soon came to an end after this!!

Herath Mubarak to all!

Rekha Dhar holds an honors degree in Engineering from the University of Mumbai. She has deep interest in Indian philosophies, indigenous Indic traditions and valueRead more