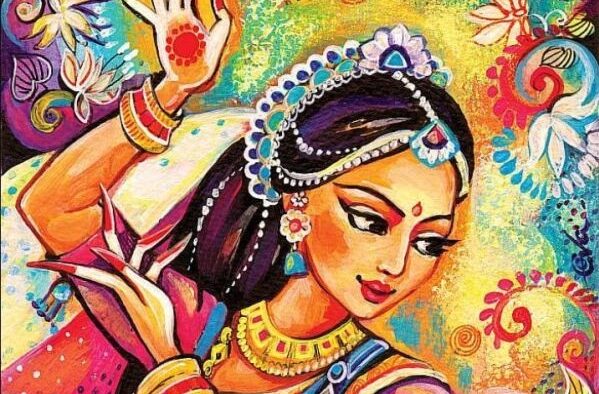 Apsaras have been tributaries of the ever flowing Vedic scriptures. Some excelled in performing the most complicated tasks of alluring righteous humans while some got attracted towards the humans. The weave of the supernatural and the natural kept them interwoven in the threads of Puranic literature. Each of these celestial Apsaras is praiseworthy and empowered; at the same time modest and significant in the weave of Puranic scriptures.

Of the many Puranic celestial maidens, Apsara Alambuṣā has an important role in Hindu scriptures for laying the foundation of the Kingdom of Vishala and also in the birth of Kubera- the God of Wealth. She was also the mother of Ilabilā, who was born to her and King Tṛṇabindu. Her daughter Ilabilā was married to Viśravas, and gave birth to the God of Wealth – Kubera. Apsara Alambuṣā and King Tṛṇabindu also had three sons-  Viśāla, Śūnyabandhu and Dhūmraketu. Prince Viśāla who founded the Viśāla Dynasty and Viśāli city .

Meaning– He who is the seat of all creditable traits, King Tṛṇabindu was honoured by Alambuṣā as his consort . Iḍaviḍā their daughter was given in marriage to Visravas and to them was born Dhanada -Kubera. His father who was a great sage who taught him everything. Three sons Viśāla, Śunyabandhu and Dhūmraketu, were also born to them. Viśāla who was the founder of the Dynasty and built a city called Vaiśāli.

As Indra’s Charioteer, Mātalī navigated the chariot through the clouds, King Sahasrānīka maintained silence. He was deeply engrossed in the thoughts of  beautiful Mṛgāvatī. He absolutely ignored the presence of Apsara Tilotammā who was accompanying him all through the journey. Feeling offended and neglected by King Sahasrānīka’s indifferent behavior, Apsara Tilotammā cursed him. She declared that he would remain separated from whatever or whomever he had been thinking of all the while when in her company. This separation would be for fourteen years.  King Sahasrānīka was so deeply engrossed in the thoughts of Mṛgāvatī that Apsara Tilotammā’s curse went unheard by him.

King Sahasrānīka reached his capital, Kaushambi and thereafter married princess Mṛgāvatī. They were deeply in love with each other. Consequently Mṛgāvatī became pregnant and one fine day Mṛgāvatī expressed a desire to soak in a pool of blood. King Sahasrānīka built a pool of Lakshadi Rasa which looked similar to blood. While Mṛgāvatī was bathing in it, an eagle carried her away. King Sahasrānīka fell unconscious on viewing Mṛgāvatī being carried away by the eagle.

Meanwhile the eagle left Mṛgāvatī on top of the Udaya Mountain. The queen realized her hapless situation and cried aloud. Just then a large snake appeared and tried to gulp her down. Suddenly a Divine interference occurred that saved her from the snake and vanished. She was saddened by her plight and attempted to end her life. A young Rishi saw her and approached her. After understanding her situation, he consoled her and took her to the Rishi Jamadagni’s Ashram .

The snake after being released revealed to Udayana that he was Vasumeni, Vasuki’s elder brother. Vasumeni conveyed his obligation to Udayana for getting him released from captivity. Thereafter Vasumeni gifted Udayana with a veena. He also shared with him the mantras to obtain a garland that would never wither. He also helped him get a symbol on the forehead that would never fade.

The tale of Apsara Alambuṣā has all the ingredients of a magnificent adventure with curves, twists, sorrow and happiness. The story of Alambuṣā cautiously puts together a curse, an escape, some bliss, a long separation and finally a happy ending. It is an echo of the fact that what is destined happens, no matter what. The reason may be a fault, annoyance, a curse or a bit of a blemish beyond belief. The consequences may be good or bad, but hope is the last thing ever lost.