Why All Religions Are Not The Same – Part 5 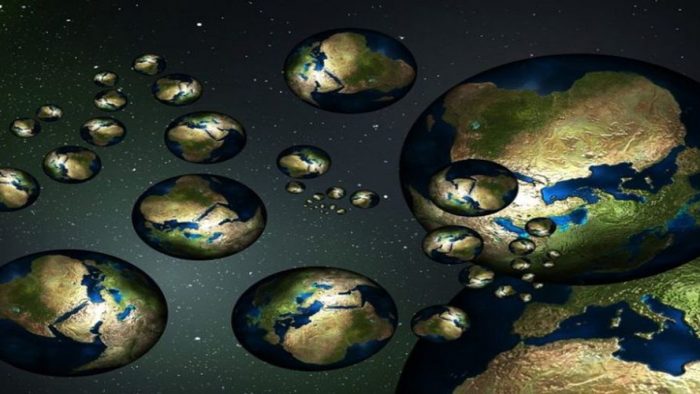 Cosmology is that part of a Religion, or of a Spiritual system like the Eastern Oṃkāra Dharmas, which defines its view of the Universe and the way human beings interact with it. Hindu Cosmology derives its view from its concepts of Kāla, or Time, and the way it rationalizes it through use of Logic. Logic as a function of culture is an important determinant of the way a culture, and a Religion as a product of that culture, uses its collective intellect to rationalise the transcendent and immanent through use of perceptions and reasoning.

Abhijit Chavda, a scientist friend, who has been researching theoretical physics for over 20 years, had this to say on Hindu Cosmology: ‘From my ~20 years of study and research and calculations in theoretical physics and cosmology (based on several factors, primarily the inter-relationship between dark matter and dark energy and how the latter drives the universe’s expansion), I firmly believe that the cyclical model of the universe is the most probable: an expanding singularity (the big bang), an expanding universe (what we currently observe), equilibrium, a contracting universe, and a singularity again. And then, the next cycle. Needless to say, this is what Hindu cosmology talks about. Hindu cosmology is the only system of cosmology whose vast time scales are comparable to those of physical cosmology.’

Dr. CK Raju makes a modification to the singularity-exapnsion-contraction-singularity cycle. He considers the Friedmann cyclical model inappropriate for the Hindu Cosmology. Instead he uses the quasi-cyclical Time, like the lines on a record, so that Time does not flow in a straight line, nor does it loop on itself, but instead tilts — the ‘tilt in the arrow of Time. However, this is too much of Pure Science for a lay reader.

So, the Hindu Cosmology is an eternal cycle/quasi-cycle with a scheme of accountability for all living beings — humans, animals and plants, with a reflection of Universal Consciousness in every being — living and non-living. Divine is immanent in all, and it is possible for the highest in evolution cycle — the human being — to transcend the cycle of karma-saṃskāra and achieve liberation. One of the best concepts is provided in the Saṃkhya system, where the Purusha is the Cosmic Consciousnes — the Chit. Modifications in Chit produce the Individual Consciousness — the Chitta — called Prakriti. Prakriti is transcended by the Chitta with the help of ordinary pramāṇas available to the intellect. Samādhi is the ultimate experience and is also the ultimate pramāṇa at the level of Purusha. Samadhi is the Union of Yōga Sutras, and Ānanda or Chidānanda of Vedānta. Theory of Creationism does not apply at all. Divine and Man are interchangeable at one level. This is applicable across Multiverse, and just not the one Universe that we can perceive through our ordinary senses.

The Vedānta verse of Nirvāna Shatakam by Ādi Shankara is a perfect illustration:

Please note the different use of ‘chitta’ and ‘chit’ — similar to the use of Purusha and Prakriti in Sāṃkhya.

The Cosmos finds a reflection in the human brain. That is why the different cognition points in the brain are revered as devatās.

This view of the Universe and Multiverse is totally different in other Religions, including in Zoroastrianism. In the Abrahamic Religions, the common factor is the concept of Creationism, and an all powerful God/Yahveh/Allah who sits outside the Universe and creates it for the enjoyment of the human beings alone. They have their different reasons for creating this Universe, and they command their followers to regard their version as the only and Exclusive Truth. All of them are based on a revealed Book, which must be followed implicitly, on the pain of punishment. Quite logically, they have to follow the 2-value Logic of true/false variety. Whatever the Book certifies as true is true, and whatever the Book says is false, is false. Time must necessarily flow in a straight line, and lead to the eschatology of another binary called heaven and hell. As for the scheme of Evidence in an epistemological sense, there is no proof required against the Word of the Book. The Word is the only Truth. The Word is the only Proof.

This has resulted in quite absurd scenarios in the past. It also explains the orgies of library burnings witnessed in Alexandria, Takshashilā and Nālandā. Bakhtiar Khilji, on being confronted by the huge wealth of books in Nālandā appears to have remarked, ‘If there is anything useful in this world, it is contained in the Qur’an. If it is not there in the Qur’an, it is not useful. So either way, these books are not required.’ The burning of the library of Alexandria also had similar, if not exactly the same, sentiments behind it. The Church had acquired political power, and established a dogma which was required to consolidate its newly acquired political power with the religious power which it already possessed. The pagan world was an open world with many belief-systems coexisting. The pagans believed in cyclical Time, and migration of the soul. This did not suit the Church, as Christ could not be born again and again across what it termed as ‘Eternal Recurrence’, and be made to suffer the Cross again and again. It would be totally against the character of ‘Son of God’ bestowed upon him by the Church after the First Nicaean Ecumenical Council in 323 CE. Church had to have the power over the humans in order to save them on behalf of Christ. So the concept of eternal heaven and hell in an eternally flowing straight line of superlinear time became necessary. It necessitated burning down of all pagan knowledge, and destruction of all pagan symbols. One would see the same puritanical zeal among the Evangelicals even today.

I remember a very recent example. An Islamic scholar produced evidence from Shari’a that the Peshawar attack on the Army Public School, Peshawar was carried out by India. It was a gathering of well-informed people, who possessed the empirical evidence on the attack. Yet, not one of them could get up and point out the absurdity, as empirical evidence has no value in front of the scriptural evidence in Islam.

The foregoing analysis and cited examples would show that Abrahamic Religions subscribe to a World View, whereas Hinduism espouses a Cosmic View

Hindu Cosmology permits an open architecture of spiritual seeking and spiritual belief, whereas the Abrahamic Religions do not permit any such liberty. From this exclusivism to the exclusivist hate for the non-believer, and violence in the name of blasphemy, apostasy, idolatry, and non-conformity is but a logical flow of the doctrine. Please note that we are discussing only the doctrinal aspects of the religions, and not their behavioural distortions.