Why All Religions Are Not The Same – Part 3 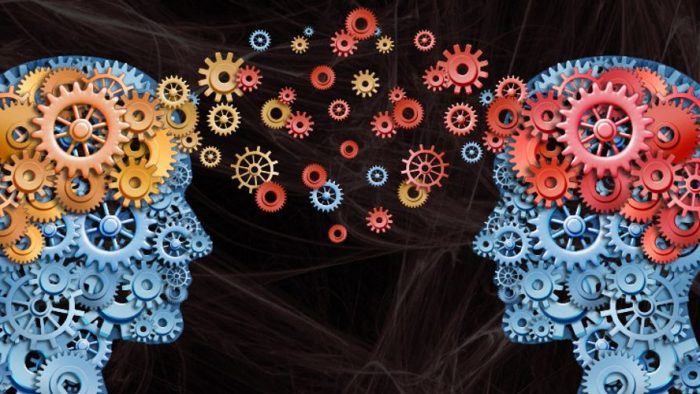 The assertion that Hinduism is different from the Middle Eastern religions of the Book is further fortified by the different ways in which they approach logic.

All Middle Eastern religions follow the Greek system of logic, where any physical phenomenon is viewed only in shades of black and white. Called two-valued logic, the logic recognizes only two states of any phenomenon — true or false. When aligned to the superlinear Time adopted by the post-Augustinian Church, it creates a strong dialectical system of binaries, where Truth is what is ordained from the above, and everything else is False. So the culture of violence that condemns the sinner, or curses a concept (like the concept of cyclical Time by the Church, or the concept of Trinity, or multiple manifestations by Islam), the consequences of heresy or haram visited upon the dissenters are easily justified.

The two-valued logic has had other consequences too. The Indian gaṇita (system of calculation) was adopted by the West in the Middle Ages as Mathematics, and devised a system of formal mathematics based on proofs. These proofs were products of the two-valued logic, recognising only deductive proof, resulting in such farcical proofs as Russell proving 2+2=4 in 378 pages. The Newtonian Science also adopted this two-valued logic along with superlinear Time, producing a mechanistic view of Science, which is still being undone. (Please refer to ‘Cultural Foundation of Mathematics’ by Dr. CK Raju).

The Indian Systems have always followed a multi-valued logic, beginning with the Vedas, which prescribed Chatushkoṭi, or the ‘four-valued logic’. (The Nāsadiya Sūkta cited in Part 1 is a good example, and Patanjali and Pāṇini use it extensively). The four values of this system of logic are ‘True’, ‘False’, ‘Both True and False’, and ‘Neither True Nor False’. Combine this with cyclical Time, and it should be very clear to all that we can then have a very open architecture for debate. It is exactly this kind of debate that we find in the Upanishads. This extends to all other systems of Indian thought, culminating in the orthodox Nyāya system, and going to the extremes of seven-valued (saptabhaṅga) and eight-valued logic of some Buddhist and Jain philosophers. The scholar of Mahabharata and Ramayana chronology, Nilesh Neelakantha Oak summarises it in this quadrant: 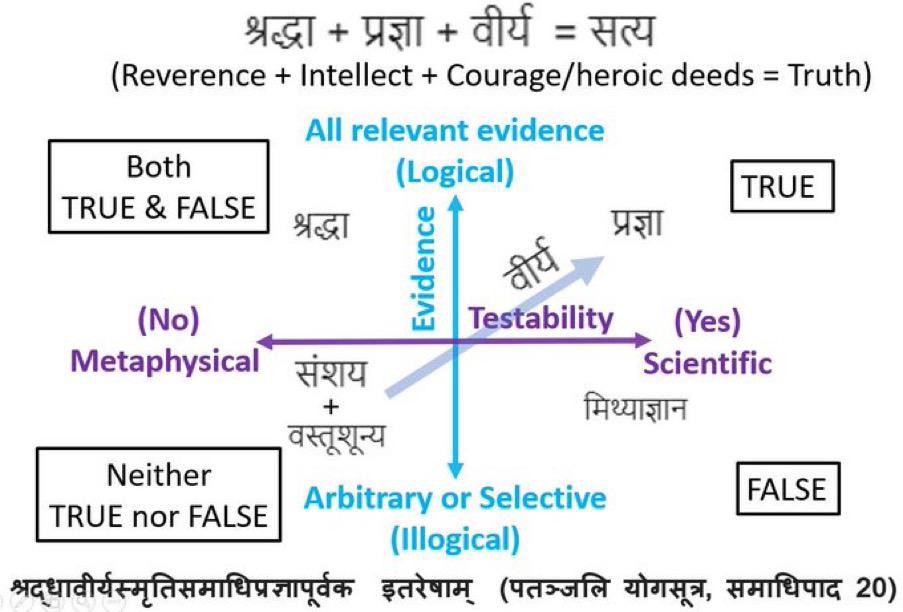 In the words of Dr. Subhash Kak, ‘Logic is one of the six darśanas, which are the classical schools of Indian philosophy. These six schools are the different complementary perspectives on reality, which may be visualised as the views from the six walls of a cube within which the subject is enclosed. The base is the broad system of the tradition (Purva Mimāṃsa), and the ceiling represents the large questions of meaning related to the objective world and the subject (Uttara Mimāṃsa or Vedānta); one side is analysis of linguistic particles (Nyāya), with the opposite side being the analysis of material particles (Vaiśeśika); another side is enumerative categories in evolution at the cosmic and individual levels (Sāṃkhya), with the opposite side representing the synthesis of the material and cognitive systems in the experiencing individual (Yōga).’

The core philosophies of Hinduism like Ātman and Moksha depend upon inner seeking, and concepts of immanence and transcendence of the Self. Sat, Chit and Ananda are the three facets of the Cosmic Truth, with many more variations appearing within the different systems. ‘Ekam sadviprā bahudhā vadanti’, or many paths lead to the same Truth is possible only with a many-valued logic. There is no room for binaries in Hinduism as it is fundamentally a spiritual path through consciousness — described as Chitta (Self-Consciousness or Awareness), and Chita (Universal Consciousness) — which necessarily requires exploration in different spaces of logic. It is, therefore, a necessary concomitant to the concept of cyclical Time.

Even though Christianity also began with a challenge to Judaism, and tall philosophers like Origen subscribed to not only cyclical Time, but also to the non-binary logic, this underwent a change with the wedding of Church with State power, and the Augustinian notion of superlinear Time meant that logic too had to be reduced to a binary, or two-valued logic in order to deify the concepts of true God vs. false gods, piety vs. sin, believer vs. unbeliever, or simply heaven vs. hell. There is no room for a grey area in this concept of what was also sought to be entrenched as Pure Reason. So the post-Nicene (after the First Ecumenical Council of Nicaea) Christianity beginning from Constantine, and more particularly from Justinian to Newton, and right up to Bertrand Russell simply promoted two-valued logic. It is, therefore, no surprise at all that Marxism became the apotheosis of this two-valued logic, pitting capital and labour against each other. Islam simply got stuck to this two-valued logic of belief vs. unbelief from the time of Ibn Taymaiah — the beginning of the dark age of Islam.

It means ‘Those who have seen the Truth have concluded that of the non-existent (the material body), there is no endurance; and of the eternal (the Ātman), there is no change. They have reached this conclusion by studying the nature of both.’

The advent of quantum mechanics, and quantum logic is the final tribute of Science to the three-valued logic system of the Hindus. Heisenberg’s Uncertainty Principle, and Schrodinger’s simultaneously dead and alive cat are examples of three-valued logic — clear, not clear and indeterminate.

Another form of multi-valued logic is also seen in the field of computing. To quote Dr. CK Raju, ‘one can construct a more realistic desktop model involving parallel computing, although understanding this requires a little more technical knowledge. In parallel computing, a single process executing on parallel processors may be in multiple states at a “single instant” of time. Needless to say, “parallel” is a bit of a misnomer, since it is an essential feature of parallel computing that the processors (logical worlds, in the Wittgensteinian sense) and processes communicate with each other, and that they branch and collapse. Time, so to say acquires a structure, and it is necessary to take into account this structure to understand the semantics of formal parallel computing languages. Microphysical closed time loops enable us to understand how an atom of time can nevertheless have a structure, in the sense that multiple logical worlds are attached to a single instant of time.’

One can simply contrast the Boolean Logic and Fuzzy Logic of the computation systems as a rough guide to the value of Logic in computers.

Everyone would remember the famous Indian story of the elephant being described by ten blind men. The multi-valued logic of Hinduism and other Oṃkāra religions, which may be more appropriately called as spiritual systems, is the defining feature of Hinduism.

To summarize, logic varies with culture: the 2-valued logic, assumed a priori in the West and integral to Ahl-e-Kitab (of the Book) Religions, is not universal. The Indian culture, of which Hinduism is the defining example has never subscribed to 2-valued logic, and this is also reflected in the way Indians did their Science and Mathematics.