Advanced Archery in the Age of the Mahabharata 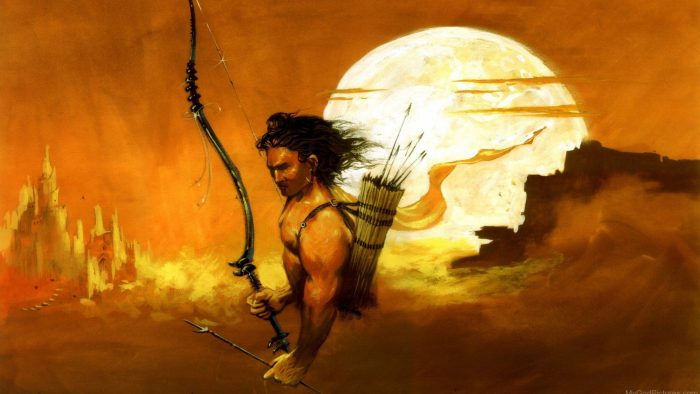 Archery dominated the war scenario in Dwapara yuga. The Mahabharata era presented archery in its full glory. Reputed teachers such as Parasurama, Agnivesha, and Drona elevated archery to the highest level and trained their students to become outstanding archers.

Drona’s contribution to archery placed him at the top as the best preceptor of the time. He molded all the princes of Aryavarth into accomplished archers. It was Drona who made Arjuna the archer par excellence.

Archery was one of the prime warfare skills during the Mahabharata period. The most renowned and respected warriors were all bowmen. Arrowheads were made of iron, and shafts were made of reed and bamboo.

With a fine bow, an arrow could attain a speed of about 80 m/s and could kill an enemy at a distance of 180 m.or even more. Ardha Chandra shaped like the crescent of the moon, naracha, vipata and the like are different kinds of arrows used in those times.

Types and Modes of Archery

A proficient archer needed to learn all these in detail. Other than that, there are five vidhis of archery referred to in Vana Parva by Indra when Arjuna visited heaven: discharge, withdrawal, re-discharge and re-withdrawal, and the Prayaschitta.

These are the five modes of archery learned by Arjuna. (III.167). The first three were known to all archers in general. The last two were learned by Arjuna during his training under Shiva and other gods and the last one enables the archer to restore the lives of people, killed by fault.

So we can count all five in advanced archery methods though they were not necessarily implemented. Indra used Prayaschitta Vidhi to bring back or revive the lives of the Gandharvas killed by Arjuna during the Ghoshayatra war.

Parasurama described various arrows that cause disaster, which Arjuna knew well (V.96). According to him, kakudika, suka, naka, akshisantarjana, santana, nartana, ghora, and asyamodaka, if placed on the string of the best of bows called Gandiva, men sacrificed or gave up their lives.

Indeed, these weapons have other means corresponding with eight passions, such as lust, wrath, covetousness, vanity, insolence, pride, malice, and selfishness. Struck with them, men are confounded and move about frantically deprived of their senses. Under their influence, people tend to sleep heavily, cut capers, vomit, pass urine and excreta, weep, and laugh incessantly.

Arjuna was the most acclaimed archer of the time with an almost hundred percent or perfect success ratio. Here are the moments that can be counted where he exhibited advanced archery skills to count upon.

1. The target in Draupadi Swayamvar itself was a mind-blowing construction on the part of Drupada. The machine was set up and high above the target was also fixed. The archer should shoot the target through the machine.

2. The cluster of arrows that covered Khandav Van did not let even one raindrop reach the fire below.

3. Even in the gurukul, Drona trained Arjuna to hit a single target with multiple arrows and many targets with a single arrow.

4. Shooting five hundred or more arrows at one go.

5. Shooting the target which is not seen assuming the distance, and by the placement of the arrow. Arjuna struck Jayadhrstha’s chariot horses when he abducted Draupadi and was already far away….not within eye range.

6. Using the Sabdavedhi technique to fight with a rival who would not be seen due to illusion. Arjuna fought with Chitrasena Gandharva and broke his illusion.

7. Shooting arrows from the running chariot two miles behind and ahead. Drona validated this fact to Duryodhana. He gave this as the reason for his inability to stop Arjuna from breaking Suchi Sakata vyuha.

8. Not letting Jayadhratha’s head fall, keeping it in the sky with a chain of arrows.

10. Cut the sword hand of Bhurisravas who was about to kill Satyaki when they fought at a distance. The hand was cut but it did not harm Satyaki. The aim was perfect.

The astras played a pivotal role. An excellent archer with exceptional technique would reach the heights of glory if he possessed devastating astras. He could create a pool, extract water from the ground, and use a grass blade or fire torch to smash rivals with the power of mantras. Nothing was impossible for archers with superior astras.

Archers Motivated the Outcome of War

They achieved success with the bow by their feats. Ekalavya tried to excel in archery. Arjuna took archery to the next level by shooting with both hands and by learning to shoot the targets in the darkness.

In the Kurukshetra war, all the chief commanders of the Kaurava army Bhishma, Drona, and Karna were acclaimed archers. Though other weapons like maces, swords, lances, and scimitars were used, bows reigned supreme in the hands of Maharadhis like Arjuna, Karna, Bhishma, Satyaki, Drona, and Abhimanyu.

Hundreds of arrows were shot at one go. Distance did not count as arrows traveled fast and struck the targets within minutes. Archery prevailed over other weapons and won the wars for bow wielders.

Dhanurveda: The Veda of Archery

The two great epics of India, the Ramayana, and the Mahabharata dealt extensively with the science of archery since the main heroes of the epics were the most celebrated archers of their time, who had phenomenal success with the bow. Arrows danced to the rhythm of their fingers and astras submitted before them in embodied form.