The Five Indras and Swarga Lakshmi: The Secret of the Origin of Pandavas and Panchali 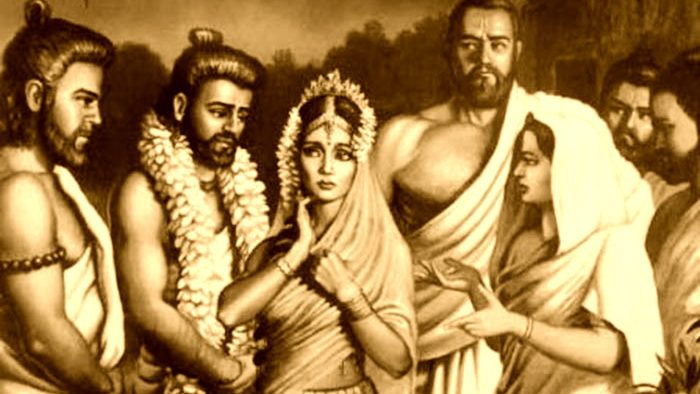 One of the most significant features of Mahabharata that often tends to amaze the readers is Draupadi’s polyandrous marriage with the five Pandava brothers. Undoubtedly this is the ever-burning topic of discussion till date. While Draupadi was much looked down on, for having married the five Pandava brothers by those who regard her marriage to all of them simultaneously as sinful, our epic sincerely tries to prove it otherwise.

The intricate web of polyandry that Draupadi is struck in, is her destiny. Hence there is no reason to find fault with her, her husbands, or her marriage to them. Despite her unusual marriage, Draupadi is regarded as one of the five great Kanyas of the past. This is an attempt to present the way in which Vyasa Bharat and Puranas have explained the secret of the births of Panchali and Pandavas, that ultimately resulted in such an unconventional marriage.

Vyasa’s narration of the story of the Five Indras:

It is a well-known fact that Indras change after every kalpa. Our current story deals with the previous Indras: Viswabhuk, Bhutadhama, Shivi, Shanti, and the Indra of the present kalpa Shakra, who were ordained to be born on earth as the five Pandava brothers. Sachi Devi, the Swarga Lakshmi incarnates on earth as their common spouse Draupadi.

The story that Vyasa narrates: Shakra (the present Indra) is wonderstruck. He is gazing at the golden lotus that is dancing on the waters of river Bhagirathi. Spellbound he follows its track and reaches a spot where he finds more such lotuses.

What surprises him the most is the beautiful maiden who is shedding tears. To his amazement, as soon as a teardrop falls into the water, it becomes a golden lotus! Shakra approaches her. “Why are you crying O beautiful lady? May I know the reason?” He questions her with great concern. The lady in distress says, “I will answer all your questions if you follow me.Then you will know the reason for my sorrow.”

He follows her to the Himalayas. The peaks of Himavat mountain look beautiful not with snow but with a couple who embellish the surroundings with their bodily luster. They look relaxed playing a game of dice, sitting on a spacious throne. Seeing them Shakra feels insulted as they do not even bother to acknowledge his presence. How can they ignore him, he who is the king of celestials? He is irritated.

The handsome youth with a complexion that matches white camphor glances sideways at Shakra and continues his game. His beautiful partner smiles at him after making her move. Meanwhile, the lady in distress stands stoic, still shedding tears. Shakra cannot bear it any longer and thunders at the young resplendent man, “Don’t you know who I am? I am Shakra, the present Indra. This whole universe is under my rule”. The camphor tinted man smiles indifferently.

And then, he glances at Shakra in all seriousness. Shakra is struck by the amazing power of those eyes. He can not move his limbs. He stands paralyzed in his spot. The lady in distress sobs and chants. Om Namah Shivaya! Om Namah Shivaya! The young couple disappears. In their place are Sadashiv and Ambika, spreading luster all around.

Sadashiv showers his benevolent grace on the beautiful distressed lady, nodding with assurance. Ambika too gets up and places her hand on Shiv’s shoulder from behind. Sadashiv asks the lady to bring Shakra along with her into the caves that look as though they are hiding many secrets inside. He says to himself, “I will deal with his (Indra’s) pride. He needs to be taught a lesson.”

Shakra realizing a bit late that he was cursing none other than Sadashiv himself, regrets his negative thoughts and admits to his fault. He pleads with the three-eyed lord. “Forgive me Oh! Mahadev.” Despite this apology, he is unable to move his limbs and is frozen. The beautiful distressed lady approaches him, and offers her hand, to help him get up.

No sooner does she do this that Shakra, the chief of celestials, falls down. Somehow she manages to help him stand up on his own. She finally manages to lead him to Sadashiv’s cave. The illustrious Ishan of fierce energy then says, “Act not O Shakra ever again in this way. Remove this huge stone, if your strength and energy are as immeasurable as you think. Do that first and then get inside.”

Sakra on removing the stone as instructed finds four others resembling himself behind it! He recognizes them. They are the previous Indras. Viswabhuk, Bhutadhama, Shivi, and Shanti. They look grief-stricken and miserable. They are captives here, held by Sadashiv! They had also faltered like him and were thrown into the caves.

Beholding their plight, Shakra becomes agitated and exclaims, “Is this to be my fate too?” The Supreme God replies, “Enter this cave without delay, for you have with your pride insulted me.” Thus addressed by Sadashiv himself, the chief of the celestials trembles like the wind-shaken leaf of a Himalayan fig with limbs weakened by fear.

Shakra, who is the present-day Indra, shaking from head to foot, addresses the three-eyed lord with joined hands. “O Bhava, shower me with your grace, and please pardon me.” Hearing these words, the god of fiery energy smiles and says “You have to endure the punishment. Along with those four previous Indras, you have to take birth on earth. Sadashiv continues, “The fate of all of you shall be the same. All of you shall have to take birth in the world of men, where, having achieved many difficult feats, you shall return to your heavenly abode.”

Hearing this proclamation the previous Indras say, “We shall act as per your word O Bhava. But please let the god’s Dharma, Vayu, Maghavat, and the twin Ashwins, beget us through our would-be mother. Fighting with men by means both celestial and human, we shall again come back to heaven.”

Hearing these words of the former Indras, Shakra once more addresses that foremost of gods, Sadashiv, “Instead of going myself, I shall, with a portion of my energy, create from myself a person for the accomplishment of the task to form the fifth among these.” The lady in distress with extraordinary beauty is Swarga Lakshmi, Sachi. Shakra is not able to recognize her due to Shiv’s illusion.

This is the divine plan set by Shiv, where Narayan will be born as Krishna and shall establish dharma on earth. He will befriend Nara Maharshi born as Arjuna, and lighten the burden of the earth, assisted by him.

Who is Arjuna? Is he Nara? Or is he Indransh? Adivanshavatarana Parva Of Mahabharat clarifies the fact:

Nara, whose companion is Narayana, will be born as Indra’s son and indeed, will be known as Arjuna, the mighty son of Pandu. So Arjuna is Nara Maharshi indeed born through Indra, with Indra tej to Kunti, as her third son. Markandeya Puran tells the story elaborately, in a different way, although the essence is the same. As per that version, Indratej gets transferred through Dharma, Vayu and Ashwins to Kunti’s womb.

It happens thus: Shakra, the present Indra, has killed Trishiras, a brahmin, the son of Twashta, out of fear of his deep penance. Due to this sinful act, he lost one part of his energy which is now transferred to Dharma. Twashta, the father of Trishiras gets angry, and creates a demon Vritra by burning his hair. Vritrasur is invincible, so Shakra enters into an agreement of truce, but kills Vritra by cheating.

Due to this second sinful act, Shakra loses yet another part of his energy that enters the air and gets deposited with Vayu. Now Shakra desires Ahalya and takes the form of Sage Gautama and deceives her when her husband is not at home. Due to his third sinful act with Ahalya, Shakra loses his energy once again, which enters the twin Ashwins.

Thus this Indra tejas which lies deposited in Dharma, Vayu, and Ashwins, is then eventually transferred to Kunti’s and Madri’s wombs when they are invited through Niyoga to beget sons for Pandu.

Hence Indransh is predominant in him than in others. Krishnaa Draupadi is Sachi, the wife of Shakra. She is born from fire. She is Shakra’s wife Indrani. She is the wife of the five Pandavas born with a purpose.

Adi Parva of Mahabharat says that she is Sachi Devi, the spouse of Indra. The faultless Draupadi, slender-waisted like the wasp, is born of a portion of Sachi (the queen of the celestials), in the line of Drupada. Markandeya Puran validates this by equating Draupadi with Sachi. Her adorable Indra becomes incarnate in five forms as the five Pandavas. Draupadi’s origin is now further elaborated.

Vyasa tells Drupada: Nalayani became Draupadi. Draupadi was Nalayani, wife of sage Maudgalya, who did penance after her husband attains higher worlds. Sadashiv graces her with five husbands in her next birth, as she requests for a husband not once but five times!

Veda Vyasa enlightens Drupada of Draupadi being Lakshmi incarnate. “The four arms of Vishnu, O foremost of kings, furnished with the conch, and discus are Yudhisthira, Bhima, and the twins Nakula and Sahadeva, while Arjuna is Vishnu himself, and Draupadi is Lakshmi Kamalavati”.

Five Goddesses in one Draupadi:

As per Narada Puran, and Vayu Purana, Draupadi is a composite Avatar of Goddesses Shyamala (wife of Dharma), Bharati (Wife of Vayu), Sachi (wife of Indra), and Usha (wife of Ashwins) and hence marries their earthly counterparts in the form of the five Pandavas.

As per Devi Bhagwat and Devi Mahatmya Skanda 9, Vedavati who becomes Maya Sita does penance to please Sadashiv and is incarnated as Swarga Lakshmi, who is then born as Draupadi.

Draupadi as an ansh of Kali:

As per Devi Puran or Devi Bhagwat Upapuran, Draupadi is Kali’s ansh. Interestingly, at the end of her life, she merges into Kali. Arjuna is transformed into Vishnu and ascends to heaven on the back of Garuda. Draupadi merges back into Kali, whose partial incarnation she is.

The other Pandavas reach heaven. We have all these sources that tell us so much about Draupadi’s previous births, but one thing is common in all these stories, that Draupadi is of divine origin. She incarnates to accomplish a divine purpose.

Mahabharat mostly highlights the Pandavas as the five Indras, and Draupadi as Swarga Lakshmi, although there are other interpretations also.