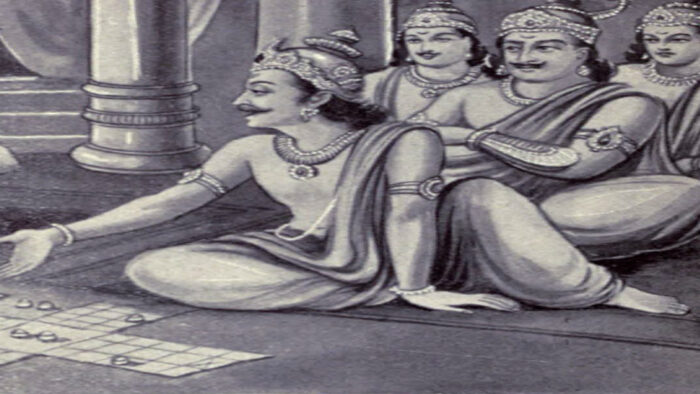 The Epic Mahabharata never presented Shakuni as a scheming villain or vily uncle who influenced Duryodhana and guided him in all his evil doings. Retelling, fiction, and TV shows created a different Shakuni altogether, projecting him as the antagonist who drove the cousins to clash at Kurukshetra.

Shakuni was one among the evil four – Duryodhana, Dussasana, Karna, and he himself. True, but he did not instigate Duryodhana at every step to create problems for Pandavas.

Here is a look into the role played by Shakuni in the lives of Kauravas in general and Duryodhana in particular.

Shakuni was not against Gandhari’s marriage to Dhritarashtra

Shakuni willingly accompanied Gandhari to Hastinapur to get her married to blind Dhritarashtra.

King Suvala at first hesitated on account of the blindness of the bridegroom, but taking into consideration the blood of the Kurus, their fame, and behavior, he gave his virtuous daughter unto Dhritarashtra and the chaste Gandhari hearing that Dhritarashtra was blind and that her parents had consented to marry her to him, from love and respect for her future husband, blindfolded her own eyes. Sakuni, the son of Suvala, bringing unto the Kurus his sister endued with youth and beauty, formally gave her away unto Dhritarashtra.

And Gandhari was received with great respect and the nuptials were celebrated with great pomp under Bhishma’s directions. And the heroic Sakuni, after having bestowed his sister along with many valuable robes, and having received Bhishma’s adorations, returned to his own city. (1.110)

Shakuni did what an adorable brother could do towards his sister. Point to be noted, he did not stay at Hastinapur permanently. He fulfilled his duty and returned to Gandhar.

No rivalry with Bhishma

Shakuni’s much-circulated revenge story against Kurus and Bhishma did not find a place in authentic Vyasa Bharat.

The dice coins used by Sakuni were not made up of ashes or bones of his father. This was a fabricated story that did not have any authentic base.

Epic did not provide any reference about the friction between Bhishma and Shakuni. There was no instance where Shakuni confronted Bhishma, the revered grandfather of Kurus or argued with him.

Similarly, there was no single interaction recorded in the Epic between Krishna and Shakuni. Not even when Krishna visited Hastinapur on peace trials.

In fact, Shakuni never dared to talk in Kurusabha when important discussions happened. It was always Bhishma, Drona and Vidura who spoke their hearts. On the other hand, it was Karna who enjoyed the freedom of speech at will. Shakuni was vocal only before his brother-in-law Dhritarashtra and Duryodhana.

Contrary to what the general perception is, Shakuni was not the mastermind behind all the plots against Pandavas. He was just a shareholder in most of the mishappenings directed at Pandavas.

Totally planned and implemented by Duryodhana to get rid of Bhima.

Duryodhana had mixed a powerful poison with a quantity of food, and got Bhima to eat it. Then Bhima under the influence of poison that spread over all his frame, lost his senses at once. Seeing this, Duryodhana bound him with chords of shrubs, and threw him into the water. (1.128)

Again Duryodhana attempted to poison Bhima but Yuyutsu warned him in time against eating the food. Still Bhima ate it and digested it because of the power of the antidote he drank in Nagalok.

“When that terrible poison intended for the destruction of Bhima failed of its effect, Duryodhana, Karna and Sakuni, without giving up their wicked design had recourse to numerous other contrivances for accomplishing the death of the Pandavas. And though every one of these contrivances was fully known to the Pandavas, yet in accordance with the advice of Vidura they suppressed their indignation. ( 1. 129)

So we don’t see Shakuni take main lead and drive Duryodhan in his attempts. He was a part of the group, one among the four who conspired against Pandavas.

Again it was Duryodhana who planned the burning of Lakshagrih at Varanavat.

Plot to attempt Pandavas burn in house made by Lach got its roots in Dhritarashtra’s heart first. The old king was perturbed by the growing popularity of Pandavas after the coronation of Yudhishtira as crown prince followed by the glorious conquests done by Arjun and Bhima. He lost mental peace and asked the council of his minister Kanika because he very well knew that Vidura will stand by dharma and Pandavas.

Vaisampayana continued, ‘On hearing that the heroic sons of Pandu endued with excess of energy had become so mighty, king Dhritarashtra became very miserable with anxiety. Then summoning unto his side Kanika, that foremost of a minister, well-versed in the science of politics and an expert in counsels the king said, ‘O best of Brahmanas, the Pandavas are daily overshadowing the earth. I am exceedingly jealous of them. Should I have peace or war with them? O Kanika, advise me truly, for I shall do as thou biddest. ( 1.142)

Kanika elaborately explained the king about the need to suppress and eliminate Pandavas who are getting stronger than Kauravas by winning the hearts of people.

Duryodhana was the alter ego of his father. Hence he too was affected by the popularity of the Pandavas and convinced his father to send the five brothers to Varanavat. The plot was conceived not by Shakuni alone, but by the prince Duryodhan in association with his partners in crime – Dussasana, Shakuni, and Karna.(1.143)

It was not Shakuni who entrusted Purochana with the construction of Lakshagrih. It was Duryodhana who did it by himself.

Shakuni did not scheme the most dreadful conspiracy of the age, but willingly participated in it for the benefit of his sister’s son. So he was not the mastermind behind the burning of Lakshagrih.

The infamous Dice game and Shakuni’s role in it

Years later, when Duryodhana got envious of the glory of Pandavas at Rajasuya sacrifice, it was Shakuni who advised him to be contented with what he possessed.

Sakuni said.–‘O Duryodhana, you should not be jealous of Yudhishthira. The sons of Pandu are enjoying what they deserve in consequence of their own good fortune. You could not destroy them by repeatedly devising numberless plans. Those tigers among men out of sheer luck escaped all those machinations. They have obtained Draupadi for wife and Drupada with his sons as also Vasudeva of great prowess as allies, capable of helping them in subjugating the whole world.

Having saved the Asura Maya from Krishna, Arjuna caused him to build that Maya Sabha. And it is for this also that commanded by Maya, those grim Rakshasas called Kinkaras supported that assembly house. What is there in this to make you sorry?” (‘2.47)

This advice of Shakuni really exhibits his inner consciousness which definitely is a noticeable trait that failed to capture the attention of the readers. Shakuni the gambler dominated Shakuni the sensible person who could distinguish between right and wrong.

Shakuni’s nephew Duryodhan did not accept his good advice and even expressed his wish to battle with his cousins, who by now became world-famous for their astounding warrior skills.

Shakuni tried his best to show the mirror to Duryodhan by speaking facts.

Sakuni replied,–‘Dhananjaya and Vasudeva, Bhimasena and Yudhishthira, Nakula and Sahadeva and Drupada with his sons–these cannot be vanquished in battle by even the celestials, for they are all great warriors wielding the largest bows, accomplished in weapons, and delighting in battle. (2.47)

Then Shakuni suggested the means to snatch Pandava’s prosperity.

“But, O king, I know the means by which Yudhishthira himself may be vanquished. Listen to me and adopt it.’”( 2.47)

Nowhere Shakuni said that he got magical dice coins. He just said that he was skilled in the game whereas Yudhishtir, though addicted to gambling never got the prowess to play dice.

“I am skillful at dice. There is none equal to me in this respect on earth, no, not even in the three worlds, O son of Kuru. Therefore, ask him to play at dice. Skilled at dice, I will win his kingdom and that splendid prosperity of his for you. “(2.47)

This was the assurance of Shakuni to his sister’s son.

Shakuni did not forget to remind Duryodhan that he will act only on the command of Dhritarashtra.

“But, O Duryodhana, represent all this to the king (Dhritarashtra). Commanded by thy father, I will win without doubt the whole of Yudhishthira’s possessions.’ (2.47)”

This whole scene and interaction between Duryodhan and Shakuni reveals the true character Of Shakuni who was forced to conceive the plan of Dice game not by intention but by obligation.

What followed next was the dice game which projected Shakuni’s uncanny ability to lure and tempt Yudhishtir, the vulnerable opponent, not adept in gambling lose his prosperity, freedom, and dignity. Shakuni’s unpardonable sin of goading Yudhishtir to stake Draupadi resulted in making him the vily and cunning gambler who played his game and won, but lost his integrity and spirit of humanity.

Shakuni did not play any active role in humiliating Draupadi. It was Karna who took the lead followed by Duryodhan and Dussasan in Draupadi vastraharan and her humiliation.

Shakuni and aftermath of dice game

Shakuni almost took a backseat in driving events to the Kurukshetra battle. After the debacle of Ghoshayatra, when Duryodhan was upset about getting life due to Pandavas, Shakuni offered valuable advice to him.

“Be cheerful, do not cast away your life; but remember with a pleased heart the good they have done thee. Give back unto the sons of Pritha their kingdom, and win thou both virtue and renown by such conduct. By acting in this way, thou mayst be grateful. Establish brotherly relations with the Pandavas by being friends, and give them their paternal kingdom, for then you will be happy!”(3.249)”

This was a different Shakuni who realized the value of morality and gratitude. Duryodhan was saved by Arjun from Gandharvas. Yudhishtir did not nourish any malice for his previous offenses. Now Duryodhan should repay by giving back the kingdom of Pandavas. This was how Shakuni persuaded his nephew to be grateful when he was blessed with life only because of his magnanimous cousins.

Of course, Duryodhan did not pay heed to his advice and continued his march towards doom.

Shakuni did not have any significant part in Uttar gograhan also. He was not the brain behind the attack on Matsya kingdom. The discussions were spearheaded by Karna along with Duryodhana and Dussasana in which Bhishma, Drona, and Kripa participated. We don’t see Shakuni voice his opinion regarding the attack on Matsya to expose Pandavas.

Shakuni loyally stayed with Duryodhan at every step. Knowing Duryodhan’s stubborn attitude, he did not try again to convince him from fighting the Kurukshetra war.

Shakuni fought the war under the leadership of Bhishma, Drona, Karna, and Shalya with dedication and died on the last day of battle. He was killed by Sahadeva who fulfilled his vow, taken in dice hall.

On the whole Shakuni of the Epic never fits the role of Pratinayak of the greatest Epic Mahabharat. He was one among the evil four who sided with adharma till the end but he was not responsible for each and every event that moved the story forward to the Kurukshetra battlefield.