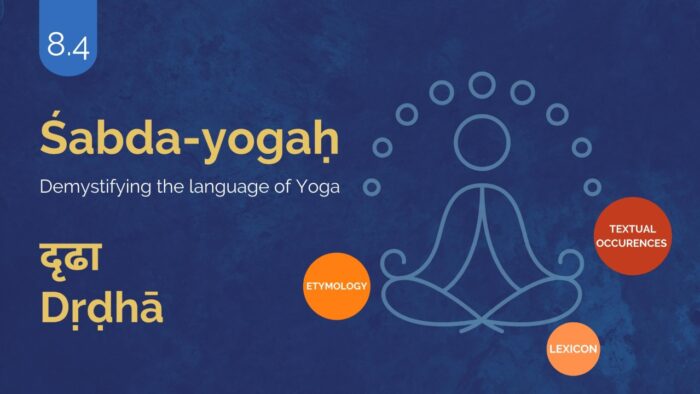 Three texts – Yogasūtra, Haṭha-yoga-pradīpikā and Bhagavad-gītā are consulted for textual occurrences portion.  Śabda-yoga is intended to help students, teachers, and professionals of Yoga to develop a sound grammatical, contextual, and thereby an authentic and immersive understanding of Yoga terminologies. 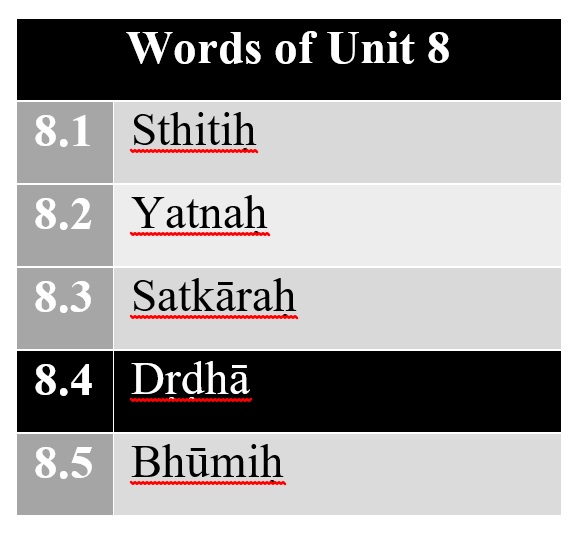 From among the five words for this unit 8, this part discusses the fourth word Dṛḍha.

Though the suffix and root word are clear, the meaning and form are directly given by the grammatical treatise aṣṭādhyāyī. The grammatical rule states दृढःस्थूलबलयोःdṛḍhaḥsthūlabalayoḥ (7.2.20) – the word dṛḍha is to be used to indicate the meaning – stout and strong. Because of the peculiarity of formation, there cannot be a derivative statement.

There are three entries in Amarakośa for this word

Thus as evident, to the word dṛḍha – the lexicon gives four meanings – excess, tough, capable and stout. It would be interesting to the meaning of the word in the Yogic context.

There is just one occurrence of the word in this text.

The term Dṛḍha which is part of the compound Drdhbhūmi in this Yogasūtra refers to firmness in the practice of Yoga.

There are three view points on the word Dṛḍha from the traditional commentaries. They are as follows –

2) Sadāśivabrahmendra states that the firmness here refers to being no shaken by very grave suffering – prabalataraduḥkhenāpicālayitumaśakyatvam.

3) Yogacarya Sri Krishnamacharya presents a different view when he states – the firmness here refers to firmness in the Dhātus (7 elements that constitute the body like Rasa, rakta etc.) & the nourishment and growth of the body – dhātudārḍhyamindriyaśaktiśarīravṛddhiścāmoghānibhavanti

There are six occurrences of the term in this text. The respective portions are summarized belowwith references –

There are 18 references to the word in this text. It could be noted that in all the aspects of practice of Haṭhayoga – namely āsana, prāṇāyama, mudrās and Nādānusandhāna the expression Dṛḍha finds a place. Summarized explanation of the references limb-wise is presented below-

Thus the pervasive use of the term dṛḍha could be noted in Haṭhayogapradīpikā.

Dṛḍha is just an adjective. But the rich textual occurrences point to the importance of Dṛḍha in the context of Yoga.

Apart from this, Dṛḍha in Yoga texts is also considered significant in the context of having firmness in –

In just one occasion it could be noted that Dṛḍha has a negative connotation as that of stubbornness of the mind, stated by Arjun in the Gītā.

Based on this Śabdayoga analysis – it emerges that – at the macro level of general practice of Yoga and also in the micro level – while practicing each and every limb of Yoga – Dṛḍha – is an unmissable quality for Yogins.

Unit 8 To be Continued…