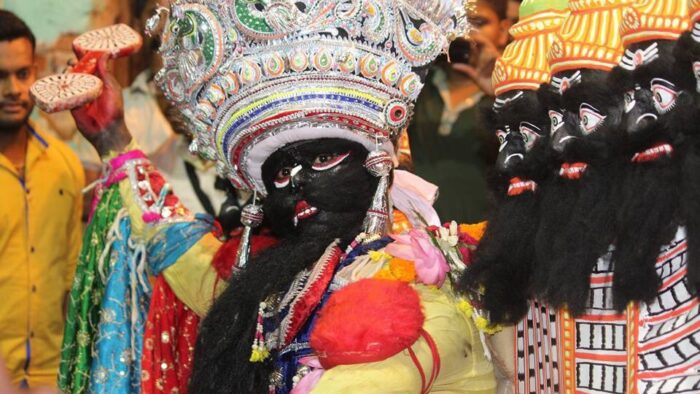 The culture, tradition and lifestyle of Odisha are bonded to the temple of Purushottma, Srimandira of Shri Jagannath. Shri Jagannath is the omnipresent guide to the people of Odisha. The culture of Jagannath is distinctive due to its all-embracing nature, taking it closest to the basic principles of Sanatan Dharma – ‘way of life’. The several yatras undertaken by Shri Jagannath, his siblings and other Gods outside the temple  is a resolute practice to promote public participation and adoration of the Gods, irrespective of religious and social identities.  The cultural and spiritual beliefs of the people are reflected in the various festive celebrations, rituals and ceremonies conducted locally. The Saahi Yatra or the Saahi Jaata is a springtime celebration specific to Puri that aims at preserving the sacred ethos of the region and promoting brotherhood.

Saahi Jaata, a brightly hued open air theatre performance has its origins deeply embedded in the Jagannath sanskruti and the history of the region. Commencing from the day of Ram Navami, the Saahi Jaata begins on Chaitra Navami tithi with the birth of Shri Ram and continues to be performed on the streets of Puri for a period of around ten days and ends on Baisakha trutya tithi. The entire period sees the depiction of ‘Ramayana’, starting from Shri Ram Janma to Ravan Vadh. On the last day, the actors perform the Jagannath Ballabha. All the episodes are enacted in the alleys around the Srimandira, in the most exceptional manner.

In Odia vernacular, the word Saahi refers to the various marked zones/colonies within the city. These zones have definite attributes that make them distinct from each other giving the inhabitants the specific address of that Saahi.

The History of Saahi Jaata dates back to 1230 AD which makes it one of the oldest festive celebrations of Purushottama Dhama, Puri. Records illustrate that the temple did not have a tall boundary – the Meghanada Pachiri, to safeguard the Srimandira and the valuables of the temple from religious invaders. To prevent invasions, Gajapati Chodoganga Deva had developed many Kotas – Forts, Jaga Gharas – gymnasiums, Akhadaas – Wrestling Pits near the temple premises. These Jaga Gharas and Akhadaas trained youth in the Odra combat style and also motivated them to stay fit. The aim was to keep a security mechanism prepared, anticipating foreign invasion on the temple. Around eighty Jaga Gharas were developed with the aim of strengthening the youth physically and making them capable of the temple’s security.

One can see ancient Saahis located on both sides of the Bada Danda – The Grand Road and in the bylanes around the Shri Jagannatha temple even today. All the Saahis have a dedicated Jaga Ghara and their own presiding Deity. These Deities are also instrumental in giving the Saahis their respective names. The Jaga Gharas of different Saahis tutor the local youth with wrestling techniques, acrobatics and various combat skills with swords, sticks and other weaponry. History has it that these Saahis once defended the temple of Lord Jagannatha from invaders and also established order during the Saahi Jatra. Traditional weaponry of the Saahi Jaga Gharas is taken out onto the street in a grand parade. The ancient war skills and combat techniques taught by seasoned teachers are exhibited by trained warriors keeping the age old tradition alive.

In the past besides being entrusted with security duties of the Srimandira , these Saahi Jaga Gharas were best known locally for

Meaning-(In these Saahi Jaga Gharas the members would together be involved in Janga – Learning war techniques ; Sanga – Being with Friends; Bhanga- Consuming Hemp in a group; Pangata – Enjoying extensive meals together and Sangeeta – Enjoying Music in each other’s company)

From the day of Ram Navami for around eleven days, the performances start late in the evening and continue throughout the night until day break. Sometimes acrobatic processions can also be seen during the day time. The shrill pitch of the conch declares the beginning of the event on every festive day. The artists begin the performance accompanied by the rhythmic music of the mardala, jhanjha, dholo, ghanta and the shrill trumpeting of the telengi.

Day two – Dedicated to Yagna Rakhya and is performed at the Harachandi Saahi with partial involvement of Maati Mandapa Saahi.

On Day Three – Ram and Sita Vivha and Parasuram Leela are enacted at the Harachandi Saahi. The performance further moves to Baali Saahi with Ram, Sita and Parasuram.

Day five – Gives the audience a glimpse of Sita Haran by Maya Ravana at the Kundhaibenta Saahi, which further moves into Dolo Mandapa Saahi with Shri Ram, Shri Lakshmana, Ravana and Maricha.

Day six – Illustrates the burning of Lanka by Shri Hanuman at the Dolo Mandapa Saahi. Shri Hanuman moves to the Kundhaibenta Saahi after causing the damage.

Day seven – Shows the devising of plans by Shri Ram on how to reach Lanka in the Setu construction episode at Bali Saahi and then the movement of the Vanara sena along with Shri Ram, Shri Lakshman, Shri Hanuman to Hara Chandi Saahi.

On the eighth Day – the annihilation of Ravana is enacted at the bylane of Bali Sahi and then the procession moves to Hara Chandi Saahi.

On Baisakhi Trutya, the ninth and the last day of the Sahi Jaata – The performers display the return of Shri Ram from exile and his crowning as the King of Ayodhya. This final act is done in the Garudabada Saahi with Shri Ram, Devi Sita, Shri Lakshman, Bharata, Shatrughna and Shri Hanuman .

The performers swiftly move around the bylanes, delivering bachanika – dialogues in a unique Creole language – a mix of  classical Sanskrit and Odia language.

Much in contrast to the Ram Leela performed in Northern India where Shri Ram, Devi Sita and his siblings are glorified and shown as central characters, in Saahi Jaata the character of Lankapati Ravana is depicted as the most important one. Instead of presenting all the episodes from Ramayana, only a few selected acts are performed.

Mostly young adolescent boys and bachelors perform the various roles except for the role of Ravana that is allowed to be enacted by a married man. Women are not allowed to play any role. The character of Parsuram that is linked to the Nagarjuna Besha of Shri Jagannath is given utmost importance. Meddhas of different Puranic characters add glamour to the entire show.

Ravana or Rabana in the local dialect is the most vital and glorified character of Saahi Jaata. The actor performing the role of Rabana must visit the temple of Shri Jagannata, offer prayers to the Lord and then take to the street for his performance. His face is painted black and he carries nine mask heads tied onto a wooden frame or Taati, as he dances through the various Saahis. His power and strength can be judged through his intense and passionate dialogue delivery in Sanskrit. His presence is reflected through the resplendent attire he wears and the weapons he flashes as he swiftly moves through the alleys. His character reflects diverse shades as he performs his part as Maya Rabana – Rabana in disguise; Lankapodi Rabana – Rabana while Lanka is put to flames; Setu Rabana – Raban when the bridge is being made, Yagna Rabana – Rabana when the Yagna/fire ritual is being performed; Yodhaa Rabana – Rabana the soldier in combat and finally Baddha Rabana – Rabana who is killed.

The character of Parasuram is beautifully portrayed in the Naga attire that is also worn by Shri Jagannath during the Nagarjuna Besha which occurs every 14 years in the month of Kartika, at the Srimandira. The Naga culture is specific to Puri Dham..

Both Parasuram and Naga carry the same attributes in terms of makeup and attire. Parasuram, considered the sixth incarnation of Shri Vishnu shares the power and vigour of the Naga. It is believed that the Nagarjuna attire has been inspired by the garments worn by the Naga Sadhus living in Digambar Akhada for the protection of the temple. In the Parasuram Leela, the annoyance and confrontation of Rishi Parsuram with Shri Ram upon the breaking of Shiva’s Bow is elaborated on day three during the Sita Vivaha episode.

Parasuram is painted yellow, sporting a long beard and moustache, similar to the Naga Sanyasis. Dressed in deer and tiger skin, decorated with feathers, the costume has the simplicity of the Naga Sadhus and the valour of warriors at warfare.

The Naga is dressed with a Naga-Tati around his waist. The Naga-Denu  rests on the back, adding chivalrous grandeur to the personality of the warrior. The Naga is decked with a bow and a quiver packed with powerful arrows. He also holds a dagger, a knife, a sword and a pike, symbolizing his combat efficiency.

With the larger than life characters, dressed in huge colorful attires, decked with fine accessories and attractive make-up, the carnival of the Meddhas along with Shri Ram, Devi Sita, Shri Laksman, Shri Hanuman and Lankapati Ravana, Parsurama and Naga fills Puri with a spectrum of colours and a burst of excitement. Enacting the various phases of Ramayana with dialogues, narrations, swaying body movements and a lot of martial enthusiasm, the performers infuse the ambiance with the epic of Ramayana and other Puranic tales in the most engaging manner.

Crawling through the narrow crisscross pathways of Puri, the Saahi Jatra preserves the hue of faith, culture and tradition in the whiff of spring.

The eleven day Saahi Jaata in the alleys of Puri celebrates the birth of Shri Ram by conserving the religious legacy of Sanatan Dharma embellished with a fusion of martial arts, acrobatics and classical dance moves. With almost a thousand actors involved in the Puranic tableaus performance, Puri’s Saahi Jaata is undoubtedly the world’s largest open air theatre on religious themes.