Plato And The Upanishads – Part III 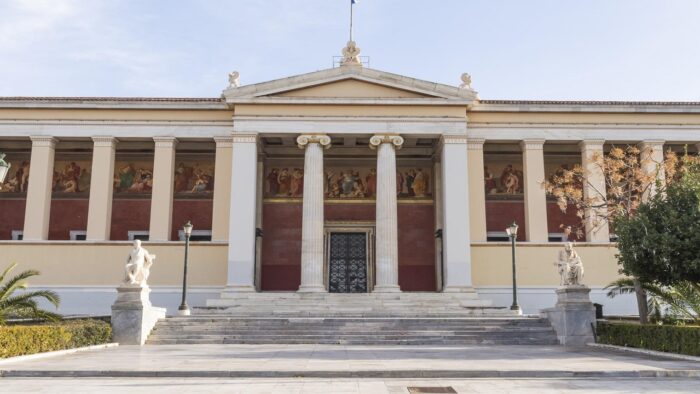 In the Introduction and in the previous article Part I and Part II, the author had discussed several parallels between Upanishadic teachings and those of Plato. In part III he demonstrates some of the marked differences between these two systems and touches upon other smaller but equally important differences even though at first sight the similarity may seem very pronounced.

This concerns the origin and end of man. In Plato the origin of man appears in at least three versions. a) In Sumposion 189C ff Aristophanes talks of the original spherical creatures (some androgynous) who were sliced in two by Zeus, but nothing is said of their genesis. b) Elsewhere, with slight variations, men spring from the Earth (Menexenos 237D; Politikos 269B; Protagoras 320D ff). c) The most important description occurs in Timaios 41D ff: here the Demiurge fashions human souls in the form of stars and equal in number to them out of the residue of the material used for the creation of gods but now shaken and mixed to a second and third degree of grossness while the gods (themselves created earlier by the Demiurge) fashion the physical bodies in which the souls will be incarnated.

The end of man is analogous. Since man (the soul which is his essential immortal being) is created from secondary materials and at a level lower than the Creator himself, his final destination cannot be different. Plato nowhere hints that man issues from the very substance of the Demiurge, who is the Supreme God-creator. The embodied souls, if they retain (or regain) their purity, will, on death (or after the necessary re-embodiments), return to their stellar form in heaven: this for Plato is liberation and immortality. If the souls misbehave while embodied in this world, they will transmigrate to lower forms, even worms and shellfish – until even these one day remember their true origin and return to their heavenly state in the star-zone (Timaios 41D ff, 90E ff). They do not unite with the Creator. In Phaidros too the souls of the blest reach the uppermost celestial limit and behold the area “beyond/above heaven (huperouranios topos)” and gaze upon True Being (on ontos) but do not cross the border line (247C- E). So they remain in immortal felicity (Timaios 42D) as eternal luminaries, but apart from True Being. This idea is found in some Vedic Hymns also (RV X, 68, 2; 107, 2; 154, 5; AV XVIII 2, 47) where wise men and heroes have gone to the sun or the stars (the 7 rsis as the Great Bear), as distinct from Yama’s resting-place, in the realm of light in the highest heaven (RV IX 113, 7-11; X, 14, 8; also AV XI, 1, 37, etc). But it is not found in other Indo-European branches nor in Homer and Hesiod, where the dead go to Hades below earth (and the heroes to the Island of the Blest, somewhere in the western Ocean).[7] It is found also in Egypt and it seems probable that Plato took the idea from there. In the Upanishads the heaven and its constellations are part of the transitory manifest creation, as the Maitri puts it poetically: “All this is perishable (ksaisnu)… The great oceans dry up; the mountains get levelled; the fixed pole-star deviates; the ropes [that hold the stars] are cut; the earth gets submerged; the gods depart from their stations”. The passage ends with the poignant question: “In such a world of samsara [=wandering back and forth] what good is it pursuing the enjoyment of desires?” (I, 4).

Very different is the situation in the Upanishads. Brahman is before creation. The whole universe with all its worlds and creatures arises out of the substance of the Brahman, contains it and remains in that substance and finally dissolves back into it. And so it is with man. The substance of the Absolute in man is termed atman and this atman is the Absolute all the time. Although the texts often speak of returning or merging with the Absolute, this is due to language limitations or metaphorical expressions. There is no actual journey, return or merging: the atman is brahman all the time. This is what has to be realized with one’s whole being or consciousness. The only element that seems to “travel” and change from one embodiment to the next is karma ‘action’ (BU III, 2, 13). With the dissolution of this karma and its attendant cause, desire kama, “When all the knots of the heart are cut here” (KU II, 3, 15), the mortal man becomes immortal.

Absolute and final liberation moksa is the realization of the identity of atman and brahman in a practical sense in actual experience. But apart from this, the Upanishads recognise a limited fulfillment in a kind of paradise called brahmaloka ‘the world/heaven of Brahma’. This is limited in that the good and virtuous ‘soul’ stays there for the period merited by its good deeds (sacrifices, alms-giving, etc) and then has to start again in a new embodiment in this world. So Mundaka I, 2, 5-7 states “this is the brahmaloka for you won by good deeds (sukrta)”.[8] In any case this paradisal brahmaloka is itself part of the Creation and will one day be dissolved back into the Unmanifest to await the next cycle of creation. Thus stay in this world is only a limited immortality or eternity. True liberation and immortality is beyond it all in the brahman – and this is totally missing from Plato.[9]

Given the many similarities between the Upanishadic tradition and the Platonic school and taking into account other similar doctrines in the earlier Pythagorean and Orphic teachings, many scholars naturally wonder whether there were contacts (or cross-influences) between India and Greece before Alexander’s thrust into N-W India in the late fourth century BC. There are some indications that some contacts may have taken place. But this issue requires a separate study.

There are important differences, as we saw, between the Dialogues and the Upanishads. On the other hand, the similarities are just as significant. Both teachings emphasize the man’s need to free himself from his slavery to desires and his blinding attachment to mundane pursuits and to turn inwards to his true self, the immortal aspect of his being.

In the Eastern Mediterranean the idea of the Unity of Being, the identity of the self (or soul) with the Absolute (or Godhead) appears some centuries after Plato in the Gnostic (or Proto-Christian) teachings. One quotation from the gnostic Gospel of Truth should suffice: “And in you dwells the light that does not fail. (…) Be concerned with yourselves… not with other things. (…) This is the Father [=Godhead], from whom the beginning came forth, to whom all will return. (…) They rest in Him who is at rest… and the Father is within them and they are in the Father, being perfect” (Robinson 1990: 7, 49-51). Among the thinkers of this interesting period (the first three centuries of the Common Era), Maximus of Tyre (flourished 150-180 AD) taught the same idea (going beyond Plato’s and the Middle Platonists’ view): “The end of the way is not heaven, nor the celestial bodies… But one must reach beyond these and stretch over (huperkupsai) heaven to the true region and the peace thereat” (Lilla 1971: 189). In the Platonic tradition itself the Unity of Being takes flesh in the Neo-Platonist Plotinus who flourished in the third century CE.

[7] That constellations or stars like the Pleiades, Hyades, Orion etc, were formerly people is an idea found in Greek texts only at c 500 BC and after. There are one or two later dubious ascriptions to Hesiod but no attestation in the surviving Homeric and Hesiodic texts themselves. So the idea may have come from Egypt. However, there are some Orphic fragments (gold plates in tombs) suggesting that the soul goes to heaven; these are from c 400 BC but they may represent a much older tradition. On the whole, the situation is unclear.

[9] Th Mc Evilley argues (hopelessly) that the upanishadic teaching is in Plato. He cites Menon and its recollection doctrine; the pre-Socratic notion that to know something is to be it; the Christian Neoplatonist Philoponus who says that the Ideas actually exist in the soul; the Chandogya VIII, 1, that “The little space within the heart is as great as this vast Universe”; the Timaios 43D that the human soul is the microcosm of the World Soul; Plotinus saying “all things are everywhere and all is all and each is all” (Enneads V, 8, 4); a Buddhist text that “Each contains complete within itself all the Ten Thousand forms” (2002: 165-6). All these are clearly irrelevant. The fact is (and Mc Evilley ignores it completely) that in the Timaios human souls are created from secondary material by the Demiurge (do not issue from Himself, or, are not of His own substance) and never unite with Him but remain, even when utterly pure, as stars, apart from Him!

For Plato there are many editions and many more translations of the dialogues. The translations used in this paper are all by N.K.

For the Upanishads the text used is that of Eighteen Principal Upanishads, 1958, Vaidika Samsodhana Mandala, Poona.

Rosenberg A. 2000 The Philosophy of Science, London, Routledge.

The paper first appeared in Omilos Meleton, Athens: January 2004 and has been republished with author’s permission.