The Legend Of Nara And Narayana: Sages Reborn as Krishna and Arjuna 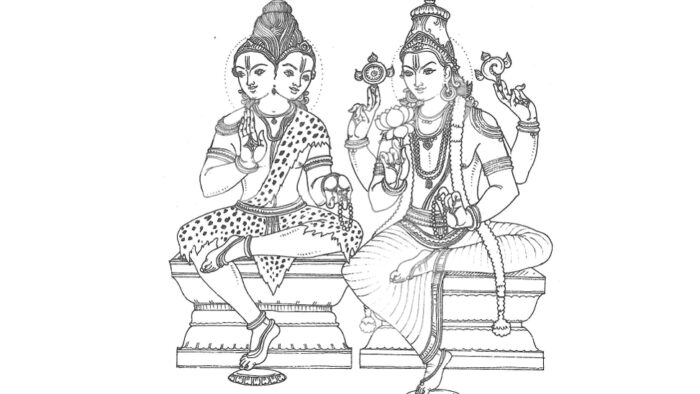 The epic Mahabharata starts with the following verse:

“‘Jaya’ must be recited after having bowed in obeisance before Narayana and also Nara, the supreme human being, and also the goddess Sarasvati.”

Narayan, the supreme lord and Nara, the exalted human being, are together worshipped along with goddess Saraswati, before reciting the Epic.

Nara, mentioned here in the verse, is considered to be Arjuna in his previous birth. Arjuna’s identity with Nara is established throughout the Epic.

Mahabharata depicts Krishna and Arjuna as inseparable friends and soulmates. Their bonding could be attributed to their previous birth connection. They are the ancient sages Nara and Narayana who dwell in Badarivan and do penance.

Nara and Narayana were both considered as Gods and Rishis, who took birth as sons of Dharma through his wife Murti who was a daughter of Daksha. It was told that Narayana took birth as four – Nara, Narayana, Hari, and Krishna.  Out of these, Nara and Narayana travelled to the hermitage of Badari in their golden wagons and engaged in fierce austerities there.

Nara and Narayan became highly famous more due to their re-incarnation as Arjuna and Krishna in Dwapar yug. But the Epic highlights their own identity as the ancient sages, born to defend dharma by fighting  with asuras. As per Maha Bhagawat, Nara, Narayan were the fourth  incarnation of Lord Vishnu.

There is much confusion regarding Arjuna’s Nara identity because of him being born as Indra’s son by Kunti. He was acknowledged as Shakra’s biological son, and one among the five Indras born as Pandavas. But the Epic cleared this ambiguity by specifying that Sage Nara was born as Indra’s son named as Arjuna.Chandradev says thus to the Devas, when he is requested by them to let his son Varchas be born as Abhimanyu.

Nara, whose companion is Narayana, will be born as Indra’s son and indeed, will be known as Arjuna, the mighty son of Pandu. This boy of mine shall be his son and become a mighty car-warrior in his boyhood.

That was how it happened. Sage Nara has to incarnate along with Narayan himself. On the other hand, Shakra’s Ansh  has to take birth on earth to endure the curse of Lord Shiva. Both these inevitable situations are merged together and result in Arjuna’s birth.

This fact was validated by Veda Vyasa in Maha Bhagavata also. When Krishna and Arjuna go to Vaikuntha to bring back the sons of a brahmin, Lord Vishnu addresses them with delight:

‘I brought the sons of the brahmin over here with the desire to see the two of you who descended as My expansions to protect dharma. Please quickly return to My presence after you have killed the ones of darkness who burden the earth. Even though all the desires of the two of you have been fulfilled, oh best of all persons, you should be engaged in upholding the dharma for the sake of the common man, just as the sages Nara and Nârâyana did”( SB 10-58,59) Narayan  knew the truth but Nara remained ignorant

Krishna was Narayan, the supreme god born to establish dharma in Dwaparyug. Sage Narayana empowered with much magnificence and brilliance of the Lord himself arrived on earth with his eternal companion Nara born as Arjuna.

Surprisingly Arjuna did not remember his previous birth despite hearing this fact from many devatasgnidev mentions Brahma’s instruction during Khandavdahanthat Nara Narayan born as Arjuna and Krishna would help him burn the Khandava forest. Krishna too states the inseparability of them both to Arjuna in Vana Parva .

You are mine and I am yours, while all that is mine is yours also! He who hates you, hates me as well, You  are Nara and I am Narayana or Hari! We are the Rishis Nara and Narayana born in the world of men for a special purpose. O Partha, you are  from me and I am from you! No one can understand the difference that is between us!’

Sadashiv enlightens Arjuna of his previous birth Nara, the companion of Narayana.(3.40)

Veda Vyasa himself validates the fact in Ashramavasa Parva:

Know that Bhimasena, the powerful scorcher of enemies, came from the Maruts and Partha Dhananjaya was the rishi Nara. Hrishikesha was Narayana.(15.48)

Arjuna does not seem to realise the truth of his existence. That must be the reason why the Lord said this in the Bhagavad Gita:

The Supreme Lord said: Both you and I have had many births, O Arjun. You have forgotten them, while I remember them all, O Parantapa.(BG 4.5)

Throughout the Epic, we see Arjuna excel himself as a human and achieve feats that make him the pride of his people, and the envy of his rivals. We see human excellence at its peak in the journey of Arjuna rather than his divine touch. Arjuna the student, brother, and son, proved himself the worthiest human by sheer commitment and focus. As a warrior he reaches the pinnacle of success with his glorious triumphs.

That might be the reason why people find it difficult to visualise Arjuna as the Vishnu Ansh Nara, the ancient sage who was forever with Narayan in destroying adharma. They connect more with the human Arjuna, the third Pandav who became a super human through active learning and continuous hard work. But the fact remains that Arjuna is Nara, the eternal companion of Narayana.

Nara Narayana, the upholders Of Dharma

Mahabharata provides information about the battles fought by Nara Narayana in ancient times. During the Samudramanthan when Narayan emerged as Mohini and distributed Amrita to the devatas, a fierce battle commenced between Nara and Danavas.

“Sauti said, ‘Then the Daityas and the Danavas equipped with first-class armours and various weapons attacked the gods. In the meantime the valiant Lord Vishnu in the form of an enchantress accompanied by Nara deceived the mighty Danavas and took away the Amrita from their hands.

Then the divine Nara appeared at the scene of the dreadful conflict between the Asuras and the Ganas (the followers of Rudra), and reducing to dust those rocks by means of his gold-headed arrows, he covered the heavens with dust. Thus discomfited by the gods, and seeing the furious discus scouring the fields of heaven like a blazing flame, the mighty Danavas entered the bowels of the earth, while others plunged into the sea of salt-waters’”(1.19)

Battle with asuras happened at the time of coronation of Sakra also. Nara fought with the Gandiva bow as mentioned by Sadashiv himself in Kairata Parva.

Mahadeva told Arjuna that in his previous life, he along with Krishna had fought with asuras at the time of the coronation of Sakra. Nara held the bow Gandiva, whose twang resembled the roar of the clouds. Yet again, we come across another war fought by the twin sages through the narration of Parashurama in Udyoga Parva. Dambhodbhava, an arrogant king, was defeated by Nara with a blade of grass. Dambhodbhava challenged Nara,Narayana to fight with him, having conquered the whole earth. The sages tried to dissuade him from battle but he was adamant. Nara accepted the challenge and then occurred the most wonderful encounter that was never witnessed before. Dambhodbhava with all his troops, desirous of slaying that ascetic Nara, covered all the sides with a shower of arrows. Nara, however, by means of those blades of grass, baffled all those terrible shafts of the king that were capable of mangling the bodies of hostile warriors. The invincible Rishi then let off towards the king his own terrible weapon made of grass-blades and which was incapable of being counteracted. And highly wonderful was that which happened, for that ascetic, incapable of missing his aim, pierced and cut off, by those grass-blades alone, the eyes and ears and noses of the hostile warriors, aided also by his power of illusion. ( 5.96) Dambhodbhava got defeated by Nara and begged pardon. There were more such instances presented in Puranas where Nara, and Narayana fought battles and rooted out evil.  Asura King Prahlada was defeated by them as per MahaBhagavata. Skanda Purana, Garuda Purana, Vamana Purana, and Vayu Purana also mentionanecdotes connected to Nara, and Narayan. Nara Narayan as per Shiv Puran established the Kedarnath Jyotirling with the grace of Sadashiv. Badari dham, Kedar dham and Nara Narayan hills expound the glory of Nara, and Narayan;the sages who blessed us with the Bhagavad Gita, that shows us the path to fulfilment.

Narayana tells Narada that he will wipe out adharma and establish the rule of dharma with Nara as his partner.

I shall next slay Sisupala in the sacrifice of king Yudhishthira, the son of Dharma, to which sacrifice all the kings of the world will bring tribute. In some of these feats, only Arjuna , the son of Vasava, will become my assistant. I shall establish Yudhishthira with all his brothers in his ancestral kingdom. People will call me and Arjuna as Narayana and Nara , when, endued with puissance, we two, exerting our strength, shall consume a large number of Kshatriyas, for doing good to the world. (12.640)

Point to be noted here is that the Lord indicates Vasava’s son as Nara who is none other than Arjuna. While Narayana as Krishna kills many asuras like Kansa and others ,he makes Nara incarnated as Arjuna carry out the task of annihilating evil in association with his mighty brother Bhimsen. Narayan drives the chariot of Dharma in Kurukshetra war, while Nara fightst the rivals. V. S. Sukthankar aptly pointed out that there is no duality between them:

“It is not sufficient to think of Arjuna as the Pandava Hero, and Krishna as the Yadava chieftain.
They should be regarded as Nara, The Man Par Excellence and Narayana, the Lord himself.
They should be identified as Jeevatma and Paramatma. In fact there is no duality between them. That is why Krishna is one of the names of Arjuna.
As Krishna, he was driving the horses and as Arjuna he was fighting war. “

Hence the Nara Narayana tatva needs to be properly understood to connect with the unique bonding shared by Krishna and Arjuna throughout the Epic.