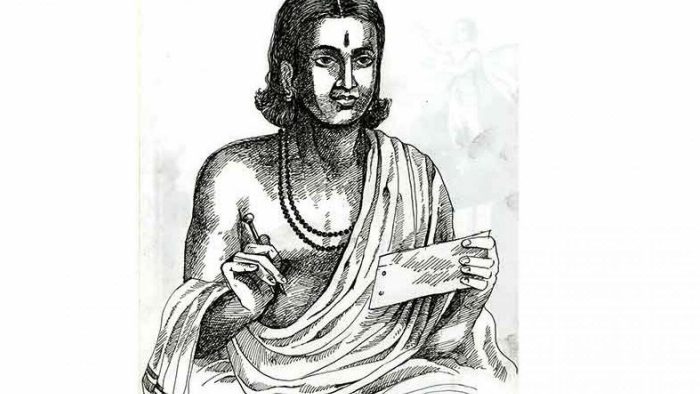 India is home to a unique and vibrant civilization. It is unique for being the only ancient civilization to have survived the test of time. The ancient Egyptian, Mesopotamian and Assyrian cultures are only of academic interest today. Even the not-so-ancient Greek civilization has been wiped out clean from its homeland.

However, the Vedic civilization of India, which has its origins in the Indus-Saraswati river basins, is not only alive but continues to thrive till date. This has happened because some of the most fundamental ideas of Vedic culture and civilization have been disseminated among the people of this ancient land by way of powerful symbols, festivals, and their manifestations in the various art forms of this country. And Kalidasa is the most beautiful and yet, the most authentic representative of this phenomenon of cultural pollination.

For at least 1600 years, Indian culture has unanimously conferred on him the title of ‘kavikulaguru’ – the Master for all poets. And since then, every great poet or critic has seen it fit to pay glowing tributes to his contributions. As illustrative examples, we can examine a few of these tributes.

Banabhatta (7th century CE), the greatest master of prose in Sanskrit and probably second only to Kalidasa, says

“Is there someone who will not be delighted with Kalidasa’s words in just the same way as being surrounded by a dense foliage of nectar-rich flowers?”

Gangadevi (14th century CE), the daughter-in-law of Bukkaraya (Bukka I), one of the first kings of the great Vijayanagar empire, says

“I wonder if there are any poets at all who are not indebted to Kalidasa. Even today, they are making a living out of his ideas”

Since Kalidasa’stime, many have tried and failed to reach the heights that he so effortlessly scaled on a regular basis. This fact is summed up by another great representative of Indian culture and one of the founding pillars of the mighty Vijayanagar Empire, Sayanacharya (younger brother of sage Vidyaranya)

“The path of Kalidasa, littered with melodiously lucid words, is there for all to see. But Alas! Even as they are seeing it so clearly, none among the poets have been able to tread the same path”

“The greatness and depth of Kalidasa’s works can be understood and appreciated by Kalidasa himself, Goddess Sarasvati or Lord Brahma; It cannot be understood by mere mortals like me”

If this is the praise that the learned have heaped on Kalidasa, the not-so-learned have created numerous legends to eulogize him. It is a credit to Kalidasa’s greatness that his influence has percolated down to the commonest among the populace. According to one of the legends, Kalidasa was a cowherd who became a great poet by the grace of Goddess Kali, and hence he adopted the name Kalidasa. This legend has been depicted in films made in many regional languages. Another legend says he was one of the nine gems in the court of King Vikramaditya, who is the person after whom one of the most important Indian calendar systems, the Vikrama Shaka, has been named.

However, most of the legends about Kalidasa are associated with King Bhoja of Dharanagara, the present-day Dhar in Madhya Pradesh. King Bhoja himself is amongst the most fabled kings of our land. He was a great warrior as well as a fine scholar in many disciplines. He is known to have composed 84 works and proved to be the greatest obstacle for Mahmud Ghazni, one of the most notorious and barbaric Muslim invaders, who was frequently trying to invade our country. For these reasons, King Bhoja became a huge legend for the Indian populace.

Therefore, the Indian mind thought it fit to associate one legend Bhoja with another legend Kalidasa. Most of these legends are documented in Bhojaprabandha, which is an entertaining work centered on King Bhoja and some of the interesting incidents in his life. Kalidasa figures prominently in this work.

Some of the legends about his relations with courtesans don’t exactly serve to enhance his greatness. But, that is the way of legends. They grow by contributions from all sections of society and each would be reflective of the qualities they adore and want to attribute to their heroes. The only thing that is conclusively proven by the wide variety of legends about Kalidasa is the popularity he enjoyed among all sections of the Indian population.

Beginning with this introduction, this series will exhaustively explore the life, work, contribution, and the lasting legacy of India’s National Poet, Kalidasa.