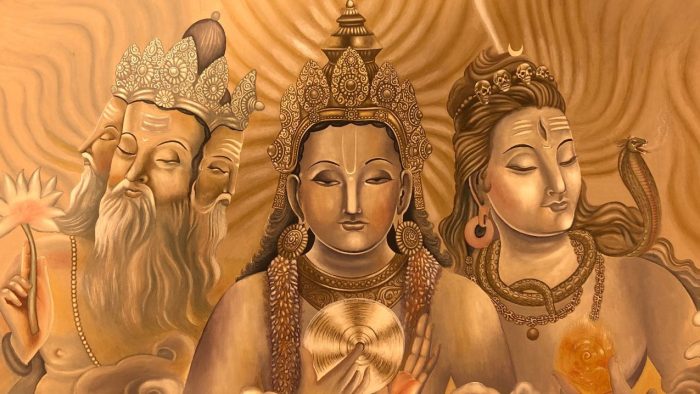 Synthesis of Brahma, Vishnu, and Shiva

Kalidasa was the first great poet to advocate the basic oneness governing the three forms of Brahma, Vishnu, and Shiva. He has composed elaborate eulogies to all three across his works.

These apart, Kalidasa has written memorable invocatory verses eulogizing Lord Shiva in all his major works. In the seventh chapter of Kumarasambhavam, he explicitly states the essential oneness of the three forms of Brahma, Vishnu, and Shiva.

Kalidasa and Other Arts

From his works, it is clear that Kalidasa had extensive knowledge of dance, music, and painting. His knowledge of dance can be estimated from his play Malavakagnimitram. At the very beginning, he makes his famous remark about the stage.

The stage is a one-stop entertainment solution for people of varied tastes and orientations.

Elsewhere in the same play, we get to know of his intimate knowledge of dance and his astute observations about it.

Similarly, his knowledge of music and painting is found scattered across his works. We also see a close correlation between his works and some of the surviving sculptures from the Gupta Golden Age.

For example, the Deogarh Dashavatara temple has a relief sculpture depicting Lord Vishnu sleeping on his serpent Adishesha. It is identical to the description of Lord Vishnu in the tenth chapter of Raghuvamsham. Also, depictions of the marriage of Lord Shiva with Goddess Parvati can be found in the caves of Ellora and Elephanta.

These have all been based on the mythology, description, and imagery created by Kalidasa in Kumarasambhavam. The ornate detail of the sculptures correlates well with the ornate nature of Kalidasa’s poetry.

The contributions of Kalidasa to world literature, in general, are massive. Apart from the inestimable qualitative value of his seven works, there are many quantitative things in which he excelled.

He was the first poet to write a complete work devoted to describing the seasons, in his Ritusamharam. His other short lyrical poem Meghadutam became so popular that innumerable imitations of it have appeared. Only the messengers change.

He was probably the first poet to write a Suprabhatam of any kind. We see it in the fifth chapter of Raghuvamsham where it is dedicated to King Aja. It became so popular that most of the subsequent Suprabhatam poems were composed in the same meter in which Kalidasa had composed his: Vasantatilaka.

Further, Kalidasa is the first one to describe a Swayamvara in detail. We see it during Indumati’s Swayamvara in the sixth chapter of Raghuvamsham. He is also the first great exponent of ornate poetry.

Our tradition celebrates ‘utthanadvadashi’ as the birthday of Kalidasa. It is one of only two dates he has mentioned, the other being the first day of Ashadha. The government of India issued a commemorative stamp to honor him in 1960.

The government of Madhya Pradesh has instituted the ‘Kalidas Samman’ award which is given every year to great achievers in the fields of classical music, classical dance, theatre, and plastic arts.

However, probably the best way to remember him is to understand what he really was. In my view, he was the first great urban poet but probably lived like a hermit in Ujjaini during the glorious days of the Gupta Golden Age. In other words, he was probably like those sages that were seen by King Dushyanta in the hermitage of sage Maaricha. 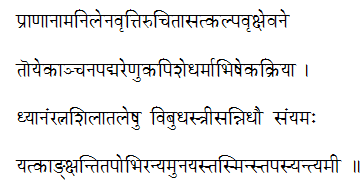 These sages perform penance under the all-giving divine tree Kalpavruksha; in the fine waters embellished by the pollen grains of gold lotuses, they just take their ritual bath; they undertake penance sitting on platforms made of the diamond, and they retain their composure and dignity in the face of extreme temptations arising out of divine women; these sages perform penance in the place which is the object of all penance.

On this note, I shall retire, inviting you to enjoy the world of Kalidasa in greater detail. I hope your journey would be as enjoyable and as enriching as it has been to me.