Vedas Not for Sati 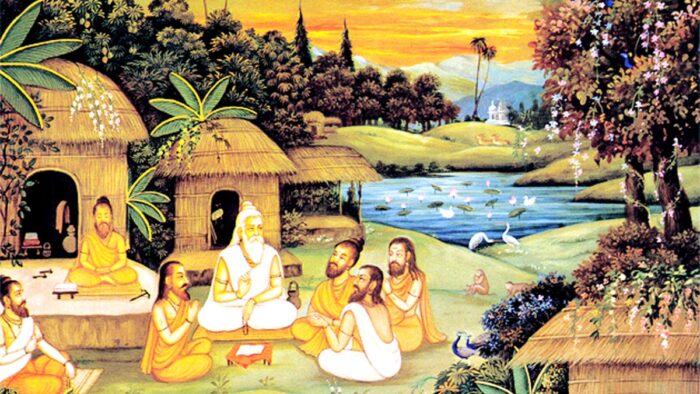 In the light of 14th century  Sāyaṇācārya’s commentary

I was watching the Amir Khan starrer movie Mangal Pandey (2005) few weeks ago. There is a scene that depicts that during the period of Mangal pandey – Sati was prevalent. The movie also shows an English officer preventing the carrying out of Sati practice and rescuing the lady who was allegedly taken to be immolated. Later, it is shown that the lady thus rescued, falls in love with the English Sahib.

While watching these scenes, having undergone training in the tradition Gurukula system in the Vedas and also having got introduced to śāstric learning – I was curious about what the Vedas said about Sati, though  readily I did not remember any injunctions on Sati in the Vedas. The question got lodged in my mind. The movie ended and many days passed. But the question lingered.

One day for my regular Vedic tweets[1], I was browsing the Taittirīya āraṇyaka with Sāyaṇabhāṣya (commentary by  Sāyaṇācārya). I happened to look into the 6th Praśna (chapter). I was shaken to see a set of five mantras (Taittirīya āraṇyaka 6.1.3.1-5) and the lucid commentary of Sāyaṇācārya (14th Century Vedic  Commentator) that answered my questions on Sati very clearly.

I was aware that the mantras in the sixth Praśna are used for funeral rites. But I never expected that it would have these five mantras and that too with such directness and clarity. They encourage the lady whose husband has passed away to live on, assume the wealth and status of her husband, remarry and continue the fight of survival in this world.

Taittirīyaśākhā (to which Taittirīya āraṇyaka belongs to) being an ancient Vedic text is certainly a text before the commencement of the common era  (hence the text is more than 2000 years old).

It is to be noted that of the five mantras discussed below – Mantra 1 found is also found in atharvaṇaveda saṃhitā  – (11.3.1) and Mantra 2 is found  in Ṛgvedasaṃhitā (10.018.008). Mantras 3-5 are unique to Taittirīya āraṇyaka as far as I searched.   Presence of the Mantras in the Saṃhitā texts pushes the antiquity of the mantras further deep into the past.

Sāyaṇācārya whose commentary is used to explain these mantras is from 14th Century, Vijayanagara empire.

The mantras and their Meaning

Oh! Departed one! This lady being desirous of attaining the world of the (you) husband is intensely staying in your proximity (near the dead body). And she follows (this) dharma of a (married) woman that is continuing since time immemorial (desiring proximity of the husband always). To such a devoted wife grant permission to stay in this world of living beings and also permit her to attain (your)(pre-existing) progeny and wealth.

1) It is clear from this Mantra that the wife follows the dead body of the husband not due to any pressure from the society but from the intrinsic sense of Dharma of a wife and also deep commitment to her relationship with her husband and the emotional bonding with her husband due to years of married life.

2) It is also clear from the tone of the mantra above that the others have the responsibility to make the lady respectfully turn away from the dead husband (and not force/encourage her to immolation- Sati).

3) From this Vedic mantra and the subsequent mantras it will become clear that the right of inheritance and also the custody/care of the children should rightfully belong to the wife and none can interfere. Further, as this mantra indicates pre-existing children, it implies that this mantra focuses on the wife who has been married to the deceased for at least a few years.

Word by Word Paraphrased meaning based on Sāyaṇācārya’s commentary

Hey Lady! You are lying near the body of the husband from where life has departed. Get up from there and come towards the world of living beings. Attain the status of wife of a man whose desires to hold your hand and marry (you) again.

1) There cannot be any more emphatic reference to remarriage of the widow from the Vedas.

2) It is also clear from the Mantra above that there is life and happiness in this world to the wife of a deceased. She is not required to go with her husband.

3) It can be noted that this mantra does not speak about progeny and inheritance of wealth but focuses on remarriage. Hence it can be taken that this could possibly be uttered to the newly or recently wed woman who has not given birth to child or she is issueless from this man.

Note: As can be seen from the description below, these mantras convey the same theme. Hence they are clubbed and explained together

Word by Word Paraphrased meaning based on Sāyaṇācārya’s commentary

Hey Lady! To attain wealth, Brahminhood, glow and physical strength – take the golden ornament (Suvarṇa) from the hand of the dead (husband) and stay in this world.

Hey Lady! To attain wealth, kṣatriyahood, prowess and physical strength – take the Bow (Dhanus) from the hand of the dead (husband) and stay in this world.

Hey Lady! To attain wealth, vaiśyahood, prosperity/nourishment and physical strength – take the precious stone (Maṇi) from the hand of the dead (husband) and stay in this world.

We are also there in this world enjoying the comforts here in. Compete/struggle with us (in attaining comforts/ in the journey of life) and let us overcome all the adversaries.

This mantra is very significant. It has so many progressive ideas millennia ahead. A symbolic act is advised as that of taking a golden ornament, bow and precious stone from the hand of the dead depending upon his Varṇa. As it is clear from the Mantra, this symbolic act is done probably –

1) To ensure the continuity of the social status for the woman in the same Varṇa as that of her Husband.

2) This physical memento from the husband in the form of- ornament, bow and the precious stone is very important psychologically. Later, at times of hardships and struggle in the absence of the husband, the lady by the physical touch/seeing of the memento can derive inspiration and strength.

How more thoughtful and psychologically and emotionally comforting can the Vedas become to a bereaved lady?

3) The last portion that is common to three mantras is at the same time pragmatic, motivating and comforting. The wording Let “us” in the first person plural indicates that we are all with you – it comforts the lady that she is not alone. It is motivating as it invites/challenges the lady to come and fight/compete in attaining happiness as others. It gives hope that all is not lost. Finally it is also pragmatic when it says – there will be adversaries, there will be hardships, emotional challenges – hence learn to fight it out.

4) One may have a question as I did, as to what happens to the woman who is not in the three Varṇas. As there is no mention directly, one is not sure. Still, as can be observed from the tone and tenor of the mantras – it can be clearly seen that if the women of the three Varṇas themselves, who are bound by so many rules, regulations and rituals can remarry, inherit and live on happily, then what remains to be said about the other classes where restrictions, rules, regulations and rituals are not very strict and minimal going by the textual evidences.

Coming back to Amir khan’s movie’s (Mangal Pandey, 2005) Sati scene, that was mentioned initially – the historic personality Mangal Pandey portrayed in the movie lived in the early part of 19th century (1827-57). Even, if we take the views of the movie to be true on Sati, then it portrays the status of women in and around 19th century.

But as seen in exposition above – 14th century Sāyaṇācārya is not hesitant/reluctant in explaining the views of the mantra.  Nor do the ancient mantras of the Vedias express any ambiguity in remarriage and non-preference to Sati and inheritance of wealth and social status by women from the husband.

Thus as a student of the Vedas and adherent of Sanātana Hindu Dharma, I got reassured that the Vedic teachings, Hindu culture, at its source, respected regarded women to a very great extent, a level which is unimaginable even to the so called liberals and progressives of the current day. Digressions and distortions (such as Sati) in our dharma, in its existence of many millennia, might have happened due to various factors. As insightfully observed centuries ago by Śrīśaṅkarācārya in  Gītābhāṣya –

Due to the gaining of upper hand of Adharma that is caused by increase of Kāma/desire and the resultant loss of viveka (discrimination) and Vijñāna (experiential wisdom) in practitioners (distortions and digressions might have crept in).

The right course then to rectify and root out such digressions and undesirable practices is not to condemn Hindu dharma and vilify the Vedas and the Śāstras. But to adopt the following approach –

a) adhyayana – to go the source – Learn the Vedas, Samskrita and understand the Vedic guidance (and not depend upon the books of the English/western Sahibs on the Vedas)

c) Developing Viveka and Vijñāna – And by anuṣṭhāna develop analytical thinking and experiential understanding of human life and live closer to realities of our times.