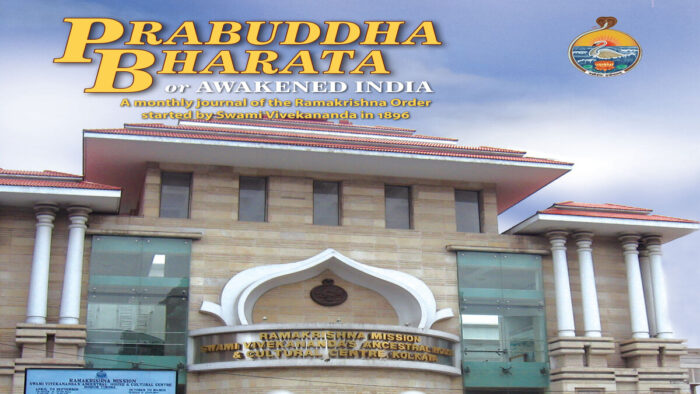 Started by Swami Vivekananda in 1896 to disseminate the core of Indian Spiritual Wisdom, Prabudhha Bharata celebrated 125 years of milestone and becomes India’s one of the longest-running English journals. The anniversary was marked by the Prime Minister’s address through video conferencing

It dates back to the Parivrajak days of Swami Vivekananda when he was unceasingly trying for the spiritual regeneration of this county. Traveling India across length and breadth in the late 1880s understanding our land, its culture, diversity and yes, its men, Swamiji realized that the one thing this Bhoomi needs to reinvent is its past spiritual glory that was lost into devastating invasions and the contemporary colonial rule.

That’s the reason Swamiji the preached potential divinity of man and put Indian wisdom on the foreign shores. No wonder Prabuddha Bharata, Awakened India, resonated with his mission. As we celebrated the 125 years of the journal, let’s dwell deeper to understand how the journal became synonymous with Swamiji’s Vedantic voice. 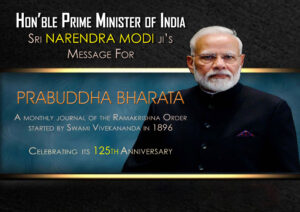 The 125th anniversary witnessed a virtual celebration that comprised the addresses of Prime Minister Narendra Modi Ji followed by Swami Smaranananda, the current President of the Ramakrishna Math and Mission, Swami Gautamananda, Vice-President of the Math, Swami Atmapriyananda, Vice-Chancellor of Ramakrishna Mission Vivekananda University, Swami Shuddhidananda, Adhyaksha, Advaita Ashram, Somenath Mukherjee, a scholar on the life of Swami Vivekananda and Sister Nivedita and Makarand Paranjape, Director, Indian Institute of Advanced Studies and other senior monks of the mission. [I]

Hailing the journal, the Prime Minister said it was started by none other than Swami Vivekananda.

“There is a very powerful thought behind this name-Prabuddha Bharata as he chose this name to manifest the spirit of our nation. He wanted to create an awakened India. Those who understand Bharat understand it is just beyond a political or territorial entity. Swamiji saw India as a cultural consciousness that had been living and breathing for centuries. He wanted to awaken the spirit and believe in ourselves that we as a nation can do great things.”

Modiji also referred to the letters written by Swamiji to Maharaja of Mysore and Swami Ramakrishnananda which spoke volumes about empowering the poor. He also highlighted the administrative policies which were in line with Swamiji’s vision.

While Mukherjee elucidated upon the historical development of the journal, Parajape recounted all those who had contributed to the journal-like, Swami Swarupananda, one of the earliest editors of the magazine Mr and Mrs Seviers, English disciples of Swamiji and Sister Nivedita to name a few. Swami Bodhasarananda, senior monk of the mission narrated the Himalayan task of taking out a journal at the Himalayan heights of Uttarakhand before the printing was shifted to Kolkata.

The story of Prabuddha Bharata [II]

In the pre-independence era, journals were great mediums of social awakening. When Swamiji was in the West, he wanted to start some journals essentially to carry the message of Vedanta in people’s language. He started three journals in his lifetime, Brahmavadin (1895) and Prabuddha Bharata (1896) in English, and Udbodhan (1899) in Bengali.

In spite of running Brahmavadin, which carried Sankrit articles during those days Swamiji felt he needed another journal which will carry the message of Vedanta in English and will make it popular in Europe and America. He explained it in a letter to Alansinga Perumal, Swamiji’s close associate who did pioneering work for Swamiji’s mission in Southern India.

In another letter, he suggested what Prabuddha Bharata stands for, ‘Give the society some non-sectarian name. I suggest ‘Prabuddha Bharata’ -— Awakened India -— and that name without hurting the Hindus will draw the Buddhists to us by the very name, [it] may mean pra -— i.e. with, Buddha Gotama -— Bharata, India, i.e. Hinduism with Buddhism.’ [III] This is how Prabuddha Bharata was launched in Madras in July 1896.

On the design, he wrote to Nanjunda Rao, ‘What I objected to in the design for the Prabuddha Bhârata was not only its tawdriness but the crowding in of a number of figures without any purpose. A design should be simple, symbolical, and condensed. I will try to make a design for Prabuddha Bharata in London and send it over to you. . . [IV] Swamiji further wrote to him in another letter about not making the journal scholarly as Bramhavaddin was already on similar lines. He rather requested him to make the journal simple as which spoke people’s language. This shows how Swamiji’s attempt to make Prabuddha Bharata a vehicle of mass awakening not only in India but in the West as well. 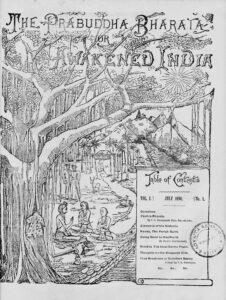 B R Rajaram Iyer, an admirer of Swamiji and Vedanta scholar became the first editor of Prabuddha Bharata and continued editing it till his untimely death at the age of 26 in June 1898. The magazine was defunct for some time. Life of Swami Vivekananda by his Eastern and Western Disciples, a biography of Swamiji, describes how much Swamiji loved this journal and tried to manage and finance it.

He wanted a journal or a paper for brother monks, disciples, and also for public preaching to talk about the ideals of Vedanta and also service. In the meanwhile, the journal was transferred to Almora with Swami Swarupananda as its editor and with Capt Sevier and Mrs Sevier managing it at the helm. [V]

This biography further mentions that the journal had over three thousand subscribers and Swamiji saw no reason to discontinue it. For the August 1898 issue, Swamiji wrote Prabuddha Bharata poem, Awakened India, the month in which the journal was revived. [VI]

In March 1899 the printing press was moved from Almora to the newly founded Advaita Ashrama in Mayavati. In the 1920s as printing technology was evolving, printing was moved to Kolkata. In 2010, the journal was digitised and now has been uploaded as an open-source repository.

Swami Chetanananda, a senior monk of the Ramakrishna Mission, recounts a story how tough it was to run and print the journal at the foothills of Himalaya. I heard the following story from senior monks: During the First World War, there was a critical paper shortage, and not enough paper could be found to print Prabuddha Bharata.

The magazine was about to be discontinued. Swami Abhayananda (Bharat Maharaj) was then in Mayavati. He walked 50 miles to Tanakpur and then traveled by train to Lucknow. He bought paper there, then returned to Tanakpur by train. He put the paper on the back of the mule and walked back to Mayavati. [VII]

Prabuddha Bharat has always been maintaining the erudite stature with scholars like Yadunath Sarkar, historian, Carl Jung, psychoanalyst, Lokmanya Bal Gangadhar Tilak, Sri Aurobindo. It is said that Dr Sarvapalli Radhakrishnan, first vice-president of the country looked forward to each and every issue of Prabuddha Bharata.

Swami Vireshananda, current editor of the Prabudhha Bharata, speaks about the journal in current contexts and future plans 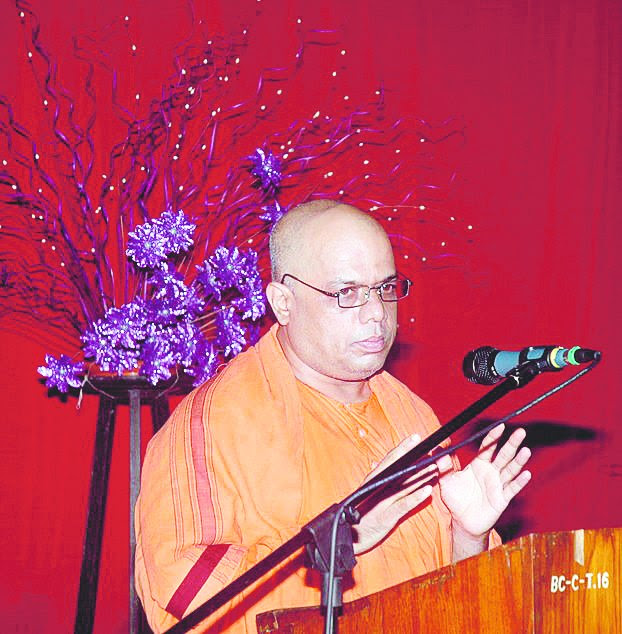 1. Your thoughts on the journey of PB for 125 years of celebrations.

Prabuddha Bharata is a great institution known for its commitment to core Vedantic values in their pristine form as illustrated in the life and teachings of Sri Ramakrishna, Holy Mother Sri Sarada Devi and Swami Vivekananda and also for endurance and resilience in the time of uncertainty and erosion of values. It has survived two world wars and stood firm in the vicissitude of time.

This great journal is serving humankind for the last 125 years, not departing even an inch from the lofty ideal given to it by its illustrious founder Swami Vivekananda. Prabuddha Bharata, as Swami Atmapriyananda rightly points out, stands for realizing the ideal by bringing out the relevance of Vedanta while what other populist magazines do is idealizing the real.

The 125 years celebration is an occasion to remember with gratitude all those pious souls who contributed towards editing, publication, printing, and distribution of the magazine for the last 125 years.

2. What makes PB more relevant today in times of Pandemic?

As you can observe in the August 2020 editorial and other articles published so far, we, in Prabuddha Bharata, try to draw the attention of the people to the importance of the eternal and universal spiritual values, adopting which, one can tide over the present situation of uncertainty and insecurity and live a meaningful life.

3. What are your plans to make PB more conversant with the language of the modern world keeping intact PB’s basic tenets?

We are trying to get articles from the young scholars on selected topics, which are more relevant and necessary in the modern context, not giving up our adherence to the core values of Vedanta. We are also trying hard to present noble thoughts to our readers in the contemporary style in a simple language. We believe that the Vedantic truths of the ‘unity of existence’ and ‘eternal freedom of the soul’, when interpreted properly, become very much relevant in any circumstance or period in the history of humankind.

4. How can PB disseminate Indic wisdom in the younger generation?

PB, being a scholarly magazine has to maintain its basic standards. Keeping this in view, we have already published articles of varied interests like the situation in the US during the pandemic, psychological effects of the Covid-19, etc. We have a section on current issues called ‘Notes and Comments’. We are also going to publish articles of contemporary interests like ‘Overcoming Anxiety’ by Swami Sarvapriyananda. Further, we have a plan to bring out a regular Youth section to attract the present generation to the life-giving message of Vedanta as explained by Swami Vivekananda.

5. There is renewed interest in Indic thought/religion however most of the studies in Indian philosophy take place at the varsities abroad. How can PB also play an active role in academics/scholarship as the journal has many scholars contributing to it?

Since many years, Prabuddha Bharata has been looked upon as the source of enlightened and authentic Indic wisdom and thought among intelligentsia throughout the world. We will continue to publish academic papers of excellent standard on the subjects we cover and disseminate Vedantic knowledge in its unalloyed form. We also have a plan to approach the universities both in India and abroad with the message of Prabuddha Bharata, which we will be implementing soon.

Prabuddha Bharata is a brainchild of Swami Vivekananda. It is the perpetuation of his mission of making every human being realize one’s innate divinity. However, it is now in the crossroads, due to rapid technological advancements and change in the mode of communication and dissemination of information. We are ready to face future challenges and move forward with an unflinching commitment to the ideals this journal stands for.