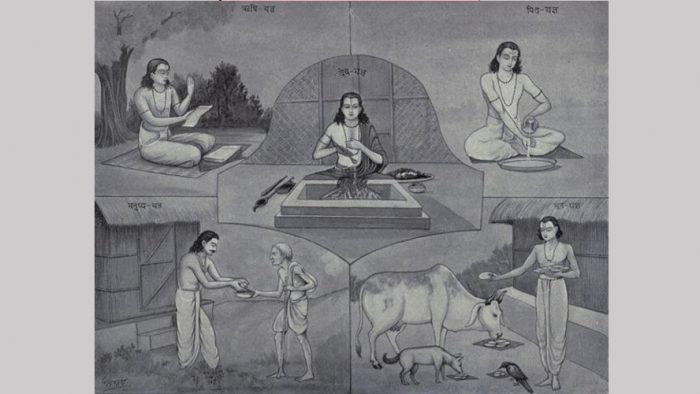 One of the most beautiful concepts in the Indian philosophical tradition is that of the Yajna – a sincere acknowledgement of all that we have received from the universe and it’s beings and in return, an equally sincere offering of gratitude to the world around us. Presented in the Bhagavad Gita as the axis upon which the harmonious functioning of the universe depends on, the Yajna makes us mindful of our actions and take ownership of them with the awareness that  every thought, word and deed of ours can impact the world around us.

The Panchmahayajna retreat organized by the Krishnamacharya Yoga Mandir(KYM) is a good opportunity to experience this tradition. The chants to be taught at this retreat will include select excerpts from Siksavalli, Sahavai Devanam and Chapter 3 of Bhagavad Gita, focusing on the five prescribed forms of Yajna. A session will be held on explaining the chants taught as well as Asana, Pranayama and meditative practices revolving around the central theme of Yajna.

Indic Academy is proud to sponsor three deserving participants willing to attend the retreat. If you wish to avail yourself of Indic Academy’s sponsorship and participate in the retreat, please write an essay on the Panchamahayajna and mail it to us at indictoday@gmail.com. The final day for submission of the essay is 31st October, 2018.

The participants should reach the Ashram by December 12th. The programme commences on 13th of December and ends on 17th evening. Participants can make their return travel arrangements on December 18th. Accommodation will be provided to all and simple vegetarian food will be served.

Krishnamacharya Yoga Mandiram (KYM)is one of Chennai’s most well-known yoga landmarks. Established by TKV Desikachar in 1976 as a non-profit Public Charitable Trust, KYM is among the premier centres of yoga and yoga therapy in India. KYM is recognised by Morarji Desai National Institute of Yoga (MDNIY) as one of the lead yoga institutes in India. KYM also has the SIRO (Scientific and Industrial Research Organisation) recognition awarded by the Department for Scientific and Industrial Research, Government of India, Further, KYM is recognised by the Health and Family Welfare Department, Government of Tamil Nadu. KYM is also one of the few yoga centres to possess the ISO 9001:2015 certification. Be it for general wellness, Yoga Therapy or Yoga Teacher Training Programs, or Vedic chanting, the KYM is well known for its holistic health promotive approach. KYM functions out of two locations in Chennai, Mandaveli and Kilpauk.