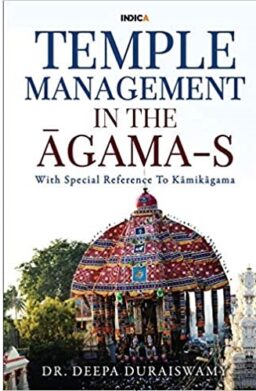 Something very creative flowers when concepts from one discipline are applied to an altogether different discipline. That is what evidently happened when Dr. Deepa Duraiswamy, who holds degrees in engineering and management from University of Pune and IIM Calcutta, respectively, applied the concepts of the modern management theory and practice to Shaiva Agama-s and came up with a doctoral thesis. That thesis has now been published as a book.

To trump the academic qualifications mentioned above, Dr. Deepa Duraiswamy comes from a long line of renowned and erudite scholars and practitioners of Shaiva agama-s, both on her mother’s side and her father’s. She stands, as it were, at the confluence of these illustrious streams of scholarship. She tells us that right from her early childhood she grew up listening to some of them talking about Shaiva Agama-s. No wonder, her doctoral thesis, now published as a book, glows with her passion for Shaivite Agamas, particularly, one called Kamikagama.

Shaiva Agama-s, the author tells us, are said to have originated from the five faces of Shiva to establish the four Purushartha-s, that is goals of human pursuit, namely Dharma (Morality), Artha (Prosperity), Kaam (Worldly Pleasures), Moksha (Spiritual Liberation).

These goals of pursuit, according to the Shaiva Agama-s, are to be achieved through the agency of temples. Agama-s codify everything to do with temples. What Agama-s contain is difficult to describe in a word or a phrase. They are partly DIY manuals, partly Standing Orders, partly compendiums of Corporate Policy, partly a Collection of Standard Operating Procedures. And a great deal more. Right from the selection of a place for a temple and evoking the spirit of Shiva to reside at that place to the economic and social welfare activities that the temple should enter into, through mundane matters such as what sort of naivedya (offerings) are to be made at the temple, everything has been codified precisely.

Lest one should conclude that Agama-s are basically ritualistic, the author has argued persuasively that interwoven with the various rituals are the practices such as dhyan, pranayama, dharana and so on that aim at one’s spiritual evolution. There is also a big stress on evoking the sublime emotions (bhava) during the worship.

One is elated to read that in worship at the temples, pararthpuja, that is, worship for the well-being of the universe, as distinct from that for the fulfilment of one’s own desires, has the most important place. The author says, “…..primary goal of temple management is to ensure pararthpuja is performed as prescribed adequately and with abundant dravya-s for the best benefits to society”. Earlier she has observed, “ just as a radio station can transmit waves across the world……..the tradition believes that pararthapuja transmits energy around the world…” This concern for the good of the whole universe is an essential part of Indic religions, which distinguish them from all others.

The author brings out in great detail and with corroborative evidence that all functions of management, as identified in modern management theory, were catered for in the Agama-s and were meticulously practised by those who manged temples. She shows that these functions can be classified in terms of modern management theory as core functions and support functions. The core group headed by the chief priest and assisted by two sets of assistants performed the core functions dealing with the worship proper. The support group took care of the material supply, housekeeping, maintenance, and general administration. And all this around 450-550 CE, which is believed to be the period when Shaiva Agama-s were written!

Agama-s laid down an organisational structure too. Adishaiva, or the chief priest, headed the hierarchy. He used to be initiated – or given the diksha – by a senior Adishaiva. In turn he gave diksha to the deserving. Agama-s give in detail many kinds of dikshas and ritual practices to give them. The adishaiva had to be at pains to keep his physical and spiritual purity and stay in touch with the spirit of the evoked deity.

Pragmatic to the core, Agama-s laid down remuneration for everyone associated with a temple. After all, man does not live by spirit alone. The author has mentioned different kinds of renumeration.

Temples had existed in India much before Shaiva Agama-s got written. However, creating a detailed code to make temples as instruments for bringing about personal and public good, in both worldly and spiritual matters, seems to be the genius of Shaiva (and perhaps other) Agama-s .

The author highlights the significance of temples in public life. They were social and cultural centres, where people gathered for administrative or other purposes. Fairs, festivals, art and academic contests were organised there. There, scriptures were taught and sculptors and decorators came and produced great artistic works.

Temples were economic hubs too. They provided employment to a large number of people: priests, musicians, bards, dancing girls, florists, cooks and what have you. In some communities, they were the biggest employers. Landless labourers had an opportunity to cultivate temple lands and keep a percentage of profit. Temples gave loans to village and urban bodies. 12 per cent was the rate of interests that many temples charged. Temple funded irrigation projects too for the good of the community.

Temples also acted as nuclei around which urban centres coalesced. They reclaimed many lands and made them more productive. In the Vijaynagara empire, temples were the biggest land-owners, next only to the emperor.

In the midst of dealing with all the various functions of temples, the author has very succinctly described the significance of temple as a place of worship. She says, “Universal energy is harnessed and established as the sannidhya of the deity………This energy is constantly replenished and maintained by abundant nityapuja, naimitticpuja and utsavas, so that devotees can absorb and benefit from divinity during darshan”. While on the subject of worship (Puja), an observation made by the author elsewhere comes to mind. She observes that during the worship (puja), the Acharya invokes and transfers massive amount of universal energy to the worshipper through mantras, mudras and so on. Thus, all in all, the author shows temples to have been very effective social and spiritual service organisations.

All in all, this book is worth a careful read for all those who are interested in the comparatively lesser-known Hindu canons.