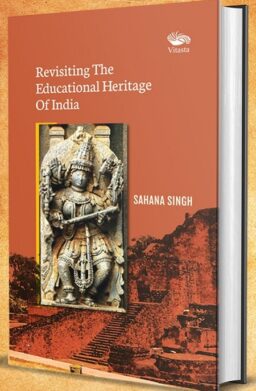 It is seventy-four years since we bade the British farewell. Yet, our decolonization project is still sputtering – a sad situation proven by the fact that a vast majority of Indians still profess gratitude to the British for our educational institutions! The seminal work “The Beautiful Tree: Indigenous Indian Education in the Eighteenth Century” by scholar Shri Dharampal using British records should have awakened independent Indians to our rich educational heritage and led to significant research stretching back to ancient India. However, that work is neither popularly known nor has that research been continued by our historians.

It has taken an engineer, Sahana Singh, to take it forward in the form of a well-researched, effectively organized, and powerfully narrated book “Revisiting The Educational Heritage Of India”. With over 250 pages detailing the higher education ecosystem with nearly as many citations, this book is a vital asset to modern India to identify and relate to the civilizational thread of its ancients.

Today, a child entering college evaluates their many options – which subject to specialize in, which top universities offer that specialization, who the renowned teachers in that field are, and what the career options are. Sahana Singh demonstrates to us that students in the early centuries of common era evaluated these questions too – Ujjain for astronomy, Vikramshila for jobs in government, Nalanda for its rich library and renowned professors, Mithila to study debate and logic, and Takshashila to study under Charaka and Jivaka, to name a few. This was not specific to only students in the Indian subcontinent, but also for those from far-off lands – China, Indonesia, Greece, Babylon, Persia, Syria, and Tibet.

Sahana begins the book with the emphatic declaration that ours was a civilization defined by education. Remnants of this focus are seen in the still extant traditions of vidyarambha/hatekhori, upanayana and samavartana ceremonies practiced in Hindu communities across India. The Upanishads also are replete with instances of knowledge seeking.

A fascinating map of Akhanda Bharata presents all the universities that are known to have existed – this writer was able to count over eighty with her middle-aged eyes. Sahana presents evidence that clusters of universities were formed around most sought-after ones for students who couldn’t gain admission to the top school. She cites evidence of schools like Vikramshila that came up as a rival to Nalanda, and even attracted professors from the latter.

It is also astounding to hear about scholars traveling across India to study or teach their subjects in a time with no transportation or hotels or communication like today! Sahana cites many instances such as Patanjali from Kashmir teaching at Pataliputra in the east, Brahmagupta from Rajasthan at Ujjain, and Bhaskara all the way from Bijapur in today’s Karnataka to continue the work of Brahmagupta in Ujjain, and Dharmapala and Dinnaga from Kanchipuram teaching in Nalanda. This was also true of students who were willing to travel far for knowledge.

While there is significant written evidence of Nalanda through Chinese students Xuanzang and Yijing, Sahana has taken the pain of searching and compiling information of lesser-known universities. Specifically, her research on the temple-based universities of southern India such as Ennayiram and KanthaloorSalai presents fascinating visuals on the agraharas, ghatikas and mathas where scholarship was developed under the patronage of kings and landlords.

Sahana delves deep into a few unique aspects of the common curriculum. Contrary to the common perception that these universities only focused on religious subjects taught by bare-chested, tufted gurus, the curriculum ranged widely from logic, statecraft, math, astronomy, medicine, grammar, and the arts.

Strikingly, Xuanzang, who ostensibly came to find original versions of Buddhist texts, ended up staying for five years studying subjects as varied as nyaya, shabdavidya, yoga shastra, dharma shastras, puranas, vedanta, Sanskrit grammar, jyotisha and chikitsa shastra. Sahana gives a glimpse into some of the scholarship – for example, the sophistication of the debating tradition with its fine rules and criteria for winning. She also outlines the development of math scholarship in the Kerala school as well as other vocational schools such as ayurveda.

Sahana delves deep into highlighting the holistic approach to education – a sore miss in today’s mark factories. The goal was man-making as opposed to creating mere intellectuals. The acharya had a role in inculcating brahmacharya, good principles and values through yoga, seva, and neeti shastras.

Further, she also sheds some light on the infrastructure and operations, supported by the patronage of the kings. The open courts, groves, ponds, and gardens in Nalanda that Yijing alluringly describes is a contrast to the concrete jungles that today’s colleges have become.

Sahana takes a slight detour to defend the allegations of patriarchy. While due to the responsibilities and constraints of that period, women were not present in large numbers in the universities, education was not denied to them. She mentions a long list of women from the Vedic/Puranic period to the pre-colonial period who were accomplished in sciences, philosophy, and literature. The seclusion of women and their being home-bound was a natural consequence of the Islamic rule.

The export of knowledge in the form of students as well as texts to Persia, Europe, China, and South-east Asia is well known. Sahana states many such instances which are clearly acknowledged by Persian and European sources but are strangely ignored today in academia and media.

Sahana cites the Arthashastra as advising that when new territories were conquered, the conquering power should protect the educational ecosystem in the conquered land and honor the scholars and students. That was the stark opposite of what happened in reality when the invaders razed through Bharata.

One barbaric Bakhtyar Khilji laid to waste three massive universities of that time – Nalanda, Vikramshila and Odantapuri. This destructive modus operandi of educational institutions continued as Muslim rule spread. While the Islamic invaders destroyed the institutions of higher learning, the colonial period eroded the village school-based education system. If Shri. Dharampal had not studied the British records and brought the robust school system to light, we would still be under the illusion that the British gave us education.

That glorious education system is all in the past. How does it matter today? Sahana brings all that ancient wisdom forward and lists out recommendations for today towards the end of the book. Some of her suggestions including making education holistic to build a child’s character, enabling learning in local languages, and using games, stories, and other pedagogies to effectively impart knowledge.

The need of the hour is to nurture intellectually sharp, mentally strong, and ethically grounded youth to lead the country into sustainable innovation, peace, and prosperity, and not churn out mindless, weak automatons with worthless degrees. Hence, it is a shame if education policy makers and educators do not leverage these time-tested approaches from our rich educational heritage. Let us hope they will.

Deepa Bhaskaran Salem is an Advaita Vedanta student and blogger/storyteller. She speaks and writes on Hindu parenting. She is a content and product marketer byRead more