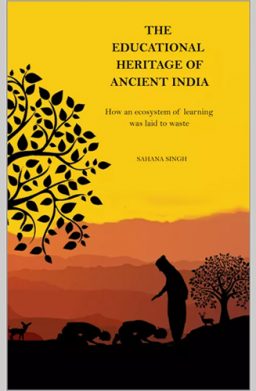 Book: The Educational Heritage of Ancient India: How an Ecosystem of Learning was Laid to Waste

During Swami Vivekananda’s 150 Birth Anniversary Celebrations in 2013-14, I happened to have an interaction at a National Institute of Technology. In the course of the same I asked the students an extremely simple question, how many of them were there for the love of studying xyz subjects. To my dismay – not a single hand went up! Further interaction revealed that they had opted for engineering because of various pressures –parents and relatives, peers, etc. An Engineering graduate is held in esteem, said one. Another said, they get better choice in whom they marry and yes, better dowry also. Yet another said it was for the job prospects. Did they love their studies? No, they replied honestly. Suppose the esteem and the money, etc were guaranteed and they  had a choice – what would they opted for, I asked. One said, art, another said music, a third one said teaching, yet another said, innovation, business.  True, there are more educational institutions, more opportunities, more universities, more courses than ever in our country. But on the flip side also is a very sad reality – India ranks highest in the rate of students from the age group of 15-29.

“A single generation enamoured of foreign ideals is almost enough in history to risk the entire continuity of civilization and learning.” (The Myths of Hindus and Buddhists, 1914, p. 2).

This has destroyed generations. It is high time efforts were made to understand what was the system which produced such genius,  that India dominated the world without lifting the sword. The key lies in education. No wonder, especially the nineteenth and early twentieth centuries saw savants such as Swami Vivekananda, Bal Gangadhar Tilak, Ishvarchandra Vidyasagar, Maharshi Aurobindo, Rabindranath Tagore make spirited efforts to rejuvenate Indian education along nationalistic lies.

Yet again we seem to have completely lost our way. In order to regain it,  clarity of our own indigenous system of education is required. Several such well researched books on India’s educational systems have been published. The latest in this happy comebacks is The Educational Heritage of Ancient India by Sahana Singh, an engineer by profession who  studies, works and writes on various issues such as Indian history, water management and environment.

For those who have read/ studied Dharampal’s  The Beautiful Tree this book, The Educational Heritage of Ancient India,  will certainly complement that study; for those who have not, this book will surely set the tone to read it.

In just 61 pages Sahana Singh packs her study, analyses and interesting and/ or little known facts about our educational system. No wonder that the book has earned excellent reviews by renowned scholars such as Dr Subhash Kak, Dr David Frawley, Dr Rajaram and Prof. Kannan.

The 7 chapter titles give the flavour. ‘Holistic Learning in the midst of Nature’, ‘Universities, Universities Everywhere’,  ‘Specialisation and Graduation in Ancient India’, ‘Education for Women’, ‘Fuelling a Knowledge Revolution outside India’, ‘Deathly Blow to Learning’, and ‘A Beautiful Tree is damaged’. In essence one can think of the book as in three parts – part 1 dealing with the details of the grand heritage of learning; part 2, the decay and the last one, Epilogue  which is an appeal to  recover of our historic legacy.

As the theme unfolds, every chapter has excellent illustrations and helpful sub-headings that adds to its readability.  The second chapter even gives the map of universities in  undivided India, titled ‘Ancient Centres of Learning in the Indian Subcontinent’. (I personally disagree with the word ‘Subcontinent’ in the context of India. Subcontinent refers not merely to the vastness but has the mischievous implication of containing several nations – a colonial construct that India lacked unity prior to the British – yet another baggage we could drop in the waste bin.)

The book begins with examples of how learning was encouraged in the lap of nature as well as in villages and towns. India was obviously the knowledge hub and people from all over the world made difficult journeys to study here.

Speaking about the high level of scholarship, Singh says how it was considered unethical to barter knowledge. Xuanzang (Hieun Tsang) notes the love of learning in India that was inculcated not by force but by planting the seed of curiosity. Teachers preferred poverty and travelled far and wide to share knowledge. Students were expected to be proficient in an amazing variety of subjects as only in-depth inter-disciplinary studies could help make significant contribution.

About surgery, Singh quotes various sources to show  how highly skilled Indian surgeons were. I was amazed to know of Jivaka who made a neat incision on the hairline and cut through the brain, parted the skin, removed two worms and neatly sutured the skin back in place! Singh’s use of the word ‘Professor’ with several of these renowned teachers is really exhilarating.

Nalanda was for quite a long time one of the most famous universities but even in those days admission standards were stringent. Barely 20% made it through the entrance exam that was a little more tough on foreigners – and yet the University had 8500 students and 1500 teachers! The cost of such a vast establishment was met by the revenue of a 100 villages. Subsequent kings also used to grant endowments. The idea was that the learning would benefit the society – not like today – that students get highly subsidized higher education and more often than not keep the benefits of their study  (earnings) to themselves.

While all chapters are edifying, I was specially keen to know about ‘Education for Women’. As per the Atharva Veda  an uneducated woman was a huge disqualification. In fact the expectation was that women will shine through their knowledge even in the Assemblies. This gives a lie to yet another canard that in ancient times women were not allowed to study. Swami Vivekananda had specially requisitioned Margaret Noble (Sister Nivedita) to work for the education of women in India that this great land will once again produce Rishikas such as Gargi-s, Maitreyi-s.

The Chapters ‘Deathly Blow to Learning’ and ‘The Beautiful Tree is Damaged’ make for extremely sad reading. The damage caused by Islamic and British (Anglican) forces are truly unfortunate not just because it destroyed thousands of years of painstaking research, knowledge and wisdom – but also because this knowledge was stupendous and was available for genuine seekers from all over the world.  Even commerce was not merely for trade of goods and minting money but to share values and knowledge systems. No wonder India dominated the world for centuries.

The Epilogue is a clarion call to stop the ‘willful distortion of history’ and recover our legacy not by mindless aping but by going into the fundamentals. Why was it that India had become the knowledge hub? It was because of its quest for Truth. The last sentence is the challenge:  “It is time to face the Truth about our past so that we can move on.” (p.61)

We look forward to more such eminently readable works from this scholar. Books such as these help us connect the dots in our history and  re-claim India’s Grand Narrative.