Review of “The Sarasvati Civilization” by Maj. Gen. G.D. Bakshi 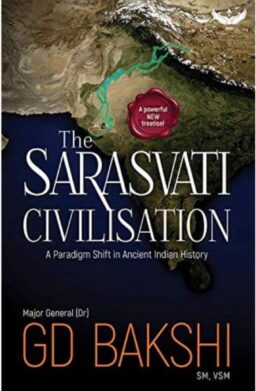 “It was not just a river – it was a stream of consciousness, it was the stream of knowledge, the Indian goddess of wisdom and learning. Its loss led to an atrophy and decline in the Indian civilization which would never be the same again. This was the decline of the Rig Vedic civilization and its seminal values.”

“The Saraswati Civilization”- Maj. Gen. GD Bakshi’s painstakingly researched masterpiece is a highly engrossing and conclusive book. Shri GD Bakshi has adopted a multi-disciplinary approach and has employed about half a dozen methods to prove the existence of the once-mighty river, and with over a hundred references, it seeks to set the stage for further discussions on this topic. The book is very comprehensive, does not delve into too many technical details, and it is perfect for a layman and expert alike.

One might think that the first point naturally implies the second but that is not the case. Since the last few decades, a humongous amount of work has been done by historians and several scholars to disprove the Aryan Invasion Theory.

Unable to ignore this prominent fact, the present education system and academia, although dominated by Marxist and post-modernist neo-colonial narrative, do not mention the AIT or AMT. But this is far from something to rejoice about. Why?

What do our school textbooks say?

Although there is no mention of AIT explicitly, the narrative that was built as a consequence of it retains its place in textbooks. The books bluntly state that-

In fact, one of the major criticisms by critics of the supposedly saffronaised textbooks brought under the Atal Bihari Vajpayee government was regarding the fact the Indus valley and Indus-Saraswati civilizations were considered the same. [3]

While the overbearing amount of evidence unearthed in the later part of the twentieth century against AIT/AMT forced the Indian Academia to remove it from the mainstream syllabus, Shri GD Bakshi’s work of compiling all the evidence of the existence and disappearance of the Saraswati river indeed is instrumental in reasserting the fact we indeed belong to the continuing and ever-evolving Saraswati Civilization.

In the fifth chapter (“Cultural Continuities”), he gives several examples of cultural continuity that can be established with the help of terracotta figurines. Now, it is no longer the discussion about the identity of a single Pashupati seal but many such examples.

In fact, not only are cultural continuities found in terms of the habits and traditions of people but also indicate the existence of yogic culture, so distinctly visible in the figurines.

It may surprise many that standard school textbooks do not even mention the river Saraswati. It is conventional for textbooks to state that we know not of what happened when the Harrapan Civilization supposedly collapsed.

They assume a temporary state of a non-conclusive state, question every evidence, and at the end declare that none of them are of any value and that we cannot conclude anything. They say that the drying up of one river cannot be the reason for an entire civilization to collapse. [4]

Such new evidence about the might of the Saraswati River, the major dependence of Harrapan villages on it, and the dramatic shifting of the courses of the Yamuna and Sutlej contest the argument of the textbooks.

Narrative through the Indic lens

One of the best take-aways from the book is the importance of an indigenous point of view and approach to research. Traditional Indian academia, regardless of the age or language of the source, when in conflict with a foreign source of history, declares the Indic one as of inferior value. The reason often stated is that they talk of supernatural events that defy the laws of science. [5]

However, In the seventh chapter, Shri GD Bakshi amazingly provides parallels between the symbolism and literal meaning of our scriptures and evidence from other disciplines. This kind of work opens a new challenge to the Indian academia – the time-honored practice of dismissing every indigenous work as ‘myth’ and of ‘inferior’ historic value.

Having quoted verses from the Vedas to a great extent, he concludes-

The life and times of the mighty Sarasvati river are thus reflected in the progression of the Vedas. The Sarasvati is still sacred by the time of Atharva Veda, but clearly in the interim, the river has declined markedly in its flow, volume and size. It is fast becoming a memory of the ancient ones–the ancestors. It is fast becoming a racial memory of a once very mighty stream. It is a stream that is most intimately linked to the ancestors of the Aryans. The original Aryans, the progenitors, were the Sarasvats—the people who lived on the banks of the Sarasvati.

He also describes in detail Balarama’s pilgrimage as described in the Shalya Parva of the Mahabharata. A journey along the banks of a dying river, he talks about lands that have been experiencing a very prolonged drought.

The Balram pilgrimage, however, chronicles a very melancholy age of civilizational rivers dying and an impending Armageddon of frightening proportions. This is precisely the condition that would impel an exodus of people, not an influx. So a migration of the Indo-Aryans into India in such a period of eco-catastrophe and large-scale warfare makes little sense. Why would hordes of people rush into an area that is facing such a major eco-catastrophe that the population on its banks has just been forced to migrate? This is a logical absurdity and highlights the fallacy of the imposed colonial narrative.

Another very interesting point is that of the Soma. A very important plant and highly eulogized in the Rig-Veda, it might serve as an important clue in establishing the identity of the Indus-Saraswati Civilization as the Vedic civilization. After several terracotta figurines have been found to feature huge mushrooms decorated as a crown around the head of a female goddess of fertility, he says-

The discovery of the Divine Mushroom motif in the terracotta figurines of the Harappan civilization provides an astonishing clue into the true nature and identity of the Harappan civilization per se. The Harrapans knew Soma, an archetypically Rig Vedic concept, and represented it in their art and symbolism. This notches up yet another striking similarity between the so-called Indus Valley tradition and the Rig Vedic culture

Moreover, sometimes, subtle points and trivia completely change the perspective in which things are viewed. For instance, the Bogazkale clay tablet (1380BCE) invoking Vedic Gods or the fact that Mehrgarh was five times in size and population of its contemporaries are not popular but interesting facts.

This is only the beginning

This is one tiny drop in the huge ocean of established narratives and theories that need to be countered. Centuries of colonial histories and decades of the post-independence politically motivated curriculum in India has made history education a joke in India. Indian historians tend to mix up the evidence with their opinion.

GD Bakshi says that it is important to be objective and true to ourselves. He puts forth several questions that he discusses with this approach and also proposes that a Copenhagen style convention is necessary in the field of Indology.

But it is also important to remember that along with objectivity, dialogues on narrative and perspectives are equally important. Why? Over the past decade, as we the Indian Right have majorly campaigned and challenged the mainstream academia on the grounds of facts, they have responded by silently replacing the curriculum with their narratives and perspectives leaving no space for discussion or counter-viewpoints. [6]

Therefore, a home team to initiate, establish, and promote indigenous narrative and perspectives is the need of the hour to hit the nail with a hammer and not a screw-driver!

We live in an age when most millennials suffer from an identity crisis and the Indic society is in greater need of consolidation and leadership than ever before. Research and dialogues on the Saraswati River, I believe, will prove fruitful to address these issues in our quest for civilizational identity- a quest to find our history.

To quote from the book “… as the pieces of the jigsaw were pieced together, the Indians began to uncover a past of a lost civilizational glory; of great antiquity, sophistication and above all an astonishing degree of cultural continuity and persistence over time and space. India has a heritage that comes unbroken from the remote past to the current era. India is beginning to discover its lost sense of self”

The Sarasvati Civilization is available on Amazon.

PS: This book was received as a part of the IBC’s Thousand Reviewers Club. A big thank-you to the Indic Book Club and Indic Academy for sending this amazing book.

A teen, an aspiring lifelong learner, and currently a student of technology at IIIT, Srinidhi is passionate about History, Mathematics, Carnatic music, and Sanskrit. SheRead more