The OM Mala – Meanings Of The Mystic Sound, by Nityanand Misra 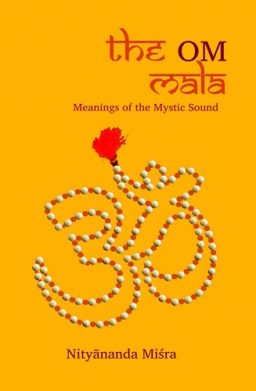 The meaning of the word Om is not something most of us ponder over. Om is a sacred incantation, a symbol, a mantra, and more to countless believers. But the word is a lot more. Its meaning and significance is beyond the mere word or the sound or the symbol. Nityananda Misra’s book, “The Om Mala: Meanings of the Mystic Sound”, brings to the lay reader, perhaps for the first time, all the myriad meanings of this wondrous word.

In the author’s words, “This book presents eighty-four names of OM and their meanings in accordance with multiple Sanskrit texts including not only Hindu scriptures but also secular texts like dictionaries, poems, plays, and treatises on music, grammar, and Ayurveda.” These eighty-four names are explained in 109 beads – 108 chanting beads and one sumeru bead, each bead taking up approximately two pages each.

Perhaps the most common meaning of OM results from the rules of grammar itself, where the word OM is the result of three sounds coming together under the rules of sandhi – to mean Brahma, Vishnu, and Shiva. OM is “also known as tri-daivata and tri-daivatya.” In this context, the root div “means ‘to shine’. Therefore, the names tri-daivata and tri-daivatya mean ‘having three shining gods (Brahma, Vishnu, Shiva).” This is followed by quotes where OM is used in the specific context. For example, the Markandeya Purana says – “OM is Vishnu, Brahma, and Shiva“, or that “OM is known as tri-daivata. OM is also called tri-daivatya; as it is Brahma, Vishnu, and Shiva” – from the Yogi Yajnavalkya Smriti. Then there is an “etymology” and a “tradition” section that tells the reader more about the context in which OM has been used.

Or that the Devi Bhagvatam and Bhagavata Purana refer to OM as the “seed (source) of the Vedas” – brahmabeeja, vedabeeja?

Or my favourite, found on page 84 – OM means “1 indestructible 2 imperishable, undying 3 liberation 4 syllable 5 letter 6 atman 7 Shiva 8 Vishnu 9 Brahman.” The Gita says, “Of all speech, I am OM – the chief akshara.”

You can turn to any page and find yourself enlightened and informed by an aspect of OM that you may have not known, or may have suspected but not verified. At two pages for each meaning, this book is perhaps an ideal bedside companion, to be perused for a few minutes each night, before going to sleep, so that one’s dreams may reflect on the holy, the noble.