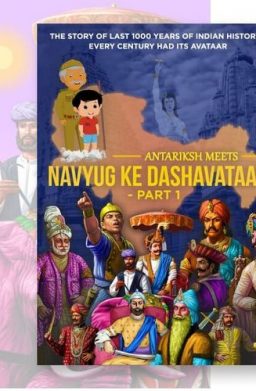 India today seems to be a country with a history, but not a past. While we are largely familiar with what has happened in the last century or so, a lot of what has gone before that eludes us in our history books, our literature and arts, and in our collective consciousness.

Like most Indians, the members of Ithihasika also grew up gleaning the missing pieces from their grandparents, parents, and of course the ubiquitous Amar Chitra Kathas. They can now be described as a modern era Uncle Pai, the creator of Amar Chitra Katha, recounting the stories of Indic heroes in animated form.

Two years ago Ithihasika made a basic animation movie on Shivaji Maharaj with a paltry budget of $400 to solicit donations for a museum of Indian history to be built by Indophile Francois Gautier in Pune. The production team expected 1000 views for the movie, and today they are euphoric at the 5.6 million views it has had without a marketing budget. A thumping endorsement that spurred them on.

Ithihasika’s latest offering is a 93 minute-long move called Navyug Ke Dashavatar. It took two years to recreate 1000 years of India’s past seen through an Indic-centric lens. Each century is identified with one hero or avatar. The stories steer clear from the clichés, the jingoism and the colonial hangovers of most children’s books of today. “This is a basic animation movie and we only had 90 minutes to focus on heroes through whom we tell the story of India. But even within this time frame and budget limitation we have tried to make sure that the illustrations of the general ambiance, clothes, architecture, weapons and other details reflect the reality of the times we are seeking to portray.”

Ithihasika spent around $18,000 for animation, voice over and sound work. The crowd-funding received made possible $150 per minute of animation when even the most basic studios today cost $ 400, with larger professional studios costing as much as $2000-$4000 per minute. “Our crowd funded budget was hardly enough. So we are really proud to have successfully completed this project. It took a lot of people coming together to make this happen including AFX animation, Mukul Goswamy for voice over and Ansh Rajput for sound.” The raison d’être of the movie is – ‘Story, story and story’. Made on a tight budget with little to spare, high-end graphics and special effects had to be given a miss. “We relied on a tight storyline to keep the movie entertaining and informative. So this version is all about the story.”

The one and half hour animation, is based on the experience of 12 year old history buff Antariksh when he meets Chowkidaar Bharat. Bharat is the unassuming watchman of the school who gives Antariksh time travel glasses. Navayug Ke Dashavataar tells the story of India through 10 monarchs each compared to an avataar of Vishnu. Part 1 includes history from Mohammed Ghazni’s invasions, Rajendra Chola, Jayasimha Siddharaja of Solanki empire, Mohammad Ghuri’s Delhi Sultanate, Rana Kumbha of Mewar, Kapilendra Deva of Kalinga, Krishnadevaraya of Hampi, the Mughal Empire and finally Shivaji Maharaj.

Apart from the thrill of recreating historical events and characters, Ithihasika’s team was deeply bothered by the imbalance in historical representation in school text books. “Each Mughal emperor has one entire chapter dedicated to him in our history text books, but the Vijayanagara Empire that spanned most of South India for almost 400 years hardly finds a mention. There is a total asymmetry of information. This is just one example and there are dozens of biases like this. And this needs to be corrected.”

To compound the abject distortion, is the portrayal of Bharata in terms of the losses and the incursions suffered at the hands of foreign invaders. “The mainstream narrative of Indian history focuses almost exclusively on our civilization’s losses and disconnects history from Indic culture, thus making it a dry and boring set of defeatist facts. We want to change this as there is so much more to our history. There are so many interesting stories and so many cultural nuances. These stories need to be told to the world and that is our mission.”
History buff themselves, the team have created a large collection of original history books in digital format and have uploaded them at – https://factmuseum.com/free-rare-books/. The voluminous information from history tomes and internet resources were crystallised into a format attractive to youngsters.

(The current movie is 93 minutes long. It is available in both Hindi and English with subtitles. Please enter promo code NKDFREE after going through steps for regular purchase & Vimeo provdes for free watching of the movie. Some Hindi content is also available free on the Vimeo channel.)