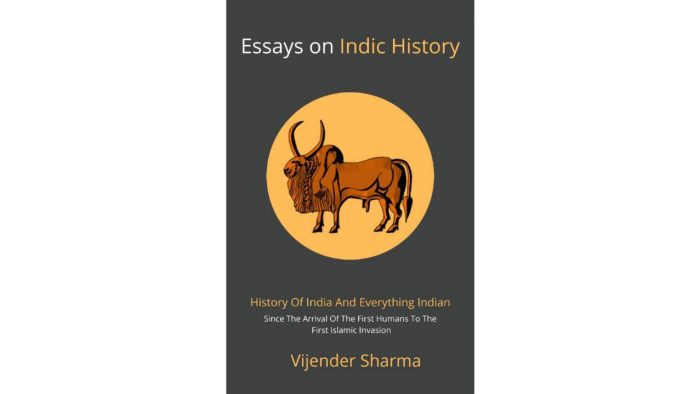 History of India and Everything Indian: Since the Arrival of First Humans to the First Islamic Invasion

Most of the books on Indian history make us feel separated from her past, a separation caused by the loss of language that came with colonization. Vijender Sharma in his new book has outlined several facets of Indian history which are either airbrushed or blatantly ignored. Maybe a transvaluation of Indian history could help in calculating the incalculable contribution India has made to the world. Following is a conversation with the author, who is a business consultant, as well as excerpts from his book “History of India and Everything Indian.”

What are the most authentic sources of Indian history that you referenced?

Researching the topics was the most tedious task while writing the book. Though the internet makes it easy to look up information, it also throws up a lot of irrelevant and unreliable information. I have been reading history for almost a decade now and hence had a fair idea of reliable sources.

I tried to rely on primary sources of information where ever possible. But it was not always possible to do so. Many primary sources were in languages I don’t understand. In such cases, I relied on original translations. In the book, I quote references from historians like Sita Ram Goel and Michael Danino, academics like Nayanjot Lahiri and contemporary writers like Sanjeev Sanyal. I also refer to the works of Archaeologists like Dr. S.K Manjuk, Dr. B.B Lal, Dr. Mani, and Dr. Amarendra Nath who did fieldwork and have first-hand knowledge of the findings.

What are the hurdles you faced in tracing Indian History?

The primary hurdle I faced during the research was my day job. Being a business consultant leaves very little time for one’s own pursuits. The paucity of time was the biggest hurdle. It took me a little more than two years to complete the research and writing.

The other hurdle was that of finding primary sources and original translations. This meant sifting through many documents to find that one piece of information I was looking for. At times hours of research would lead me to a document but it would turn out to be insufficient. Negotiating the maze of archive portals was definitely a challenge.

Another aspect was the constant flow of new information. In the two years that I took for writing and research, some major breakthroughs happened. The discovery of a war chariot in Sanauli being the biggest. Such new discoveries and information can potentially render an entire essay obsolete. After I finished writing, I had to go through the entire book all over again to look for sections that may require an update.

You have covered a vast canvas of influence both in India and from India. Why did you choose this period you have stated on the cover?

My book covers the period from the arrival of early humans up until the first Islamic invasion. There were two reasons to cover this period. The first was the relative paucity of the non-political history of ancient India. Though there are books on ancient India, they usually cover the political history of India. I wanted to touch upon the areas which are otherwise covered in bits and pieces and are scattered all around. I wanted to bring them together into one book.

The second reason was to bring forth the Indic thought and make it accessible to people, especially young adults. By Indic though I don’t just mean philosophy and religion. It is a bouquet of arts, literature, science, mathematics, language, etc.

Throughout our academic life, we have been taught about the empires and genealogies of kings, their campaigns, and revenue models. All this makes history a bit boring. Many times people do not even relate to what is being taught. I wanted to talk about things that people can relate to. Hence I chose the period of ancient Indian history which is full of some spectacular achievements. Those achievements are still bearing their fruits and we as a society still benefit from them.

Most accounts look at Indian history in a linear fashion as if the whole country went through the same influences. How do you see it?

I do not agree with such linear presentation of history. India is simply too large a geography to be shaped by a common influence. If I may add, we as Indians have never accepted uniformity. This stubbornness has been our greatest strength.

I would like to quote an example from my book here. We all know about the expedition of Alexander across Asia and his battle with Porus. During his campaign Alexander managed to ravage the entire Persian Empire, bringing it under Hellenistic influence. In the case of India, not only was his campaign stopped by Porus but places a few hundred kilometers from the battle site could not be Hellenised.

What I am trying to say is that throughout history India and Indians went through different sets of influences in politics, culture, religion, language, etc. and this shaped our expanded, all accepting Indian mind.

Till today there have not been resolutions to some issues, to India’s satisfaction especially in the field of Indology. What will it take to change the narrative?

There are indeed some issues that have got caught in controversies. The Aryan question, the Aryan-Dravidian divide, and Vedic history are three prominent issues that I think are not resolved. It is unfortunate that some historians have turned these issues into political and ideological battles instead of academic discussions.

Though the popular Aryan Invasion Theory has now been watered down to Aryan Migration Theory, the question itself still remains. The issues related to the Aryan-Dravidian divide and Vedic history have their roots in the Aryan question. For us to resolve these issues or to change the narrative, we have to rely on scholarships and new evidence that has come up.

At the same time, we have to bring in the element of objectivity in the academic circles. The teaching content should provoke students to ask questions and examine different hypotheses. They have to be taught how to think, instead of what to think. I think it is time to introduce new thoughts into our history syllabus at schools and universities.

It is going to be a long exercise, but without a change in the academic approach, there is little hope that the narrative will change.

You talk about India’s contribution to different fields. Why has India not been acknowledged to be the source in some areas?

It is sad that a great civilization like ours is still not acknowledged for the immense contributions it made to the world. The reason for this is complicated. While researching on various contributions of India from storytelling to astronomy, I was surprised that the medieval travelers and polymaths who translated Sanskrit works into Arabic, Persian, and later into European languages, gave due credit to India and Indians for creating those masterpieces.

I think it was during Colonial times, with the advent of the western education system, that a lot of things changed. This was the time we started reading about the inventions and discoveries during the industrial revolution and we forgot about the early pioneering work Indians did. The books, all most exclusively, taught us about the modern sciences and literature and ignored the Indic aspects altogether. This was not surprising since as a colonial power the English would do everything to appear as more advanced than the natives to legitimize their oppressive rule.

But the real failure that led to the total disregard of our achievement was our education policy in the early years of the Republic. That was the time when we had the opportunity to put things straight. But we missed that opportunity. Then there was the powerful Marxist approach by the academicians in the latter decades. This meant that talking or acknowledging our own achievements was seen as regressive and ‘nationalist’. I think this was the most unfortunate development that robbed the latter generations of our glorious past.

What are the aspects of Indian soft power that are to be nurtured and promoted more?

Today we live in a very different world. The concept of soft power has changed completely from even a decade ago. Yoga was the ultimate soft export from India to the rest of the world in the twentieth century, then came Bollywood. Both have reached a point of saturation. In the twenty-first century, we need to explore the alternate mediums of export of soft power.

We need to partner with universities, civil society, tech firms, content creators, influencers to reach out to the world. The attention span of people has shrunk considerably because of information overload. We need to talk to the world in the language they understand and within a time span, they are willing to spare for us.

Having said that, one area of conventional soft power that still can be leveraged in the field of Indology and Indic Studies. We need to create these centers of Indology and Indic Studies, which should be seen as the ‘go-to’ place if one has to study India or anything Indian. This is an enormous task and requires benevolent philanthropists who would fund these institutions.

Do you talk about the forces that have broken India in modern times? Are there the same as in the past?

The book doesn’t cover modern times, hence there is no reference to the break India forces. But this is an interesting question. I can say that one reason why the ancient period was different from the medieval period was the absence of these break India forces. This not to say that India did not face any adversaries in ancient times. We know that from the Greeks to the Kushans, to the Persians, the Huns, all invaded India. Some settled down in India for long while the others like the ancient Persians made little impact.

All through these invasions, the invaders invariably integrated with the Indians and did not try to impose upon them a different cultural identity. This changed with the first Islamic invasion. Politics and warfare were no longer about assimilation or cultural integration.

What do you think will excite readers about the book?

The early feedback that I got from some readers is that the book dispels a lot of popular myths that are taught to us.

As I said earlier, conventional history gets boring for readers because they at times do not relate to it. I have divided the book into essays so that it doesn’t become one long chronological account. Each essay is like a candy that can be enjoyed on its own. One can pick up anyone’s essay to read.

Another thing that I introduced in the book is drawing parallels to modern times. There are so many things that we do and observe today, which are directly linked to our past, sometimes as far back as 5000 years ago. These references will make reading history interesting even for someone who is not academically inclined.

Essays on Indic History: History of India and Everything Indian is available for purchase from Amazon.