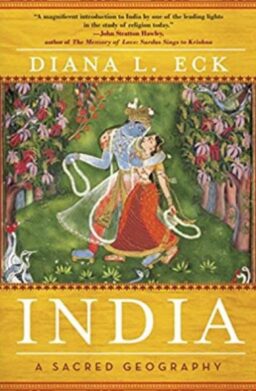 You don’t read these words often, especially from an academician;

“This idea of India had its genesis long before the Mughal Empire.”

It is even rarer to see it followed by, “The one clear unity which India has possessed throughout history has been geographical.”

Historians and academicians have told us repeatedly that India owes its geography and identity to the Mughals and the British. Diana Eck argues that India has always been there, as the geography that was marked by pilgrimages and sacred spots.

Diana Eck is a Harvard professor of Comparative Religion and Indian Studies. She has authored many books on spiritual practices in India. She very clearly states what her book, “India, A Sacred Geography” is about. “This is a book about the ways in which networks of pilgrimage places have composed a sense of location and belonging – locally, regionally, and trans-regionally,” or how the Idea and Geography of India are shaped by pilgrimages.

The book is a rare acknowledgment that India has always been a civilizational entity. Calling it an amorphous or artificial collection of people and culture is incorrect, and it comes out of ignorance.

She makes a graphic and convincing case. The central theme is argued well in the first chapter, and buttressed with quotes including from several academicians. She argues against the academic theory that India is a creation of the British Empire. She argues that the concept of India has been there forever; manifests in the pilgrimages.

She argues that countless millions of pilgrims have articulated their idea of the land, location, and belonging through pilgrimages. She argues how pilgrimages and places of worship marked the sacred sites of India and how they defined its boundaries. She even argues that this way of articulating a land and landscape is far older than the modern nation-state concept.

She illustrates how India was described to Alexander as a single land, how geographies have been united by pilgrimages like Narmada Parikrama and Pandharpur Yatra.

The rest of the book provides a grand illustration of the physical evidence for the theme. She starts with how sacred places are multiplied across the country and how they serve as markers of the geographical identity, the char dhams, the 51 shaktipeeths, the 7 sacred rivers, the 7 cities of liberation, the 12 Jyothirlingas etc. She then illustrates how the stories of Mahabharata and Ramayana integrate the geography of India and provide a shared identity; how the worship of Shiva Shakti and avatars of Vishnu unite India.

She discusses a number of themes that unite geographies, like island shrines of Vishnu, PushtiMarg of Krishna, 108 divyadesams, the five elemental lingas, the six abodes of Karthikeya, the concept of Panchakroshiparikrama, etc. She quotes from extensive personal travels, puranas and the sthalamahatmiyams.

Anecdotes, local practices, geographical details, and spirituality flow page after page in her book. The narrative is light (though it gets repetitive in some places), not academic at all, and very interesting to read. The chapters are well organized, each about one theme (e.g. Rama worship).

Even for veteran pilgrims, the book provides, in one place, a compilation of the places of pilgrimages of India. For the unaware or the sceptic, the book is a grand commentary on the spiritual and pilgrimage tradition of India.

While the central theme is cogently presented, she does not credit earlier proponents of this theme adequately. An Indian author would be straightway accused of plagiarism. Radhakumud Mukherjee wrote about this theme in 1914 and presented his arguments and evidence. He even titled his book “Fundamental Unity of India.”

She does not credit the core theme of her book to him, even though he claims the theme in the title of his book itself a hundred years ago. As an academician, she cannot risk ignoring his books, so she gets away with a perfunctory reference to the work, tucked away in notes or in secondary details.

Her first reference to him is not by name, but by the now pejorative label “as one Hindu nationalist writer put it…” Contrast this with her reference to another Indian historian as “Indian intellectual historian RajatKanta Ray. ”

For Diana, Radhakumudji is not an Indian, he is a Hindu; he is not an intellectual and a Padma Bhushan recipient, he is a “nationalist;” he is not a historian, he is just a mere writer. Her first reference to Radhakumud Mukherjee is not to his book of 1914 but to his writings of the 1920s. He is referred first by name in the second chapter, after 61 pages.

Her two references to him by name in the book are with regard to river hymns in Rig Veda and PrithiviSukta in Atharva Veda. Another work of V. Rangaswami Aiyangar in 1942 also carries the same theme. The acknowledgments in her book are technically sufficient perhaps, but lack sincerity. Contrast these with her words for Sheldon Pollock – “As Sheldon Pollock has so masterfully demonstrated…”

She is also unable to hide the Hinduphobia in her writing. She presents modern Hinduism as a practice inconsistent with tradition and makes a poor case citing the Ayodhya dispute as an example. She argues that the Ramjanmabhoomi dispute is incongruous since Hindus have a practice of replicating sacred spots. She seems to be saying, why are you worried about the birthplace of Rama, when you can easily create 4, 8, 12, or 51 birthplaces of Rama elsewhere as you do for Shakti Peeth?

What she really means is, since Hindus see all earth as sacred, they lose the right to any spot that is specifically sacred to them! She also alludes that one reason for the delay of twenty years in the publishing of the book is the way the theme resonated with the “newly empowered confrontational Hindu extremism” that she found deeply disheartening.

Her compilation of opinions on Ayodhya is blatantly one-sided. She extensively quotes left historians. She conveniently omits any reference to the ASI findings (cleverly referring to them as archaeologists and not ASI as an institution and ignoring the court mandate to ASI).

She does not present the arguments of the Hindu side. She does not even quote the Allahabad High court judgment even though the book came out well after that and has other references that date later than the Ayodhya judgment.

This is plain misleading. The implication of her arguments is probably that we should recognize the sacred geography for academic purposes, but should not try to relive it in the present. Her deception on Ayodhya (and Dwarka) has been, to use Diana’s own words for Sheldon, masterfully demonstrated by Abhinav Agarwal in India: A Sacred Geography

A useful byproduct of the book is a list of arguments that can be thrown at India deniers. After all, a Harvard professor has to be right.

Overall, the book is a great compilation and a cogent argument for the spiritual geography of India. Please read with a curious mind and eyes wide open. There are beautiful stories, but biased and misleading narratives as well. More importantly, become a pilgrim of your own land and tell your own stories.

India: A Sacred Geography is available on Amazon. 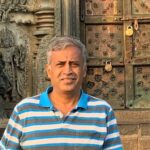 Ramanujam lives in Mumbai. His interests include Indian temples, art, architecture and travel stories. He is the author of the travel photo-story, "The Joy ofRead more