A Hindu Theology Of Liberation: Not-Two Is Not One by Anantanand Rambachan 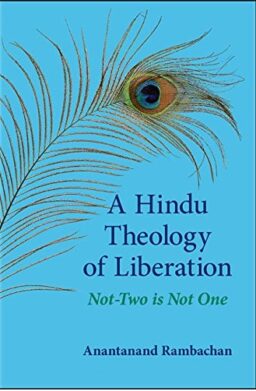 In A Hindu Theology of Liberation, Rambachan applies ‘the core teaching and values of the Advaita tradition’ to the issues of ‘patriarchy, homophobia,anthropocentrism, childism and caste’. He argues that the teachings of Advaita ‘conflict with and challenge’ (p. 188) these practices, and recommends reforming Hinduism by ‘overcoming the brahman-world dualism’ (p.65) and repurposing its ‘not-two’ teaching of liberation to serve social justice.

The introduction provides an entrée to the Advaita (non-dual) school of Hinduism and establishes Rambachan’s main topic, ‘The Need for an Advaita Theology of Liberation’ (p. 4). Drawing on Christian liberation theology, Rambachan advocates recasting discussion of liberation in Advaita: ‘no longer narrowly construed as emancipation from suffering in a future life’, it ought to encompass ‘freedom from poverty, powerlessness, and injustice in this life and world’ (p. 5) as well. Chapters 1–4 summarize key concepts of Advaita, whereas chapters 5–9 present the social issues that, allegedly, could benefit from the insights of Advaita. The conclusion gathers the ‘normative discussion’ and the ‘normative arguments’ (p. 8) into 32 exhortations on how Hinduism must be (re)interpreted as a tool for social justice.

Rambachan initially presents Advaita as ‘one of several Hindu theological traditions’ (p. 1), but then treats it pars pro toto for Hinduism itself. This is problematic because, in addition to the texts canonical in Advaita (Upaniṣads, Brahmasūtras and Bhagavadgītā), Hinduism also includes the Itihāsa-purāṇa tradition, Āgama texts and other smṛti literature. Temple worship, ritual practice and bhakti build on the Vedic revelation; indeed, they constitute a continuing revelation that brings Vedānta (Advaita included) into the life-world of the Hindu householder. Thus, a question arises: has Rambachan chosen the proper object for his inquiry or does his ‘social justice’ criticism of Advaita reflect a misconception about Hinduism?

Hinduism teaches two dharmas: pravṛttidharma and nivṛttidharma. The former is instituted by the Creator (Prajāpati or Brahmā); it is hegemonic, material and socio-political. The latter transcends both the Creator and the cycles of cause and effect, including the attainment of heaven. Pravṛttidharma governs being-in-time with natural and ethical laws, which constrain all transactions to proceed in a rule-governed way. Its paradigm is sacrifice (BhG 3.10), which is fuelled by desire (BhG 2.53 and 9.21). Nivṛttidharma, by contrast, has knowledge rather than sacrifice as its paradigm: it is anti-hegemonic, ecstatic and an-archic (Ka.Up. 1.2.14, BhG 18.66). Renunciation shatters sacrificial logic by critiquing desire, the impelling factor in sacrificial order (cf.Vedic injunctions of the type svargakāmo yajeta, ‘one who desires heaven should sacrifice’). The maximization of desire requires ever greater and bloodier sacrifices, with the bloodiest sacrifices aiming at the attainment of heaven. Nivṛttidharma, however, aims at neither kingship nor heaven, but at absolute liberation in Brahman, which transcends time, causation and thinghood.

As an economy of these two dharmas, Hinduism embraces both the welfare of the world (lokasaṃgraha, BhG 3.20–25) and the supreme felicity of the individual (mokṣa). To be a Hindu is to live pursuing the four goals of dharma,artha, kāma and mokṣa such that one makes a contribution to this world even as one prepares to dehisce from it. Whereas in Judaism the focus is on law and in Christianity on faith, Hinduism primarily developed as an analysis (mīmāṃsa) of (sacrificial) action and its limits. René Girard correctly identifies the relationship between desire and sacrifice: for him, Christianity, through the crucifixion, reveals this insuperably. But Hinduism has long critiqued the sacrificial order, which is fraught with violence, finitude and unending cycles of reward and punishment. In the Bhagavadgītā, Kṛṣṇa instructs Arjuna to act without motivation, without craving results and for the good of the world, while displacing attachment with knowledge and devotion to Brahman. Thus, desire (kāma), the agent (kartṛ) and the effect of action (karmaphala)—the key moments in any action—are deconstructed. Embodied life is inescapably political: thus, an individual must follow the dharma of his society and gov-rnment. But as absolute justification of one’s political identity is impossible, Hinduism recommends transcending it not only in this life but also hereafter (i.e. in a heavenly afterlife).

In defending his recasting of Hindu liberation, Rambachan uncritically raises an old trope: is  Advaita a philosophical or a theological tradition? He critiques Radhakrishnan’s account of Advaita as ‘a purely philosophical scheme’ (p. 2); Śaṅkara’s insistence on the category of revelation suffices to establish ‘his work is theological’ (p. 4). However, the contrast between ‘theology’ and ‘a purely philosophical scheme’ is a function of the opposition between ‘faith’ and ‘reason’ in Christianity. Although Catholicism developed a profound exposition of faith, ‘purely philosophical’ schemes were never absent: Augustine is avowedly a neo-Platonist and Aquinas a neo-Aristotelian. Theologians disputed the nature of ‘faith’, with views ranging from Augustine’s credo ut intelligam to Tertullian’s credo quia absurdum. But once Luther declared his solefidean perspective, theology had to avoid the heresy of philosophy: rather than a rational, ethical theologia gloriae, it had to be a historical and scripture-centred theologia crucis.

Indologists thereafter projected the conflict between philosophy and theology onto Hinduism. Paul Hacker pitted living Hinduism against a fictional original: traditional Hinduism was religious, whereas ‘neo-Hinduism’ was philosophical, universalist and ethical. Hacker specifically blamed Advaita for enabling neither ‘ethical behavior’ nor ‘interpersonal relationships’, and argued that a non-dualist ethics was a ‘logical impossibility’, indeed, a ‘mon-strosity’ (Hacker 1995: 305–06). From a Hindu perspective, these dichotomies are category mistakes: in Hinduism, philosophy and temple worship are both called darśana. Rambachan rightly notes the epistemological primacy of Veda for Śaṅkara, but when he opposes this primacy to argument (tarka) and emancipatory experience (anubhava), he misconstrues the nature and function of śruti. Rambachan’s exclusive advocacy of scripture approximates Luther’s doctrine of sola scriptura more than it does Śaṅkara.

In a second step, Rambachan brings Advaita into dialogue with liberation theology, ‘the major Christian theological achievement of the twentieth century’ (citing Ferm 1986). The ‘distinguishing tenet of liberation theology is a “preferential treatment of the poor,” expressed passionately in a religiously motivated commitment to liberate the oppressed from injustice and suffering’. Liberation theology helps victims by challenging and dismantling ‘unjust economic, social and political systems’ (p. 5). In contrast to this understanding of liberation theology, which emerged after Vatican II, Rambachan interprets liberation theology as an opportunity for Advaitins to view the world ‘positively’. ‘Too much energy has been expended in Hinduism in establishing the so-called unreality of the world and too little on seeing the world as a celebrative expression of brahman’s fullness … [T]he world does not have to be rejected, negated or argued away … Not-two (advaita) is not to be construed simplistically as one’ (p. 8).

Outwardly, Rambachan’s argument appears epistemologically persuasive and ethically mandated. Hinduism, equated with Advaita, misunderstands itself. It conceives of Brahman as one, relegating the empirical world to māyā or illusion. This differentiation leads Hindus to devalue the world, engendering social evils of every kind from destruction of nature to discrimination against particular individuals. If we reject the traditional understanding of Brahman as one only (as opposed to ‘not-two’) and view the universe as also Brahman, we can repurpose Advaita towards social justice. Liberation then becomes liberation from patriarchy, homophobia, etc.

Commonsensical as it may seem, this thesis contains many unwarranted assumptions. Lexically, the translation of kāma as ‘greed’ is impossible. Rambachan uses this translation to subvert the Advaitin’s account of the emergence of phenomenal reality from nescience (avidyā → kāma → karma → janma) and to introduce an ontological dualism in its place, even though he recognizes that it is a mistranslation (p. 77). Textually, the metaphor of the snake and the rope, which Rambachan cites as proof that Hinduism denies ‘meaning and value’ to the world (pp. 7 and 134), is canonical in the exegetic tradition of Advaita, which is precisely what Rambachan defines as Hinduism. Philosophically, the snake and the rope signify phenomenal and transcendental realities. The Upaniṣads and the Brahmasūtras critique empirical reality as impermanent and the abode of suffering. These two realities are not two objects for the same experiencer, the way we can perceive both a rope and a snake or sometimes confuse the one for the other. The perceiver of the phenomenal world is an ego-subject, whereas the perceiver of ontological being is the intellect. The metaphor clarifies an ontological pedagogy. In terms of the Christian perspective Rambachan draws on, Christ appears to most people as a helpless victim, but to the knowing few he is the Messiah announced by the Hebrew prophets. Rambachan’s hermeneutics would imply that the view of Christ as not an ordinary mortal devalues ordinary men. This is an absurd theology.

Critiquing Advaita for its ‘other-worldly’ metaphysics is thus logically fallacious, theologically disingenuous, textually indefensible and ethically suspect. Saṃsāra and suffering are real enough: otherwise, we would not need liberation. Conversely, at the summit of the epistemological inquiry into reality, when the subjective ego has been bracketed, the world ceases to be a phenomenon. Rambachan creates a false dichotomy between ontological self-knowledge and world affirmation by reducing the insight into Brahman and the perception of the world to a single empirical plane, thereafter resolving this dichotomy by claiming that  Brahman and the world are ‘not-two’.He then imports this dichotomy into an equally unwarranted opposition between progressive liberal activism (Christianity) and traditional theological hermeneutics (Advaita), finally censuring Advaita for ‘interpretations … of liberation that seem to negate and devalue the world and advocate indifference to suffering’ (p. 87).

But are the phenomena Rambachan cites, child sexual abuse and female feticide (pp. 149–50), really the result of a misguided theology (Advaita) or do more mundane explanations exist? Rambachan notes, ‘Patton … uses traditional exegetical arguments to establish that there is no scriptural justification for female infanticide. Although … there are current “rites” performed for female infanticide, … these lack traditional authority’ (p. 160). This admission nullifies Rambachan’s inquiry: if a gulf exists between the normative scriptures and contemporary practice, what good is reforming those scriptures? And if people have ignored scriptural prohibitions, what chance they will heed Rambachan’s exhortations? The desire to provide Hinduism with ethics is commendable, but ultimately superfluous. Rambachan secures pro-gressive change at the cost of impoverishing human life. We might also ask: why these topics, in particular? Why not animal rights or climate change? Why not abortion rights and birth control? Or indigenous rights and cultural appropriation? Rambachan as little provides a rationale for his selection as he makes the case that ‘more’ theology is the answer. Better governance, non-violent resistance and democratic discourse are more effective solutions to social problems than theology and speaking on behalf of the Creator.

(This review was first published by academia.edu)

Vishwa Adluri is Professor in Religion and Philosophy at Hunter College, City University of New York, USA, where he specializes in Ancient Philosophy, 20th CenturyRead more