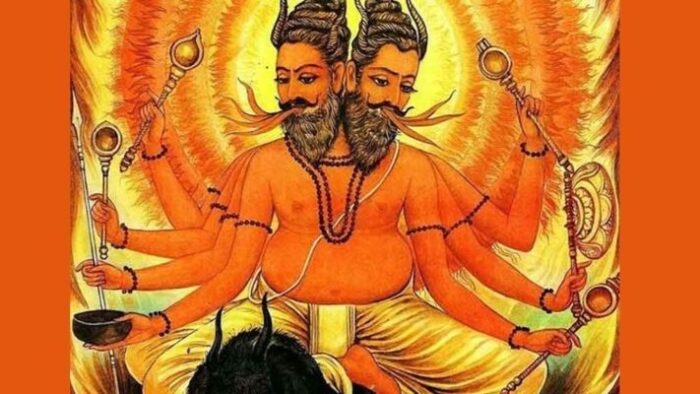 Vedas are said to be anādi (beginingless), apauruṣeya ( non-authorship) and considered to be the treasure house of knowledge, while it is also being held as the very breathe of Paramātmā (Supreme being)[1]. Since the Vedānta truths beyond the grasp of human cognition the generous minded Mahaṛṣis ( Sages) with a far-sighted approach, have made the Smṛti, itihāsa and Purāṇa for the benefit of mankind.

They have made a classification of purāṇa, which are eighteen in number. Although each of these purāṇa, is said to be unique in terms of delivering the Vedānta philosophy, Agnipurāṇa is the one which stands out of them for advocating the Vedāntic principles along with Śāstra-s such as Sāhitya, Vyākaraṇa, Āyurveda etc., which are useful to human beings.

This purāṇa is said to be superior among others, for being perceived it to be Braḥmasvarūpa ( the embodiment of Supreme braḥman) this assertion is said to have made by Agnibhagavān himself[3]. Though elements such as Rasa ( sentiments), Chandas ( metre), Alaṃkāra ( figure of speech) etc., are considered to be important according to Sāhitya the employment of Rīti, if made in proper proportion in Kāvya, alone determines the success of a poet. Hence Rīti is considered to be the soul of a poetry the assertion by poet Vāmana when talking about its significance, “Rītirātmā Kāvyasya “[4].

Viśvanātha while acknowledges that Rīti whose core function in a poetry is about enhancing the beauty of the latter, “utkaṛṣahetavaḥ proktāḥ guṇālaṃkārarītayaḥ “[5]. In line of this tradition, we have the legendary poets such as Daṇḍī[6], Bharata, Bhoja who teach us about the crucial functions of Rīti in a poetry through their monumental works of Kāvyādaṛśaḥ, Nāṭyaśāstra[7] and Sarasvatīkaṇṭhābharaṇa respectively.

Following this, matters pertain to the definition on Rīti being offered in Agnipurāṇa its (Rīti) classifications, different perceptions among rhetoricians on the same, its collective functions seen in a poetry are being delved in this paper.

” In order to achieve eloquence in the art of speech Rīti is being preached” , says Agnibhagavān to Sage Vasiṣṭha-

This is being classified into four types according to Agnipurāṇa–

The word, “Rīti” is derived out of a root verb in Sanskrit, called rīṅgatau[10] ( gatiẖ= movement). Rīti expects the assistance of Kāvyaguṇa[11] such as Śleṣaḥ, Prasāda, Samatā etc., as the former cannot work independently without the latter. When the word, “Rīti” is being produced thus with the help of this verb, a question arises here immediately as to whose movement is described here. It is the Kāvyaguṇa which becomes functional after entering into Rīti such as Vaidarbhī, Gauḍī etc. Though the number of  Rīti are said to be four according to Agnipurāṇa, there have been different views among Ālaṃkārikā-s regarding its count.

For instance if the view on the number of Rīti according  to Vāmana is three, while the same being perceived by Ālaṃkārikā–s such as Bharata, Daṇḍī, Bhoja and Viśvanātha are stated to be 5,2,6 and 4 respectively. It is understandable that the number of Rīti which is arrived by Viśvanātha, following the footsteps of Agnipurāṇa[12].

It should not be construed, as Rīti having originated from regions such as Vidarbhā, Gauḍā, etc while going by their names. This ( name of Rīti) implicitly states that poets associated with regions of Vidarbhā, Gauḍā, Pāñcālā, Lāṭa stuck to that particular style of composing ( poetry) later became the staunch promoters of  the same, thus Rīti came to be called with its origin of their respective regions[13].

Duṣyanta having embarked in an hunting expedition immersed in the beauty of Śakuntalā, who was seen at the hermitage of Sage Kaṇva. The sentiments of Śṛṅgāra, Vīra ( valour)[19] representing the three guṇa ( Ojas-Prasāda-Mādhurya ) can be seen in this verse.

According to Agnipurāṇa the occurence of this Rīti shall happen when the structure of words in a poetry, is understood in a lengthy compound style. While a definition is offered by poet Vāmana on this Rīti that, if the two guṇa, Kānti ( some changes are effected on the structure of words by a poet to make it more impressive) and Ojas are employed together paving way for the creation of this Gauḍī Rīti.

These words are of Lakṣmaṇa who lauds the valour being displayed by Rāma over breaking the Śiva ̍ s bow. The sentiment Vīra representing the two guṇa ( Ojas-Kānti ) can be viewed in this verse. The structure of words seen here are credited with lengthy compounds, in compliance to the definition of this Rīti.

The functions of this Rīti can be seen in a context where the setting up of words are made without the element of lengthy compounds keeping the delicate nature of words in mind. However Vāmana slightly defers from his view on this Rīti. According to him, the creation of this Rīti in a poetic work shall be done if the structure of words are left to the accompaniment of two guṇa known as Mādhurya and Saukumārya[23] ( employing words that have the element of delicate nature). Of these three Rīti Vāmana considers Vaidarbhī being superior[24].

An old lady makes effort of preventing a youth who is trying to sleep on a pavement in front of a house, is described in this verse. The structure of words seen in this illustration are found to be in accordance with the definition of this Rīti, which represents the two guṇa ( Mādhurya, Saukumārya).

This Rīti though forgotten by the poets, is understood in a context where the structure of words are found to be in a comprehensible fashion and free from the influence of mass lengthy compounds. Viśvanātha lists out the benefits of this Rīti, which is used far and wide in a poetic work through his text Sāhityadarpaṇa thus the relevance of this Rīti in poetry has been recognized by him, is proved. According to him, the functions of this Rīti taking place between Vaidarbhī and Pāñcālī.

Some attributes such as words with delicate nature, devoid of lengthy compounds, employing suitable adjectives depends on the context which define the characteristics of this Rīti.

The sunrise is being described here. The rays of sun from eastern direction fall on mandāra flower, making it appear as celestial Pārijāta flower (which is believed to be in golden colour), the sunrise which is responsible for the union of Cakravāka birds[30], and becoming a cause for blooming of lotus flowers. The significant characteristics such as devoid of mass lengthy compounds in the structure of words, insertion of words containing a delicate syllable set up , employing appropriate adjectives depend on the circumstances of a poetry which form the basis of definition of this Rīti, can be seen in this verse.

Details of Abbrevations used as references for books:

[12] Viśvanātha gets inspiration from Agnipurāṇa for Rīti too since he already seized off the Rasa (Sā.Da- 1.3)

[15]  words that have the characteristics such as saṃyuktākṣara (conjunct consonants), visarga (representing the two dots: according to Vyākaraṇa Śāstra), first,second,third,fourth letters of each varga ( syllables start from ka,ca,ṭa,ta and pa consisting of 5 letters according to Sanskrit grammar) repha varṇa (the letter ra) and lengthy compound fashioned words.

[19]The submission to love with Śakuntalā by Duṣyanta is seen here implying Śṛṅgāra, while Vīra is exhibited by the latter through the hunting gesture, which is considered to be one of the prime duty of Kṣatriya-s

[30] According to Kavisamaya (poetic legacy) Chakravāka birds are believed to be in union with their male counterparts during daytimes, while being in separation during night times.