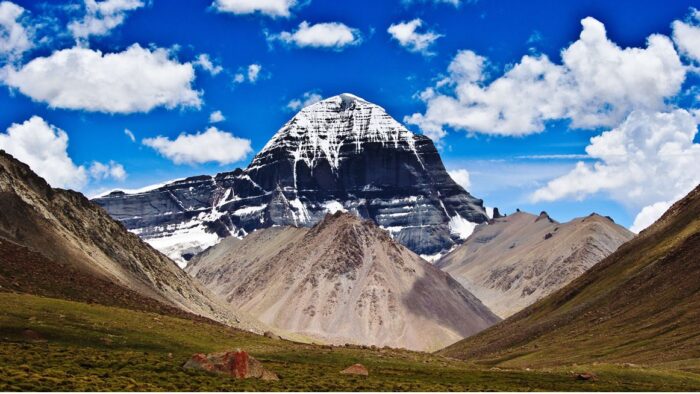 Physical geography (also known as physiography) is one of the two fields of geography which deals with the processes and patterns in the natural environment such as the atmosphere, hydrosphere, biosphere, and geosphere, as opposed to the cultural or built environment, the domain of human geography.

Physical geography can be divided into several branches and one of them is geomorphology.

Geomorphology is the scientific study of the origin and evolution of topographic and bathymetric features created by physical, chemical or biological processes operating at or near the Earth’s surface.

The physiography of the earth is poetically described in the Ṛgveda[1] thus:

“The earth abounds in heights, bears the burden of mountains and supports the trees of the forests in the ground (kṣmā). She quickens, for she scatters rain and the showers of heaven are shed from the lightning of her clouds. She is great (mahī), firm (dṛḍha) and shining (arjunī)”.

Perhaps, the Rgvedic Aryans had the concept of knowing slopes also of a region by the help of rivers. By the time of the Sāmaveda, Yajurveda and Atharvaveda, the Indians had come to acquire sufficient knowledge of physiography and geomorphology.  The following geographical terms are a proof: उपह्वर – mountain slopes, इरिण – cleft, शिला – stony place, क्षयण -habitable place, ह्रद – lake, लोप – rugged land, सूर्व – good soil, किंशिल – pebbly places and अनूप – marshes[7]. The Pṛthvī sūkta (XII) of the Atharvaveda furnishes a concise account of physiography like mountains, forest lands, rocky places, plain areas and perennial streams or slopes.

The celebrated epic Rāmāyaṇa reveals very rich and accurate knowledge of geomorphological patterns. Some of the geographical patterns quoted are: “And beautiful forests and woods, watery expanses of mighty volume and mountain with flat places”[8].

“Rivers and rills and plateaus, caverns and fountains”[9]:

Two chapters (Bhūmi Parva -11 and 12) of the Bhīṣma Parva of Mahābhārata contain considerable information on physiography. This epic mentions large tracts of deserts several times. The soil of a forest is described as: “Its soil was uneven and covered with blocks of stones, loosened from the hills”[11]. The Mahābhārata thus evinces that the author has carefully observed and was acquainted with the geomorphological process of soil creep.

In Pāṇinī’s Aṣṭādhyāyi too we come across important geomorphological patterns. A river moving and breaking its banks is termed as भिन्द्य[12], glacier is named as हिमानी[13] and so on.

There are many references to geomorphology found in the Purāṇas as well. The Vāyu Purāṇa refers to various types of topography namely lakes, barren tracks, rocky troughs between mountains (38.36): पश्चिमायान्दिशि तथा येऽन्तरद्रोणिविस्तराः। and longitudinal troughs lying between two filament like mountains (38.45):

Mention is also made of a large number of hot springs in a mountainous region (38.78):

In the Mārkaṇḍeya Purāṇa (56.21-2) a peculiar type of topography “in the Kimpuruṣavarṣa and seven other countries” where water bubbles up from the ground is mentioned.

The obliteration of relief due to dissolutional erosion is described in the Viṣṇu Purāṇa thus (VI.3.21-2):

“The three worlds, consumed by these suns, becomes rugged and deformed all over their mountains, rivers and seas and the earth bare of verdure and destitute of moisture alone remains resembling in appearance the back of a tortoise”.

The acquaintance with the great obliteration of relief through tectonic processes, upheavals and vigorous erosions by the ancient geographers can be seen in the Matsya Purāṇa (122.II).

With slight variations several Purāṇas classify the soils of the subterranean regions in seven categories as black, white or yellowish, blue or red, yellow, gravelly, hilly or boulder and golden hued. For instance, in the Brahma Purāṇa (221.2-3) the soil classification is as follows:

Few Purāṇas assert that on the Meru mountain four types of soil or rocks are found. In the Varāha Purāṇa (75.15-7), it is mentioned as white in the east and yellow in the south: पूर्वतः श्वेतवर्णः पीतश्च दक्षिणेनासौ। black on the west and red on the north: भृङ्गपत्रनिभश्चासौ पश्चिमे पार्श्वमुत्तरतस्तस्य रक्तवर्णः विभाव्यते॥

Mānasāra, perhaps the earliest and the most important architectural treatise, too furnishes considerable information on soils, their colour, taste, texture as well as slope of a region. The Samarāṅganasūtradhāra typifies three varieties of terrain as jāṅgala, anūpa and ordinary. According to the medical treatise Suśrutasamhita there are two types of soil examinations as general and special. Even in Buddhist and Jaina literature we have geographical works like Vṛhatkṣetrasamāsa and Aṅguttaranikāya etc.

We thus gather from the above that in ancient India the knowledge of geomorphology was well developed on scientific lines. The techniques of knowing the slope of an area by means of a flowing river were developed. Various types of topographies such as springs, water-falls, mountainous plateaus, eroded lands etc. along with the geographical terms were used. Land classification such as fertile, infertile, cultivable etc. and soil classifications such as black, yellow, red etc. which are in vogue even at present can be regarded as an important achievement of the Ancient Indians.