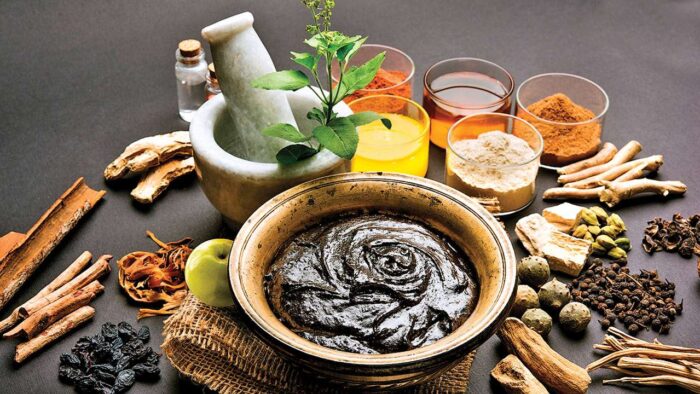 In Indic knowledge systems, the purāṇas are at the third hierarchical level, which carries the essence of Vedas. Though they are ancient, their importance is being substantiated (purāpi navaṃ bhavati) in the society by teaching Vedic way of lifestyle through moral stories, in which, science and technology were explained contextually. Those are encyclopedic in nature. For every mundane obstacle, there will be a solution in purāṇas. Presently, the entire world is suffering from COVID-19. Lacking immunity is the cause to be affected by this pandemic. Boosting immunity is one of the solutions to face this virus. During this pandemic, several traditional methods of immunity booster were practiced and resulted positively. In this juncture, interestingly, as a solution, a medicinal preparation is mentioned as a rahasyavidya (secret knowledge) in 140th adhyāya (yuddhajayārṇava) of Agnipurāṇa. In this preparation, 36 medicinal drugs were used, and it was also praised as mṛtasañjīvani and sarvagohāriṇi. Through classical literature, it is a difficult task to identify the drug and preparation method. So, in this study, the importance of 36 drugs will be highlighted and the medicinal efficacy of individual drugs will also be cross-referred from Ayurvedic materia medica along with their noted botanical names. This study may give scope to test this clinically. Similarly, it may encourage the young traditional scholars to study the purāṇas scientifically for the welfare of the society.

Vedas are the source of knowledge (vedo’khilo dharmamūlam) [1]. For every scientific idea, there will be a fundamental reference in the Vedas. As the purāṇas are also conveying the essence of the Vedas, they are at the third level in Indic knowledge systems, and collectively, they are also being considered as pañcamaveda [2]. Though they are ancient, their importance is being substantiated (purāpi navaṃ bhavati) in the society by teaching Vedic way of lifestyle through ethical stories. Such a lifestyle may balance a person’s physical, psychic, social, and spiritual condition. There are 18 mahāpurāṇas, which are encyclopedic in nature. These scriptures (purāṇas) always support the harmonic environment between man and nature. Thus, each purāṇa contains the messages of environmental conservation [3]. In our shastras, the primary importance is given to physical fitness, because, the physical body is the instrument for all activities (śarīramādyaṃ khalu dharmasādhanam) [4]. Since creation starts, every living thing getting a disease and getting rid of it is a common phenomenon. Lacking immunity is the primary cause to get a disease. Medicinal plants are playing a vital role in boosting immunity. The purāṇic literature describes all aspects of the medical system including plant science [5] and veterinary medicine [6]. Some of the medicinal preparations seem more unique than Ayurveda. Such preparation is found in Agnipurāṇa, one of the 18 major purāṇas. This was also praised as mṛtasañjīvani and sarvagohāriṇi. This medicine may be useful as an immunity enhancer in this pandemic COVID-19. There are 36 different medicinal herbs involved in this preparation, in this study, the importance of 36 drugs will be highlighted and the medicinal efficacy of individual drugs will also be presented from Ayurvedic materia medica along with their noted botanical names.

Agnipurāṇa is one of the 18 mahāpuranās. Its title itself indicates that it was narrated by Agni to Vaśistha. It contains 16000 slokas distributed in 383 Adhyayas. It has not only the compilation of health science information from various Ayurvedic treatises but also carries information regarding some gaps, secrets, and some issues which are not discussed in Ayurveda. For instance, the preparation of 36 padakas, etc. Basic principles of health, anatomy, physiology, gynecology, medicine, etc. are available in Agnipurāna which was referenced from Suśruta Samhita, Astanga Sangraha, Vrnda Madhava and Cakradatta, etc [7].

According to Ayurveda, health depends on immunity (balādhiṣṭhānam ārogyam) [8] and food is the main factor to enhance immunity. Traditionally, in Indian cuisine, herbs and spices are used in cooking according to their nutritional benefits and their ability to strengthen our immune system. in General, the Indian kitchen itself is considered a small natural dispensary. According to the World Health Organization, around 80% of the world population uses herbal medicines for primary health care. There are certain popular herbs viz. guduchi, ashwagandha, garlic, turmeric, and ginger are used to boost immunity [9].

During COVID 19 crisis, the Ministry of AYUSH also gave guidelines for Ayurveda’s immunity-boosting measures [10]. According to this, under general measures:

In the above measures, 99% of the ingredients are herbs that are limited and commonly used in our daily food and drinks not only for enhancing immunity but also for improving our digestive system. Interestingly, in Agnipurāṇa, there are 36 drugs mentioned and described a medicinal preparation out of those herbs and used it as mṛtasañjīvani and sarvagohāriṇi. This concept will be explained in detail further.

The medicinal Efficacy of 36 Padakas (drugs)

There is a concept of ‘ṣaḍtriṃśatpadakāni’ (36 drugs) in 140th adhyāya (yuddhajayārṇava) of Agnipurāṇa [11], where all 36 different drugs are used in a medicinal preparation and used as sarvagohāriṇi. This knowledge was kept under rahasyavidya (secret knowledge) during the war. Presently, the entire universe is suffering from bio-war with pandemic COVID 19, and the death rate is creasing day by day. There is no sufficient vaccine for it so far. At this juncture, this preparation is given scope towards knowing its medicinal importance. Ayurvedic lexicons like Bhavaprakasha [12], Raja Nighantu [13], and ENVIS website are followed to get the therapeutic information of each herb along with noted botanical names. The entire information is stated in the table below.

Table 1: List of 36 padakas (drugs) depicted from Agnipurāna along with their botanical names and therapeutic uses

There are 36 medicinal drugs involved in this preparation, in which one is Saidhava (salt) and the remaining 35 are herbs. The herbs haridrā, jīraka, dhaniyā, śuṇṭhī and yavānikā are only matching with the list stated by AYUSH. According to Agnipurāṇa, the combination of 36 is useful not only for an immune booster but also works on various diseases. Although the drugs/herbs are common in the Ayurveda and Agnipurāṇa, the combination and the preparation are unique.

While gathering the medicinal information from Ayurveda lexicons and materia medica, in some places, there was a lot of confusion in multiple entries for one herbal entity. For instance, the balā (Sida cordifolia) herbs have three types viz. mahābalā (Sida rhombifolia) and atibalā (Abutilon indicum), nāgabalā (Grewia hirsuta). Similarly, kaṇṭakārī has two types such as vārtākī (solanum indicum) and kaṇṭakārī (solanum xanthocarpum). The medicinal term ‘eraṇḍamuṇḍī’ was not found anywhere in the Ayurveda materia medica. There are two similar terms repeated at 9th (taken as pippalīmūla) and 32nd (considered as mahābharīvacā) places for pippalī and vacā respectively.

The preparation method is described in brief. But it is not clear which part of the herb needs to be used. The medicine can be taken as cūrṇa (powder) or vaṭikā (tablet) or avaleha (lickable item) or kaṣāya (decoction) or modaka (edible item) or guḍakhaṇḍaka (sweet item). The medicine will be mṛtasañjīvana, when it is taken with madhu (honey) or dhṛta (ghee) or ghṛtantaila (ghee oil) [15]. The dosage should be karṣārdhaṃ (8 grams) or karṣamekaṃ (16 grams) or palārdhaṃ (32 grams) or palamekakaṃ (64 grams) [16].

According to the individual curative factors, there are different combinations stated within 36.  As they mostly act as dīpanas (digestive fire improvers), rasāyanas (rejuvenators), balavardhakas (immune boosters), the first nine herbs cure all diseases. The amalgamation of 1 to 8 and 26 to 27 pacify vata and 4 to 6, 5to 8 and including the 15th one cure kapha diseases. Similarly, the combination of 1 to 3, 6 to 9 herbs and the 11th one is useful in grahaśānti (planetary influence) [17]. According to the information on medicinal usage, 70% of medicinal drugs are working on śvāsa (breath related issues) and kāsa (cough-related issues) which are the majorly identified symptoms in COVID 19. As diabetes mellitus is also a gifted disease due to this pandemic, most of the drugs are working on prameha (diabetic Mellitus).

Undoubtedly, the purāṇas facilitate solutions for current mundane problems, if we study and scientifically look at them. The present study is only focused on bringing out this ignored scientific practice and exploring it with supportive medicinal information from Ayurveda to show its medicinal importance in this COVID 19 pandemic. This preparation is unique and not matching with any mentioned in Ayurveda. Some terminological issues need to be classified with Ayurveda and botany experts. The present work may give rise to study this concept clinically to find further insights. Similarly, this may motivate the young transitional students and scholars to study the purāṇass in a scientific way for the welfare of society.

Watch the video presentation of the paper here!

This paper was presented as a part of a Conference on Puranas and Indic Knowledge Systems, organized by Indic Academy on 26th and 27th March 2021.

Dr. Siva Panuganti is an assistant professor of the MIT School of Vedic Sciences. He is deeply interested in the vast field of Indic KnowledgeRead more