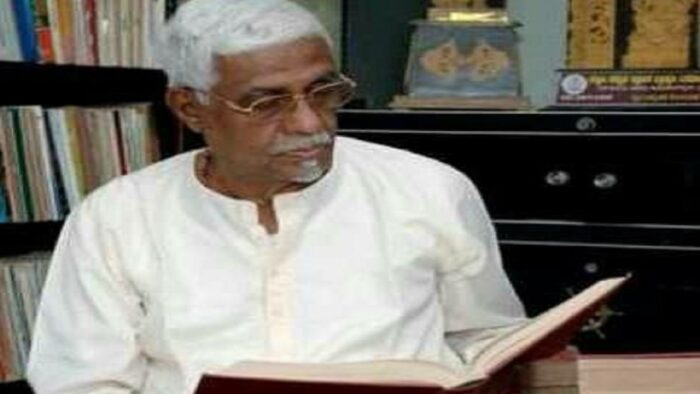 Sri Bannanje Govindacharya, one of the great scholars of Sanatana Dharma, is no more. On the 13th of December 2020, at the age of 84, he passed away at his home in Udupi, Karnataka. A scholar par excellence, his demise is an incalculable loss to the Dharmic community as a whole.

Over six decades, Sri Bannanje made numerous contributions to the literary and philosophical world of the Hindus in the form of original Sanskrit and Kannada works and translations of several Vedic, Puranic, and Vedantic texts into Kannada. In addition to this, he had toured all over the country, and abroad, giving pravachanas to keen audiences on topics related to the Hindu religion and philosophy.

Right from his early days, he made a mark in literary and scholarly circles by his sharp and direct take on issues. He stood out for questioning the norm, and dissecting blind practices. He was an extraordinary Pandita in the Madhwa philosophy. He has written many tens of books on Sri Madhwacharya’s Tattvavada.

Sri Bannanje translated many Sarvamoola Granthas into Kannada. His style of writing was lucid. He had an amazing sway over words and was an excellent poet too. He composed many poems in Kannada and Sanskrit.

In fact, calling his Kannada works ‘poetry in prose’ would not be an exaggeration! He also translated many famous Sanskrit poems into Kannada, including Bana’s Kadambari, Kalidasa’s Shakuntala, and Shudraka’s Mricchakatika.

Sri Bannanje was an institution by himself, as seen by the hundreds of devoted followers he managed to cultivate. His exemplary oratory skills captivated audiences, naturally arousing curiosity in the topics he spoke about. And his mastery of multiple disciplines including Vedas, Upanishads, Tattvavada, Puranas, and Sanskrit meant he was a walking encyclopedia, satisfying the jnana-pipasa or thirst of knowledge that the younger generation had.

It will be no exaggeration to state that Sri Bannanje has played a critical role in reviving interest in Sanatana Dharma amongst youngsters over the past 2-3 decades, in India and abroad. He has given pravachanas running into hundreds of hours, many of which are available in the online world. Millions of views of these pravachanas are testimony to the reach and influence he had amongst the Dharmic population.

Sri Sri Vidyamanya Tirtha Swamiji of Palimaru Matha had conferred on him the title of ‘Vidya Vachaspati’, which was wholly appropriate, given his amazing skill in articulate narration. To the curious mind, Bannanje was the definite refuge for any spiritual or philosophical question that evaded a simple answer. There are hundreds of scholars in our country who can give excellent discourses on popular Itihasa and Purana granthas.

It is no doubt a joy to listen to them explaining the leelas of our Devis and Devatas. But the current generation of Hindus are constantly on the look-out for answers to their “why” questions more than the “what” questions. And Bannanje was one scholar who literally had the answer for every “why” question!

I still recall listening to one of his discourses in which he explained the significance of putting on ‘bahya diksha’ or external symbols in the form of Urdhva-Pundra, Shankha-Chakra Mudra, and Akshata-Angara.

Putting on these symbols thereafter brought an amazing sense of pride, knowing you are furthering the Vedic tradition of thousands of years and the Madhwa tradition of hundreds of years. Such was Bannanje’s ability to instill a sense of pride and purpose in following the path of Dharma. And each of his explanations would be justified on the bed-rock of pramanas!

It was Bannanje’s habit to conduct pravachanas laced with personal anecdotes and examples. I recall another of his discourses in which he narrated a tale of a family trying their best to conduct rituals to ensure the proper sadgati for their forefather. He narrated how their quest for finding out the right propitiatory ceremonies finally met with success and how they conducted a complete parayana of the Yajur Veda samhita.

Bannanje then narrated the incidents that occurred during the parayana and the omens confirming sadgati to the departed soul. To this day, that narration has remained with me, and constantly reminds me of the power of the Veda Samhita!

Every discourse, every book, every poem by Bannanje was similar in its effect. It would leave the listener or reader with a sense of learning and a sense of pride over our tradition and knowledge-system.

Another of Bannanje’s great skills was the deft with which he handled the question of differing sampradayas within the Hindu fold. Being a born Madhwa, and having deeply studied Sri Madhwa’s philosophy, he was naturally inclined towards Tattvavada.

However, he undertook a non-polemic but practical approach towards other Vedantic systems of philosophy. His discourses would be laced with quotes from Sri Shankaracharya’s works when appropriate.

Similarly, he would quote and compare from the works of other writers of the Advaita tradition. All of this showed the extent of study of the other systems that he had undertaken and the healthy respect he had for them.

Sri Bannanje’s wrote the script for G V Iyer’s Sanskrit movie Shankaracharya. The same Bannanje also wrote a Sanskrit commentary on the Namaka and Chamaka of the Taittariya Yajurveda, based on the guidelines in Sri Madhwa’s Rig Bhashya, explaining how every mantra in the two most famous Shiva suktas can be interpreted to extoll the glory of Narayana! Such was his philosophical mastery!

Sri Bannanje was also greatly concerned with the direction our Hindu Samaj was taking of late. He was especially concerned that Hindus were losing touch with the divine language Sanskrit, and thereby losing the treasure of knowledge intricately connected with the language.

Great men like Sri Bannanje come not very often. But they surely do leave behind a treasure-house of literary wealth. Bannanje’s favorite quote was ‘Iravu Sampattalla; Iravina Arivu Sampattu”. Loosely translated, it means “Existence is not wealth; Awareness of existence is the real wealth”. Such ‘Arivu’ not just applies to an individual but also to the knowledge.

Acknowledging merely the body of knowledge that Sri Bannanje Govindacharya has left behind would not be the best way of retaining the wealth he has given us. Utilizing his work, building upon it, and making his dreams of restoring the glory of Bharata would be the real awareness and utility of his wealth.