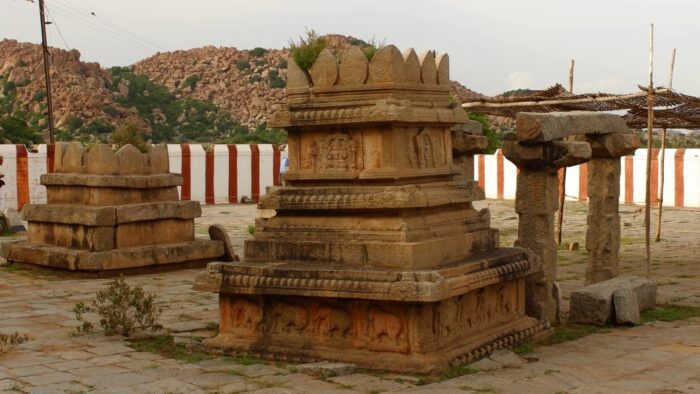 In a ghastly act, miscreants have recently vandalized and destroyed the Moola Vrundavana of the great Dvaita Acharya Sri Vyasaraja Tirtha, located at Anegondi near Hampi in Karnataka. As a stark indicator of the fall in Dharma in our land, this desecration has occurred just after Guru Purnima. There has been all-round condemnation of this incident from people of all walks of life, and especially from the Dharmic Hindu community. The local police reached the sacred spot as quickly as possible and performed preliminary investigations. They have assured a thorough probe into the matter and punishment to the perpetrators of this crime.

The religious leaders belonging to the sampradaya of Sri Madhwacharya were especially devastated with this tragedy. It was only a few years ago that the Vrundavana of another venerated Dvaita Saint Sri Narahari Tirtha was similarly desecrated by vandals. The community restored that Vrundavana and restarted worship in a short time. Having recovered from that tragic incident, this second occurrence has doubled the hurt caused to the followers of the sampradaya.

In the Dvaita tradition, brought to limelight by the venerated Sri Madhwacharya in the 13th Century, Sri Vyasaraja Tirtha occupies a superlative position. He is one of the “Muni Traya” or “the three revered saints” in the sampradaya, along with Sri Madhwacharya himself and Sri Jayatirtha. Sri Vyasaraja Tirtha has innumerable accomplishments to his name, the strengthening and propagation of the Dvaita Vedanta not being the least of them. He is most famous for being the Guru of the great Vijayanagara Emperor Sri Krishnadevaraya in the early part of the 16th Century. Sri Vyasaraja was in fact Guru to at least five of the Vijayanagara Kings!

In the scholarly circles, his three principal works –Nyayamruta, Tarkatandava and Tatparya Chandrika – are recognized as masterpieces upholding the Tattvavada (Dvaita) philosophy. He is credited with guiding many stalwart sanyasis such as Sri Vadiraja Tirtha and Sri Vijayendra Tirtha, many Haridasas such as Sri Purandara Dasa and Sri Kanaka Dasa, and many other scholars. He is also responsible for establishing 732 Hanuman temples all over South India. Many of these 732 temples still survive and are distinguishable by the murthy of Hanuman holding a sougandhika flower in one hand, and by the presence of a bell tied to the tail.

Put simply, the contributions of Sri Vyasaraja to the Dharmic world is unparalleled and therefore the desecration of his Vrundavana is an inexcusable crime against Hindu religious beliefs. However, in an extraordinary response, thousands of devout Madhwas have gathered at the Navavrundavana under the guidance of Swamijis of multiple mathas and have completed the restoration of the Vrundavana within 36 hours. This speaks very strongly about the inherent strength in the Hindu society and the strong determination of the Hindus in protecting their heritage and tradition. All is not lost for us.

Origins of the Vrundavana System

Among the Hindu sampradayas, the two primary modes of performing the last rites of a deceased person has been to cremate the body or to accord a burial. Traditionally, those who were initiated into the Vedas carried maintained three “Agnis” or fires with them throughout their life as a Gruhastha (householder). The three Agnis were Garhapatya, Dakshinagni and Ahavaniya. While it would be out of scope of the present article to elaborate on these three fires, it would suffice to say that the cremation of an individual was initiated through the Ahitagni fire.

On the other hand, when an individual gave up his life as a householder and took on the Ashrama of a Sanyasi or a Pravrajaka, he would give up these Agnis (in addition to severing his ties with his family, and making many other personal sacrifices). There were primarily four types of Sanyasis – Kutichaka, Bahoodaka, Hamsa and Paramahamsa. The Kutichaka took on renunciation even as he remained in contact with his family. However the latter three types of Sanyasis cut themselves off completely from all bondages.

Since there was no ‘Agni’ for a Sanyasi, except the Kutichaka type, a cremation could not be performed and hence his last rites were different from the rest of the Vedic community. Sri Krishnacharya, the author of Smritimuktavali quotes the words of Pulastya and says the following:

In the Madhwa sampradaya itself, there have been examples of some Sanyasis very early in the 14/15th Centuries being given their last rites through disposal in the River Ganga. However, this practice is now completely discontinued.

Over time, the only kind of Sanyasis who took to renunciation were only of the Paramahamsa type. In addition, due to increasing practical difficulties in disposing off bodies via the other two modes, the method of burying the body in a pit came to be sanctioned by the Shastras as the most appropriate one for Sanyasis. Sri Panduranga Vaman Kane, in his ‘History of Dharmashastas’ says the following about the reason this practice came into prominence.

“The reason why ascetics were buried and not cremated appears to me to be as follows; part of the procedure of becoming an ascetic consisted in giving up his Srauta fires….The householder was cremated with his Srauta or Smarta fire but the ascetic having abjured these, was without any fire and was therefore buried”

The method of burial, now the default, consists of resting the body of the Sanyasi in the seated position in a pit and, after covering it with sacred mrittika, an enclosure is built, typically using stone. This construction is known as the “Vrundavana” or Vrindavana. The architecture of the structure is similar to the one used in traditional Hindu houses to maintain the Tulasi plant. In fact, the popular name of the enclosure housing a Tulasi plant is “Tulasi Vrundavana”.

The main source for instructions on how to construct a Vrundavana are from the Smrithyarthasara. Some details are also found in the Baudhayana Sutras. One of the primary rituals involves the invoking of Lord Vishnu into the Vrundavana requesting him to guard the mortal remains (of the Yati).

The remains of the Yati is to be decorated with garlands, Tulasi and sandal paste. The pit has to be dug as deep as the length of the staff the Yati was carrying. A layer of Darbha grass has to be placed at the bottom. Then the body has to be entered into the pit along the chanting of various mantras including the Vyahrutis and the Vishnu Sukta from the Rig Veda-1.22.17.

Sri Madhwacharya has instructed in his Krishnamaruta Maharnava that a place where 12 Salagramas reside is as holy as a Tirthakshetra. When a Yati is interred into a Vrundavana, the usual tradition is to place along with him at least a few tens of Salagramas. Therefore, the sanctity of the Vrundavana is equivalent to that of a Tirthakshetra.

Whenever a most enlightened Sanyasi is entered into a Vrundavana, the number of Salagramas placed inside are even higher. It is well known that when the divine Yati Sri Raghavendra Swamiji entered his Vrundavana (alive) at Mantralaya, more than 1200 Lakshmi Narayana Salagramas were placed along with him. The divinity of such a place therefore exceeds a hundred kshetras. It is verily a Mahakshetra! The extreme sanctity of the place is also substantiated by the fact that thousands and thousands of devotees visit Mantralaya every day and get their desires fulfilled.

The ceremonies involved in the construction of the Vrundavana also include obtaining sacred “mrittika” from the most important rivers of Bharata including Ganga, Yamuna, Tungabhadra and so on and placing them inside the enclosure. The waters from these rivers are also poured on to the Vrundavana during the consecration. Further, other divine objects such as the Chakranike from Dwaraka and conches from seas are placed inside. The consecration is performed in the strict Vedic tradition accompanied by the chanting of relevant Veda mantras. All of this ensures that the Vrundavana obtains a very high divine aura.

Yatis continue to be present in the Vrundavana

The Vedic tradition classifies “jivas” or souls into two basic categories. All jivas belonging to the category of Manushya-gandharvas or lower (that includes ordinary humans, animals and plants) are known as “niramsha-jivas”. On the other hand, all the jivas belonging to the category of Devata-gandharvas and above (including the various Devatas) are known as “samsha-jivas”. The niramsha-jivas are capable on existing in only one form at a time whereas the samsha-jivas can co-exist in multiple forms and bodies at the same time.

Many of our shastra granthas offer numerous examples of such a phenomenon. In the Mahabharata, the eldest Pandava Yudhisthira and the wise Vidura are both avataras of Yama. In the end, Vidura “merges” with Yudhisthira thus ending his stay in that particular form. Similarly, Lord Vishnu existed on this earth in his avataras as Parashurama, Krishna and Vedavyasa simultaneously.

Hindu tradition believes that many of the saints who performed extraordinary deeds during their stay on earth were Devatas who took avatara on earth. The yati of Mantralaya Sri Raghavendra Swamy and Sri Vyasaraja Swamy are the avatara of a Devata called Shankukarna. Sri Brahmanya Tirtha, another exalted sanyasi in the Dvaita tradition, is the avatara of Surya. Many other similar examples abound. Whenever such a Devata ends his stay as a Sanyasi, it is firmly believed that he continues to stay in one form inside the Vrundavana constructed, as they are samsha-jivas. This adds to the sanctity of the Vrundavana and is one of the reasons why many sampradayas consider Vrundavanas to be extremely sacrosanct.

Vrundavanas are extremely sacred kshetras, highly venerated by all Hindus. They contain the presence of the Supreme Paramatma himself, along with several Devatas. In addition, many of them contain the special presence of the departed Yati himself. Any desecration of such places is therefore highly condemnable. Along with our temples and other holy places such as rivers and hills, Vrundavanas are also highly sacred and revered by the adherents of Sanatana Dharma. An attack on any one of them is an attack on Sanatana Dharma itself.

The entire community of Sanatana Dharmikas urges the Government of the day to take strict action to punish such criminals. At the same time, the Hindu community must re-emphasize the importance of such Vrundavanas and other hallowed places and come together with a thorough plan to preserve and worship such kshetras.

(This article was previously published by IndiaFacts)