Unknown Tales from the Puranas: The Three Wives of Vishnu 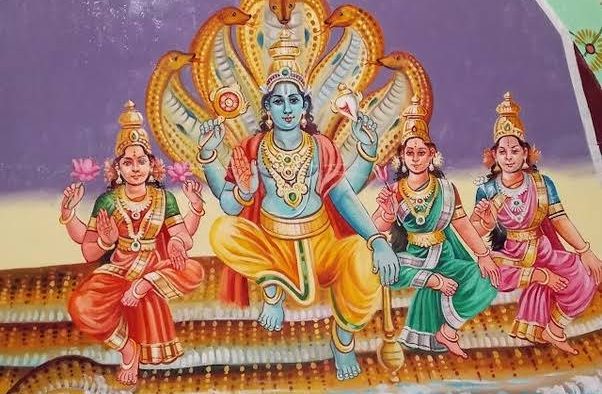 (This is the second article of our new series titled ‘Unknown Tales from the Puranas’. There are myriad stories from puranas and upauranas that are hardly known to most of us. The series will cover such lesser known tales, as well as unknown versions of the popular tales from pauranika sources. Here is a story about three wives of Vishnu from Devi Bhagavata Purana. Read the earlier story here.)

Polygyny, or simultaneously having multiple wives has been a tradition in many human societies. It is the most common form of polygamy, i.e. having multiple spouses. It is still a legal practice in many countries and communities. In ancient India too, this was a very common practice. The reasons may be many; social, physical, practical, financial, and others. It is also common for Hindu deities to have multiple wives. Out of the Holy Hindu Trinity, Shiva is paired with Parvati and Ganga, while Brahma is married with both, Savitri and Gayatri. Vishnu also is said to be associated with both Bhudevi and Shridevi.

But Devi Bhagavata Purana (IX.6-7) has a very different story to tell. The tale unfolds through a conversation between Sage Narada and Shri Narayana. Once upon a time, Vishnu had three wives, Lakshmi, Sarasvati, and Ganga. They used to happily stay together with him in vishnuloka. Once, Ganga happened to stare at Vishnu with an amorous smile. Vishnu smiled back when he noticed her mischievous smile. Though Lakshmi did not react to this exchange, it did not go well with Sarasvati.

Furiously, she accused Vishnu of being more devoted and loving towards the other two. She also blamed Lakshmi for being partial towards Ganga. When Vishnu walked out of the hall, she also confronted Ganga directly. Calling her shameless and desperate, Sarasvati vowed to teach Ganga a lesson. As she came forward to hold Ganga by her hair, Lakshmi tried to stop Sarasvati by holding her.

Sarasvati was livid and cursed Lakshmi to become a tree and a river. Lakshmi at once became a tree and a river. She became dejected, but did not retaliate. Seeing this plight of Lakshmi, Ganga cursed Sarasvati to be born as a river on the Earth, where the sins of the kaliyuga would afflict her. A further infuriated Sarasvati inflicted the same curse on Ganga as well. When Vishnu got to know of this fight and exchange of curses, he decided to intervene in such a way that the curses given by the goddesses became true, yet they did not become too troublesome for the divine women. 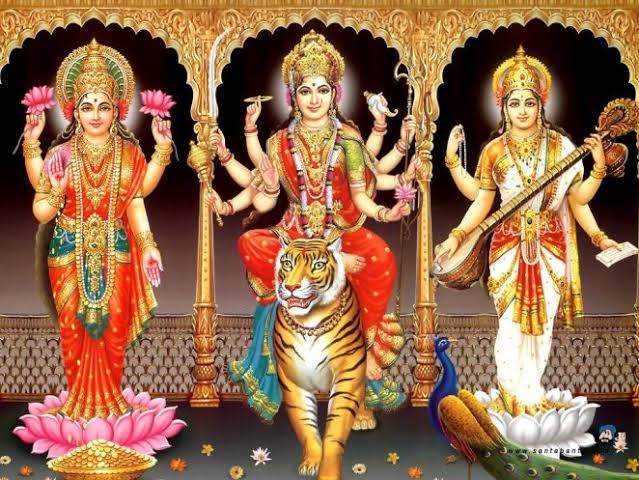 He sent Lakshmi to the palace of Dharmadhvaja, as his non-biological daughter Tulasi. Tulasi was to be married to Shankhachuda, born out of an amsha of Vishnu; thus partially re-uniting with him. She would be the purifier of all the three worlds, and be dear to Vishnu forever.

She was also to become the River Padmavati. Ganga was told to become River Bhagirathi, taken to Earth by King Bhagiratha. The two rivers would considered pious and would free men from their sins. They in their river forms would unite with Vishnu in his Ocean form. In her human form, Ganga was instructed to be married to King Shantanu, who was also born from another amsha of Vishnu.

Vishnu declared that the irritable and fighting Sarasvati should become a river as cursed by Ganga. He did not however suggest any reunion with her in any form. Both Sarasvati and Ganga are driven away from vishnuloka. Sarasvati is sent to brahmaloka to become wife of Brahmadeva. Ganga is sent to shivaloka to be his wife. Only the pious, peaceful, and pardoning Lakshmi is allowed to stay in vishnuloka as his beloved wife.

Vishnu clearly stated that one who has multiple wives, becomes devoid of fame and fortune. He is as good as dead, even if he lives long! A person with a single wife is happy. One who is blessed with a devoted and peaceful wife like Lakshmi, acquires divine happiness, dharma, as well as moksha.

This resulted in all the three goddesses weeping for an antidote to this horrid curse. They did not want to be away from him for long. Lakshmi especially pleaded on behalf of her co-wives as well. Pleased with her devotion, he recommended being away in their respective amshas, and be in vishnuloka in amsha. They would be freed from the sins of the kaliyuga, whenever virtuous devotees bathe in their waters. And after five thousand years of the kaliyuga, they shall return to the abode of Vishnu in their full glory.

This tale, using a very typical puranic motif of curses, counter-curses, and antidotes, braids various threads together. It is fascinating to see how the human emotions of love, anger, jealousy, and the likes are superimposed on the gods as well. On one side, the tale assigns a divine origin and piety to rivers Ganga, Padmavati, and Sarasvati; at the same time indicating the probable mythical reason of Sarasvati never meeting a sea/ ocean, an amsha of Vishnu. It explains why Tulasi is considered sacred and especially important in the worship of Vishnu.

The story also gives a touch of divinity to Shankhachuda and Shantanu, earthly partners of Lakshmi and Ganga. Adding a divine tint to Shankhachuda was necessary because in his war with the gods, Shakhachuda is said to be invincible even for the entire army of Shiva. By claiming that Shantanu is an amsha of Vishnu, the entire Kuru clan gets a divine origin. And in a way, the story also serves to promote monogamy! It also hints at the importance of female chastity, and the power the husbands exerted over them, during the times of compilation of puranas. As on one side, even when cursed, and even in human or plant form, Ganga and Lakshmi are to be married to amshas of Vishnu; while on another, he can just send Sarasvati and Ganga away to Brahma and Shiva. Overall, the puranic tales are deeper than they seem to be!!