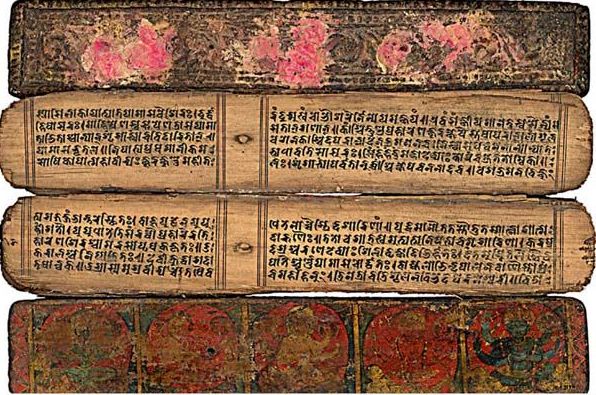 (This is the sixth part of a series of articles on Hinduism. Here are the earlier parts, Part One, Part Two, Part Three, Part Four, and Part Five.)

The Upavedas and Vedas support the classical concepts of pravṛtti and nivṛtti. Pravṛtti (practice, action, behaviour, profession, coming forth) is focus on the outer world, where we engage in action that pertains to the material world. Nivṛtti (rest, abstinence, cessation, retiring, or turning back) is focussed on the inner world, where we engage in contemplation and self-awareness. While the Upavedas correspond to pravṛtti, the Vedas correspond to nivṛtti.

This division between Vedas and Upavedas also hints at the wisdom of the ancient Indians who always managed to bring about a rich synthesis of culture and civilization, where the former is idealistic and the latter is materialistic.

The four Upavedas are explained below.

Āyurveda literally means ‘knowledge of life.’ Modern medicine has largely restricted itself to the treatment of disease. On the other hand, Āyurveda is a holistic science of life that takes into account the physical, mental, and spiritual aspects of a person. Accordingly it tries to ensure the health of body, mind, and soul. More than the treatment of a disorder, it gives a blueprint for a blissful life.

A person who is keeping well is called ‘healthy’ in English. A similar term in Sanskrit is svastha, which translates into ‘being composed in one’s own self.’ The terms used for wellness itself suggest the divergence in approach. Āyurveda has details about food and its processing, nutrition, suggestions for a healthy lifestyle, and a holistic picture of lifestyle choices. Āyurveda also includes what we term today as pharmacology, pharmacopeia, psychology, hygiene, chemistry, botany, zoology, and metallurgy.

While dealing with the microcosm and macrocosm, it ponders about the aspects of cosmology too. While dealing with healthy habits and the calendar of an overall healthy life, Āyurveda gets into the details of philosophy, ethics, law, environment, meteorology, agriculture, cooking, traditions, and culture.

The eight subdivisions (aṣṭāṅgas) of Āyurveda include many aspects of medicine and surgery. Āyurveda is the converging point of many physical and normative sciences.

Some of the foundational and authoritative texts of Āyurveda include these:

Arthaveda is the wisdom of means and methods. The word artha has several shades of meaning where men (women as well), materials, methods, management, and money are all included. We will not do justice to its scope if we translate arthaśāstra as merely ‘economics’ because it includes not only economics but also political science, law, ethics, constitutional studies, defence, management, sociology, trade and commerce, civil and military engineering, etc. All these terms are modern but they very closely correspond to the contents of the Arthaveda texts.

Here are some of the renowned texts of Arthaveda:

According to some sources, Dhanurveda, the science of archery, is counted among the Upavedas. However, we have preferred Arthaveda since it is more far-reaching and substantial. Further, there are no foundational texts specifically under Dhanurveda.

Gāndharvaveda is the wisdom of enjoyment through arts and crafts. Gandharvas are a group of divine artistes and musicians from whom the name is derived. In almost all the Vedas we find references to arts, crafts, artistes, and artisans. The Yajurveda mentions twenty-eight types of arts and crafts. The number of arts and crafts increased over time and later literature mentions the famous sixty-four arts (chaturṣaṣṭi kalā).

Texts of Gāndharvaveda include these:

Nāṭyaśāstra (written by sage Bharata in the period between 200 BCE and 200 CE) is a comprehensive encyclopaedia of all performing arts as well as literature and architecture. It deals with the emotions, sentiments, and moods of theatrical communication which include the physical, verbal, emotional, and material (costumes, stage props, etc.) modes; regional and national approaches; realistic and idealistic methods of presentation; local and universal preferences of creativity; vocal music, instrumental (string, percussion, and wind) music, and lyrics; grammar, figures of speech, stylistics, and prosody; stage construction, building sets, and architecture; costumes, jewellery, and make-up (colour codes, production of colours, and painting); and the education of the actors, dancers, and connoisseurs.

Even today the Nāṭyaśāstra serves the cultural ethos in general and theatre in particular not just in India but also Asia.

Texts of Sthāpatyaveda include these:

Vedāṅgas are the limbs (aṅgas) of knowledge (veda). They are the six auxiliary disciplines which are essential to study and understand the Vedas – phonetics, grammar, prosody, etymology, astrology/astronomy, and ritual.

Sikṣā is the study of pronunciation. Language, in its basic form, is spoken. And speech, which is a complete form of expression, needs proper pronunciation. Without this, the intended meaning may not be conveyed. Apart from the general rules of pronunciation, Sikṣā reveals the sophistication of the Sanskrit language and of the Vedas. Modern phonetics owes much to this ancient branch of learning.

Vyākaraṇa is the study of grammar. Sanskrit grammar, especially the system of Pānini, is universally known for its perfection, richness, depth, brevity, science, and beauty. Vyākaraṇa is not limited to a description of syntactical aspects but elevates the study to the level of philosophy. Since the late 19th century, the Sanskrit grammatical tradition has greatly influenced global linguistic studies.

Chandas is the study of prosody and poetical metre. Sanskrit has a rich variety of poetic metres both in quality and quantity. Often the metrical pattern of a poem is aligned with the meaning and context of the content. The study of Chandas is also essential to understand the verbal utterances of hymns from the Veda.

Jyotiṣa includes astronomy and astrology. The former is the factual description of celestial bodies and their behaviours; while the latter is the interpretation of their influences on humans.

Jyotiṣa heavily relies on mathematics, which was well-developed in ancient India. A calendar is essential for our day-to-day life and so also is our understanding of time and space. At least for this basic purpose, Jyotiṣa is very valuable. Astrology is a probabilistic system that developed by empirical means and has its own place in the scheme of things. Four sections that come under this Vedāṅga are: Jyotiṣa, Gaṇita, Siddhānta, and Hora.

Kalpa is the study of rituals and covers a vast expanse of knowledge. It includes the study of ethics, sociology, polity, traditions, and worship, among others. Kalpa has four main groups of texts:

Dharmasūtras – rituals, duties, and responsibilities at a societal level

Śrautasūtras – rituals and worship of the Vedas

A consolidation of the Śrauta and Śulba sections of Kalpa and their further expansion are a group of texts called Āgamas. They include numerous and voluminous texts dealing with the temple tradition. Āgamas deal with the construction of temples, their art and architecture, the iconography of the images and their aesthetics, as well as the daily, fortnightly, monthly, and annual rituals and festivals observed in the temples. Above all, they discuss the underlying philosophy of the entire system.

Purāṇas consist of old episodes and stories mainly meant for the education of the ordinary people. They deal with lofty theories and fantastic stories that deal with the creation, sustenance, and dissolution of the cosmos; the lineage of gods, sages, and kings; numerous anecdotes of great people; the innumerable religious and secular practices that are good for individuals and society; details about pilgrimages and festivals; titbits about sciences and arts; etc.

Purāṇas also deal with geography, local traditions, history, and folklore of India with great spiritual insight. To use a modern example, Purāṇas were the Wikipedia of those times.

Unlike the Vedas, the Purāṇas were being constantly revised and updated. There are eighteen Mahāpurāṇas (further divided into brāhma, vaiṣṇava, and śaiva,), eighteen Upapurāṇas, and eighteen Upopapurāṇas.

The Itihāsa literature may be placed under this heading. The Itihāsa (literally translates into ‘history’) literature consists of the two great epics from India – Valmiki’s Rāmāyaṇa and Vyasa’s Mahābhārata.

Apart from this, the Purāṇa literature also includes Sthalapurāṇas that pertain to local traditions in different places, taking elements from the local folklore and from traditional stories of the Purāṇas. Needless to say, Sthalapurāṇas are disorganized groups of stories often restricted to the region of their origin. However, it is noteworthy that the Indian tradition does not merely tolerate local values and customs but embraces them.

While the English language uses the word ‘philosophy,’ Sanskrit uses the word darśana, ‘point of view.’ There are six classical schools of Indian philosophy (ṣaddarśana) but the three atheistic schools (Jaina, Bauddha, Lokāyāta/Cārvāka) are also usually included in the list. Of the ṣaddarśana, the Nyāya (epistemology) and Vaiśeṣika (ontology) systems largely deal with the physical level; the Sāṅkhya(method of reasoning) and Yoga (union of body, mind, and soul) systems largely deal with the spiritual level; the system of Pūrva Mīmāṃsa deals with the preparation for philosophical pursuits and explains the philosophy of rituals; and the system of Uttara Mīmāṃsa deals with philosophical pursuit and gives means for transcending rituals. Pūrva Mīmāṃsa is prescriptive and more oriented towards karma (action) while Uttara Mīmāṃsa is introspective and more oriented towards jñāna (knowledge).

These five groups of texts – Veda, Upaveda, Vedāṅga, Purāṇa, and Darśana – lay the foundation for the knowledge and the wisdom of our heritage and cover the concrete and the abstract, the secular and the spiritual.